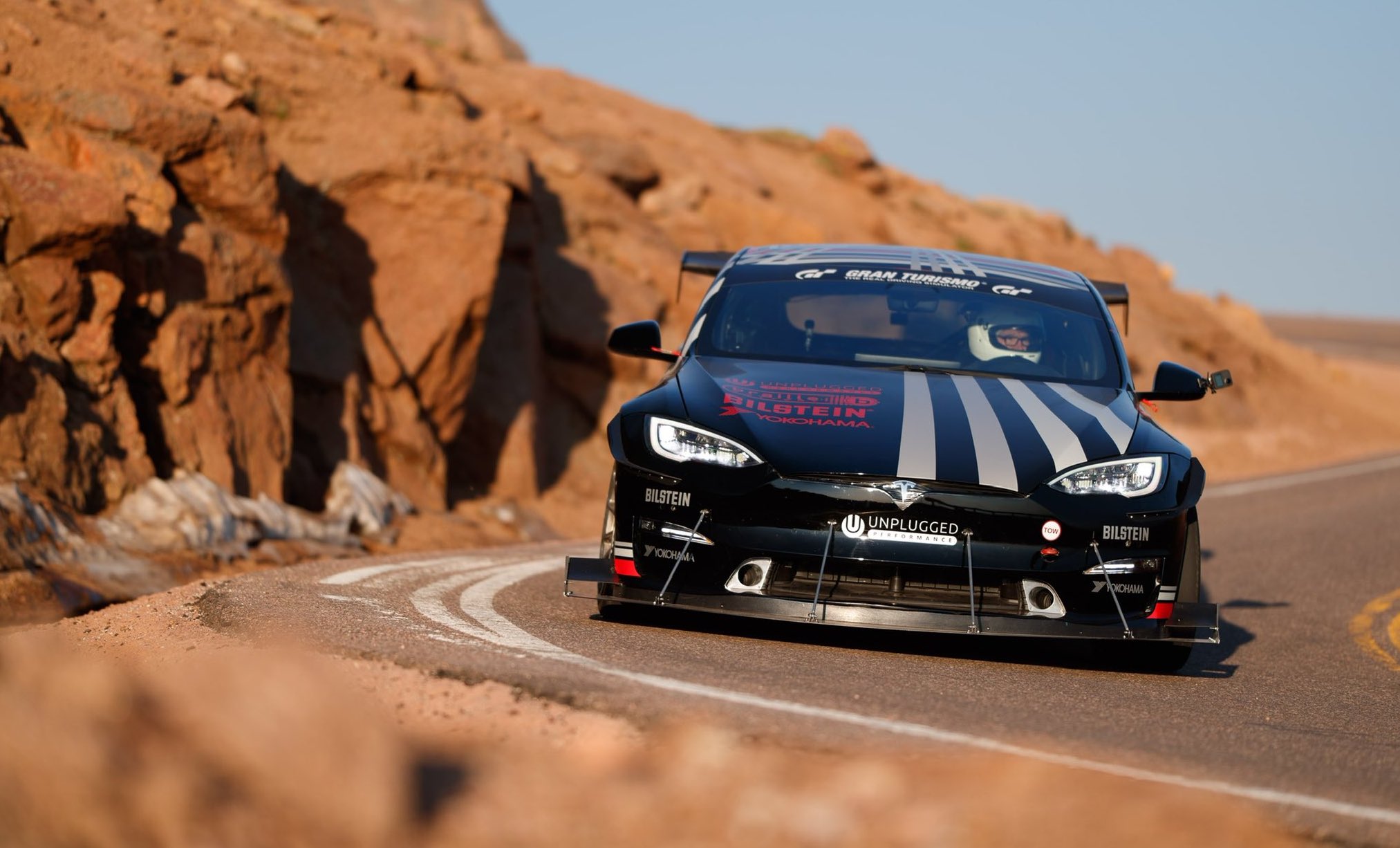 The excitement was palpable at the base of Pikes Peak as this year’s racecars lined up for their attempt at conquering the treacherous mountain. The mountain already won a round this year, as its weather conditions forced the Pikes Peak committee to shorten the course. Yet as legendary racecar driver Randy Pobst lined up his black Tesla Model S Plaid on the starting line, the atmosphere seemed electric.

The Tesla Model S Plaid racecar with parts from tuning house Unplugged Performance had been baring its fangs at Pikes Peak all week. Fresh off its dramatic comeback story last year with their Model 3 Performance racecar, Pobst and the Unplugged team were looking to complete some unfinished business. Last year’s Model 3 Performance, after all, finished the Pikes Peak Hill Climb after a heroic effort to rebuild the car following a major crash, but thermal issues prohibited the vehicle from completing the run at full power.

We’ve made a short film of Dark Helmet and our ICE melting pilot @RandyPobst. The film just had a 4:20AM debut on YouTube and covers our testing this week leading up to this very moment.https://t.co/89dHgRgjMg pic.twitter.com/CZqj3Ozl69

Pobst and the Unplugged Performance team came back to Pikes Peak this year with a vengeance. Armed with Tesla’s most powerful production car to date and some of the tuning house’s premier upgrades, the team proved to be a force to be reckoned with, effectively dominating its peers at the Exhibition Class in practice runs. Perhaps this was the reason why the Model S Plaid was loudly cheered as it prepared to begin its ascent. The cheers only got louder as the black Tesla launched at full power from the starting line.

Prior to the Model S Plaid, the Exhibition Class had been dominated by Nick Robinson in his 2017 Acura NSX, which completed the run in 7:14.704 on the shortened track. This was very impressive especially considering that immediately following it was another NSX, which finished its run in 7:53.615, about 40 seconds slower. A 2021 Model 3 driven by Joshua Allan completed the shortened course in a respectable 8:16.778 while another Model 3 driven by Dai Yoshihara encountered issues and finished its run in 11:41.162.

6:57.2 for the win at @PPIHC@Tesla Plaid Alien Technology has been weaponized by UP!
Thanks to the Tesla community for your support! Thanks to our hero @RandyPobst and thanks to our sponsors @bilsteinUS @YokohamaTC @BrailleBattery
The ICE age is over. pic.twitter.com/vekjqusm3V

At some point, it seemed like Robinson and his NSX were all but certain to win this year’s Exhibition Class, but there was one more car waiting for its turn — the Model S Plaid. Accelerating at incredible speeds right out of the gate, Randy Pobst furiously attacked Pikes Peak with his Tesla, putting on a masterclass in driving. It did not take long before the Model S Plaid took the shortened course’s final corner, crossing the finish line in defining fashion. It’s time on the shortened Pikes Peak course was 6:57.220, effectively dethroning Robinson’s Acura NSX from the Exhibition Class’ summit.

.@RandyPobst’s thoughts getting out of the @UnpluggedTesla #ModelS #Plaid at the top of #PikesPeak after his run #PPIHC2021 #PPIHC pic.twitter.com/TcPDNE0o3N

Speaking to Out of Spec Studios after his run, Randy Pobst was ecstatic. The legendary racer noted that the car was phenomenal, giving a good run up the mountain. “It was a good run. We ran good. Loads of power, took everything the Yokohama slicks had to offer, let me tell you. We have done a little sway bar change to try and balance it better. I’m really glad we did. The brakes held up, the suspension was fantastic,” Pobst said, raising his fist after seeing his results. From the base of the mountain, it was cheers and hugs among the Unplugged Performance team and the Tesla enthusiasts who came in support of the effort.

In a later tweet, Unplugged Performance noted that while a more thorough data analysis would certainly come later, the fact that the Model S Plaid completed the shortened course in 6:57.220 suggests that it may have been able to finish the full run up Pikes Peak in about 9:20. That’s an impressive time overall, and one that is already competitive with some of the most insane, bespoke vehicles that tackle the mountain every year. For now, however, Randy Pobst and the Unplugged Performance team, together with the group of Tesla volunteers that supported this year’s Pikes Peak attempt, could breathe for a bit knowing that the Model S Plaid does have what it takes to compete and dominate in one of the most dangerous racing events in the motorsport world.