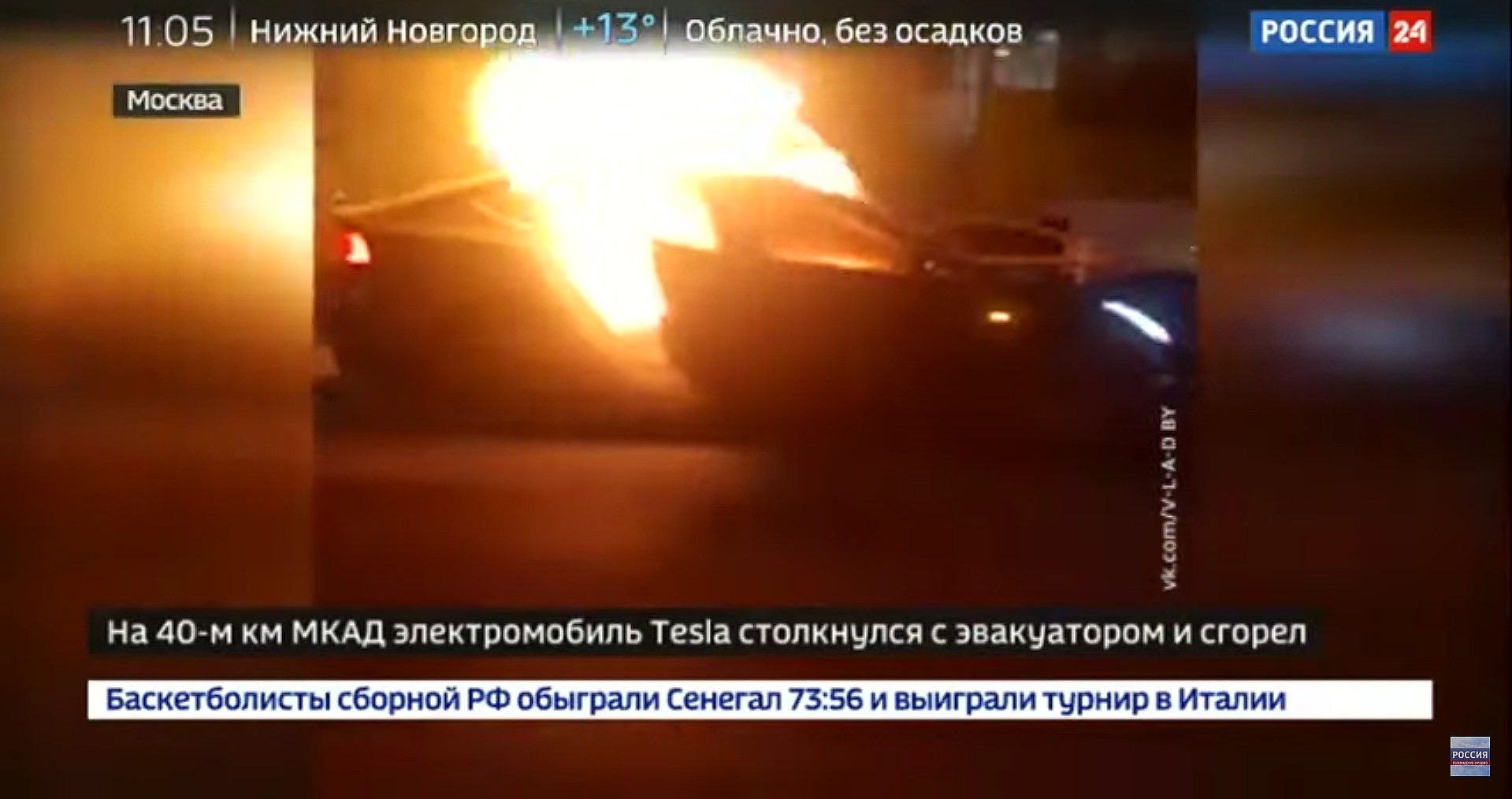 Tesla Model 3 fire in Moscow: What we know so far

This past Saturday, news broke about a Tesla crashing into a parked tow truck and bursting into flames on a motorway in Moscow, Russia. Particularly notable about the incident was that after the initial crash, explosions racked the already burning electric car.

A number of developments have emerged about the story so far, which clarified initial misconceptions about the incident, from the make of the vehicle to the injuries incurred by its occupants.  With this in mind, Teslarati has compiled this quick guide about what is currently known about this crash and its ensuing fiery aftermath.

A video of the accident taken from what appears to be a security camera showed the electric sedan passing a first stopped vehicle that had broken down and catching the corner of a tow truck that was sticking out into the adjacent lane. In a statement to CrimeRussia, Aleksey Tretyakov, the vehicle’s owner, noted that he had been traveling at 100 km/h, the speed limit in the area. The impact from the collision was enough to push the tow truck forward into the central dividing wall.

A video of the exact moment the Tesla crashed into the tow truck could be viewed below.

The make of the car

Initial reports that emerged following the accident tagged the Tesla as a Model S. With more videos of the crash’s aftermath emerging online, it now appears that the electric car involved in the accident was a Model 3, at least based on the shape of the vehicle’s taillights and headlights.

Videos of the Tesla on fire and the explosions that followed emerged on the heels of the accident. These clips, which were separate from the footage of the electric car crashing into the parked tow truck, showed a vehicle that was already ablaze. Two explosions could be seen in the videos, which resulted in parts of the electric car flying to the air.

Quite interestingly, the explosion within the vehicle seemed to have happened after the tow truck that the Tesla crashed into had been moved (the heavy vehicle does not seem to be in the vicinity when the explosions happened). As observed by Tesla Motors Club member KarenRei, the nature of the explosion in the Model 3 looked notably similar to an explosion that happens when an airbag explodes. A video of such an incident could be viewed here.

Initial reports of the injuries that resulted from the accident pointed to the driver of the Tesla and his two children being severely injured. Russian media outlet IXBT.com, for one, noted that Tretyakov was in “intensive care” due to the crash. Later reports would prove this to be false. Speaking with CrimeRussia, the Tesla owner noted that both of his legs were broken due to the accident, but his two children were “practically not injured.”

Update: While CrimeRussia noted in its coverage of the incident that the Model 3 driver had two broken legs as a result of the crash, it appears that the news agency misquoted the Tesla owner’s statements. Vladimir Grinshpun, a native Russian speaker, noted in a message to Teslarati that the Tesla owner clearly stated during a video interview with the news agency that he had one broken leg and a broken nose due to the accident. A video of this interview could be accessed here.

A video depicting what appeared to be Tretyakov hobbling away from his vehicle as his two children walked ahead of him has also been aired on Russian media outlet Russia 24.

Being a Tesla crash, it was not surprising to note that several reports promptly related the crash to the potential use of Autopilot. Discussing the incident, longtime TMC member mongo noted that since Teslas in Russia are imported through a third party, there was likely no Navigate on Autopilot support in the area. Thus, functions of Autopilot would likely be limited to basic features such as lane-keeping.

This was mentioned by Tretyakov himself, who noted that he was using a “driver-assist” feature and a “trimmed” version of Autopilot when the accident happened. The Tesla owner added that he was holding the wheel in the moments leading up to the crash, though he also admitted that he did not notice the parked tow truck on the road. Based on the video of the Tesla’s crash, it appears that either the vehicle or Tretyakov engaged the brakes just before the car hit the parked truck.

Tesla is yet to issue a formal statement about the incident, though the electric car maker has recently published its most recent vehicle accident and fire data. Tesla notes that from 2012 – 2018, “there has been approximately one Tesla vehicle fire for every 170 million miles traveled. By comparison, data from the National Fire Protection Association (NFPA) and U.S. Department of Transportation shows that in the United States there is a vehicle fire for every 19 million miles traveled.” It should be noted that Tesla’s data set includes instances of vehicle fires caused by structure fires, arson, and other things unrelated to the vehicle, which account for about 15% of Tesla vehicle fires over this time period.

Tesla Model 3 fire in Moscow: What we know so far