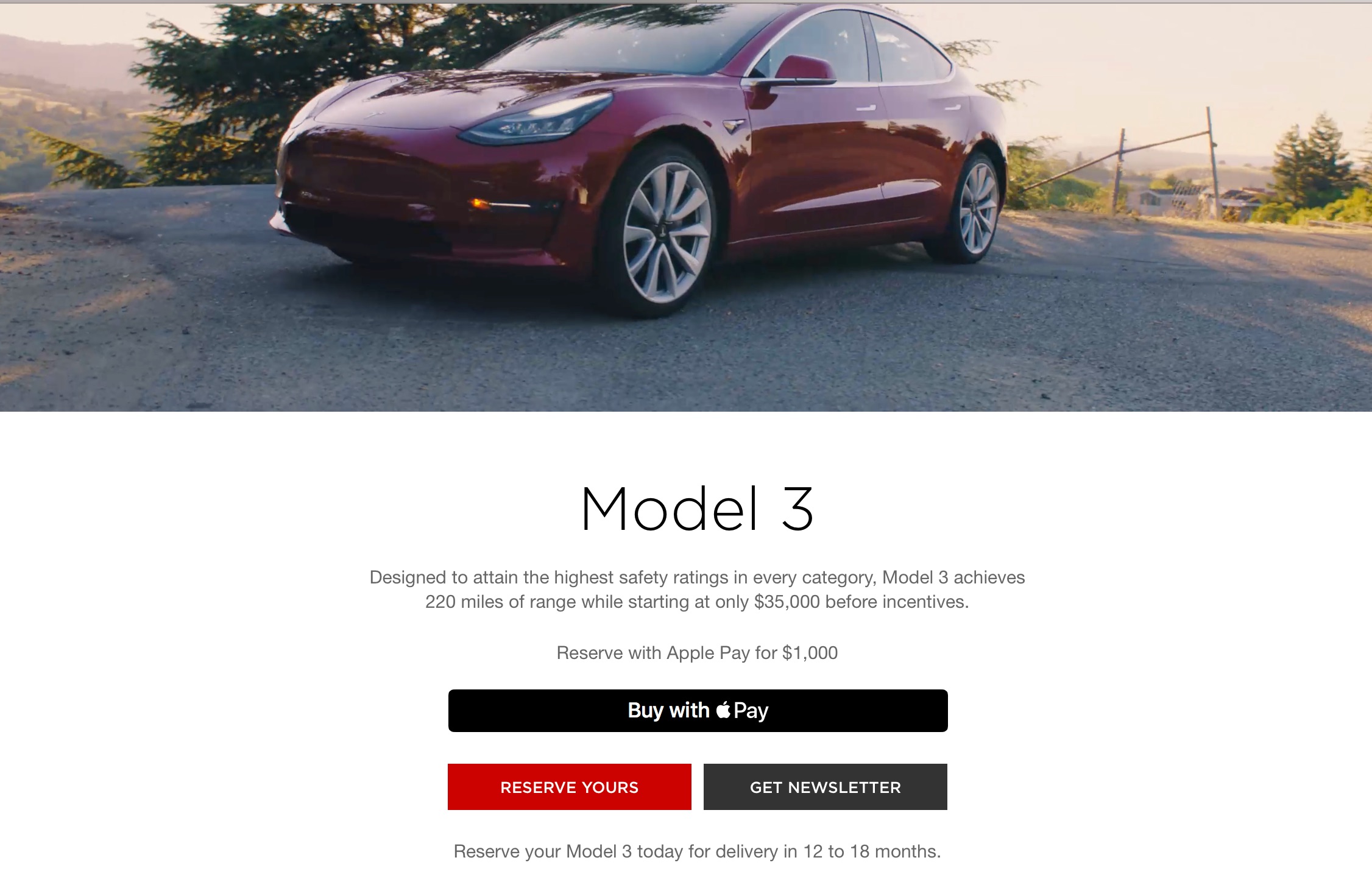 Would-be Tesla owners can now use Apple Pay to reserve or place a downpayment on their vehicles. The new mobile payment option allows prospective Model 3 buyers to place a reservation through an iOS or Mac device. Model S and X buyers could also place their down payments for the luxury sedan and SUV through Apple’s payment platform.

With Apple Pay compatibility, reserving or placing a down payment for Tesla vehicles is a lot easier. After all, mobile payments, while still linked to a card, forego several steps of the conventional purchase process, with transactions being completed through the iPhone, iPad or Apple Watch’s near field communication (NFC) capabilities. The new payment option is also offered to Mac users who are processing a transaction on Tesla’s website through Apple’s Safari browser.

The introduction of Apple Pay to Tesla’s payment options would likely not generate much revenue for the iPhone-maker, considering that the company only earns a fraction from each transaction, as noted in an Apple Insider report. If any, the mobile payment system simply appears to be Apple and Tesla’s way of making it more convenient to acquire a car — a concept that is practically unheard of in the automotive industry.

Considering that its supporters hail mobile payments as the future of commerce, Tesla’s adoption of the technology is yet another sign that the company is willing to take a step away from convention and embrace a system that, just like the electric car industry, is still in the process of emerging.

If any, Tesla’s introduction of Apple Pay to its payment options is just in time for what could very well be a spike in the adoption of the technology. According to an Inc. report, the use of mobile payment platforms such as Apple Pay has been steadily on the rise over the years, with mobile users utilizing the system for transactions ranging from online shopping to food delivery.

China, which is one of the world’s biggest markets for electric cars, is a country that has gone all-in on the adoption of mobile payments, with the nation saturated by services such as Alipay and WeChat Pay.

If any, Tesla’s adoption of Apple Pay seems to be almost poetic for the Elon Musk-led firm. Musk, after all, made a huge part of his initial fortune from the sale of PayPal, which he helped develop during his early years in Silicon Valley. PayPal, together with Musk’s own X.com, were pioneers in internet banking, with both platforms using the best of the day’s technology to conduct financial transactions in a fast, secure manner. Mobile payments like Apple Pay are like the spiritual successors to PayPal and X.com; thus, it’s just right that Tesla is supporting the emerging payment system.

As we noted in a previous report, reservations for the Model 3 continue to grow by the day, with Tesla stating that it gets roughly 1,800 new reservations daily. Tesla also seems to be preparing to introduce the AWD variant of the Model 3, considering that a unit with a VIN number referencing two drivetrains was spotted in San Francisco, CA last month.