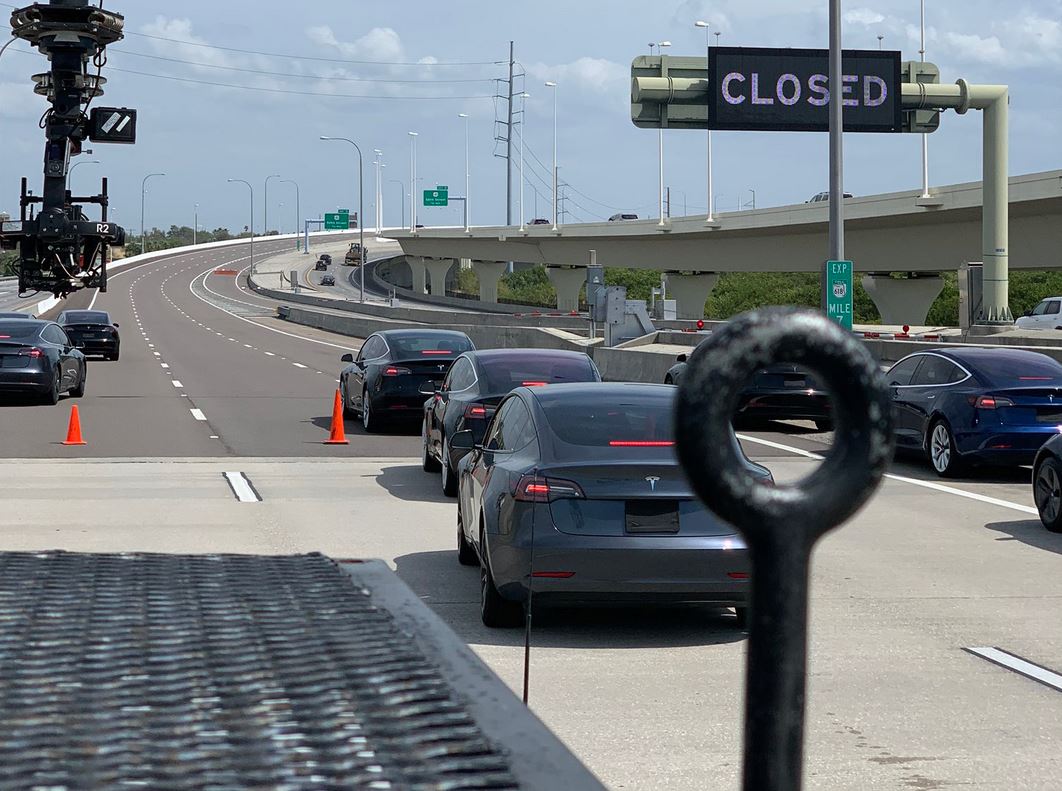 Tesla Model 3 owners participated in a filming of a documentary series about Tampa Bay, Florida that will reportedly be distributed on Netflix for Super Bowl 2021.

Tesla Model 3 owner and Redditor blainestang volunteered for the project and shared his experience about filming on a closed and empty Lee Roy Selmon Expressway on Tuesday.

“There were 9 Model 3s there for a 3×3 caravan of ‘autonomous’ Model 3s. It was filmed by drone and camera truck with boom camera. Officially, the shoot was for an upcoming documentary about the future of transportation in Tampa. Unofficially, it seems like a pretty big production for that, but maybe these guys just go big, and it was fun to be a part of,” blainestang wrote.

According to blainestang, it is not clear if Tesla was involved in the project but the participants were volunteers purportedly members of the Facebook group Tampa Bay Tesla Club, on which the production company posted to call for participants.

“Hi Tampa Bay Tesla owners, Diamond View is looking for Tesla Model 3 owners that are interested in participating in an upcoming documentary on the future of transportation. We are seeking participants in the Tampa Bay area who are available on Tuesday March 3rd from 11am – 1pm,” the production company wrote.

Film Tampa Bay, a digital media commission that markets the Tampa Bay region as a premier filming destination, also posted about the filming on the major thoroughfare.

Earlier today @Diamond_View filmed a commercial using the Lee Roy Selmon Expressway downtown. The ᴇɴᴛɪʀᴇ highway 👀 Thank you for inviting us and the @TampaEDC to the set 🎥🚗 #filmtampabay pic.twitter.com/ltI5IZ26Fe

In an interview back in 2018, Diamond View Studios CEO Tim Moore shared some details about the project. The said documentary is a three- to five-year passion project called “Building Tampa” that covers politics, new developments, arts, culture, and more.

“We are at the inflection point of a city that is about to be reborn. My thought was, instead of waiting until that point and being reactive, doing interviews about what had happened. We’re getting the inside scoop on this now,” Moore said.

The said docuseries will feature 45-minute episodes that will put the spotlight on Tampa, which will host Super Bowl LV on Feb. 7, 2021 at the James Stadium.

Tampa was listed in 2018 as one of the smart cities to watch by technology site StateScoop. The city received a grant of $21 million from the Department of Transportation for a pilot project that seeks to launch a fleet of connected cars for 1,600 residents. Back in 2017, the Tampa-Hillsborough Expressway Authority (THEA) also closed a section of the Lee Roy Selmon Expressway’s Reversible Express Lanes to do test rides in vehicles that communicate with other vehicles and other infrastructure nearby using a wireless technology called Dedicated Short Range Communications that work similarly to Wi-Fi.