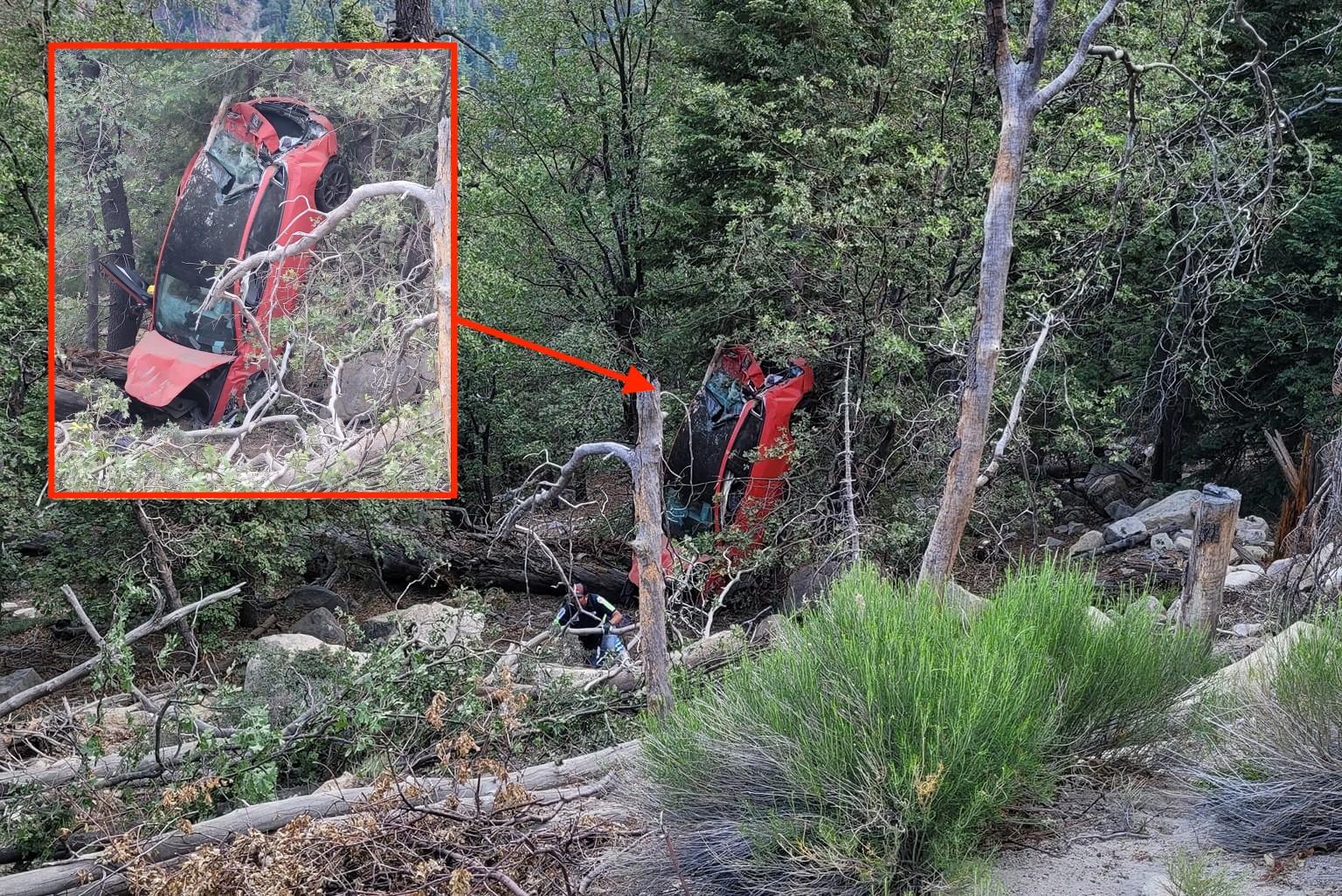 There are a few times when one could truly appreciate the 5-Star Safety Ratings of cars like the Tesla Model 3. Engineered to be the safest vehicle in its class, the Model 3 has proven over the years that it has the capability to protect its occupants, even in situations that may seem dire. An example of such an event was reported recently in Southern California.

As shared by Mountain Reporter on its Facebook page, a Tesla Model 3 was involved in a severe accident while driving along Highway 18 between Snow Valley and Big Bear Dam. Based on initial impressions from responders and investigators who later arrived at the scene, it appeared that the Model 3’s driver lost control, resulting in the Tesla falling off the side of the mountain.

The Model 3 fell about 100 feet before coming to rest vertically in a heavily wooded area. Images from the news outlet showed that the vehicle sustained heavy damage from the incident, with the Model 3’s front and rear being effectively totaled. Yet despite these damages, the Model 3’s cabin remained relatively intact. This suggested that the vehicle was able to protect its occupants in its final moments.

And sure enough, that’s exactly what the Model 3 did. All four occupants of the Model 3 were reportedly able to vacate the totaled vehicle without any help. The Model 3’s occupants were later transported to a nearby medical facility with only minor to moderate injuries. Considering that the Model 3 effectively fell the equivalent of a nine-story building before coming to rest, such results are very impressive and indicative of just how safe Teslas really are.

The Tesla Model 3 may look like a sleek, futuristic vehicle, but it is also a tank in terms of its durability. Over the years, the Model 3 has effectively proven its mettle when it comes to its capability to protect its occupants. This was demonstrated this past May in England when a Model 3 driven by a husband and wife were involved in a horrifying incident that saw a pallet of concrete blocks falling off a semitrailer and crashing into the electric vehicle.

Despite the severe damage to the car, the couple in the Model 3 was able to walk away from the crash with just minor cuts and bruises, much to the relief of the truck driver, who was reportedly horrified as he thought he had killed the Tesla’s occupants. “I think the lorry driver was sure he had killed us because he was as white as a sheet. He asked if I was OK and I shared a few choice words with him,” the Model 3 driver said.