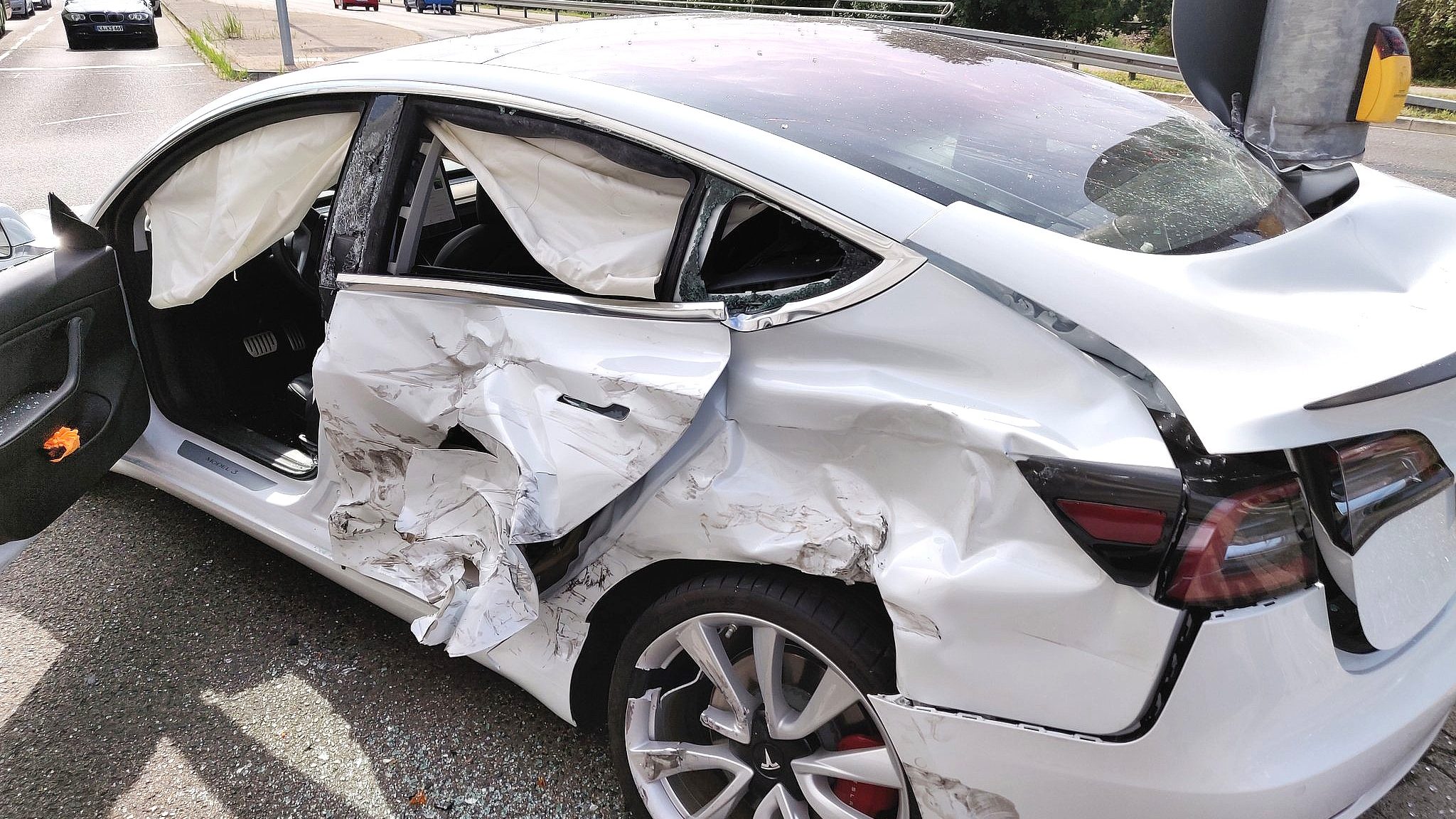 A Tesla Model 3 owner recently walked away from a frightening accident in Germany, and he credits his Tesla Model 3 Performance‘s 5-star Safety Rating for helping him escape the incident with only minor injuries.

Tobias Frey, a 33-year old German resident, was driving on Motorway A5 in Karlsruhe, Germany when suddenly, a 16,500-lb truck approached the left side of his Model 3 Performance and slammed into the rear door at near highway speed. The violence of the collision slammed Frey’s car up against a traffic light.

Luckily, Frey was alone in the car and despite the gravity of the accident, he sustained only minor injuries. “I have issues with my neck, some little cuts on my shoulder from the broken glass, some bruises at the neck, belly, backbone and my knee,” he said in a message to Teslarati.

Thanks @elonmusk and @Tesla for builing such a strong car. A 7500 kg Truck crashed with 60 km/h in my side. He ignored a red light pic.twitter.com/7nXMGFaL5u

Instead of putting a harsh message on social media, Frey took to Twitter to thank Tesla and its CEO Elon Musk. “Thanks Elon Musk and Tesla for building such a strong car,” Frey said.

Along with the words of appreciation to the Silicon Valley-based car manufacturer and its CEO, Frey uploaded four photos and dashcam footage, showing the crash between the two vehicles. “The airbags did a very good job,” Frey said, “and I am happy it didn’t catch fire, because of the strong architecture from the car”. Frey added that Tesla called him and left a message to see how he was feeling.

With Frey being able to leave the accident with only scrapes and bruises, Tesla has put their money where their mouth is by proving, once again, that their vehicles live up to their high crash-test rating. Although Tesla vehicles didn’t crash enough to make it onto a Swedish insurance firm’s “Safest Car List,” the recent crash does indicate once more that the electric car maker’s vehicles are built with safety in mind.

Frey added that he will definitely be buying a new car after this accident. When asked what his choice will be, he replied, “Again a Model 3 Performance.”

Thanks to their all-electric construction, Tesla’s electric vehicles are capable of weathering high-speed crashes that would potentially be fatal in other vehicles. An example of this happened earlier this year when a Tesla Model S was involved in a violent collision with a runaway car at the tunnels of Vallvidrera in Barcelona, Spain. A surveillance video of the incident showed the Model S absorbing the impact of the massive crash, which caused the other vehicle to bounce off against the adjacent lane’s wall. Just seconds after the impact, the Model S driver could be seen exiting the all-electric sedan, dazed but otherwise unharmed.