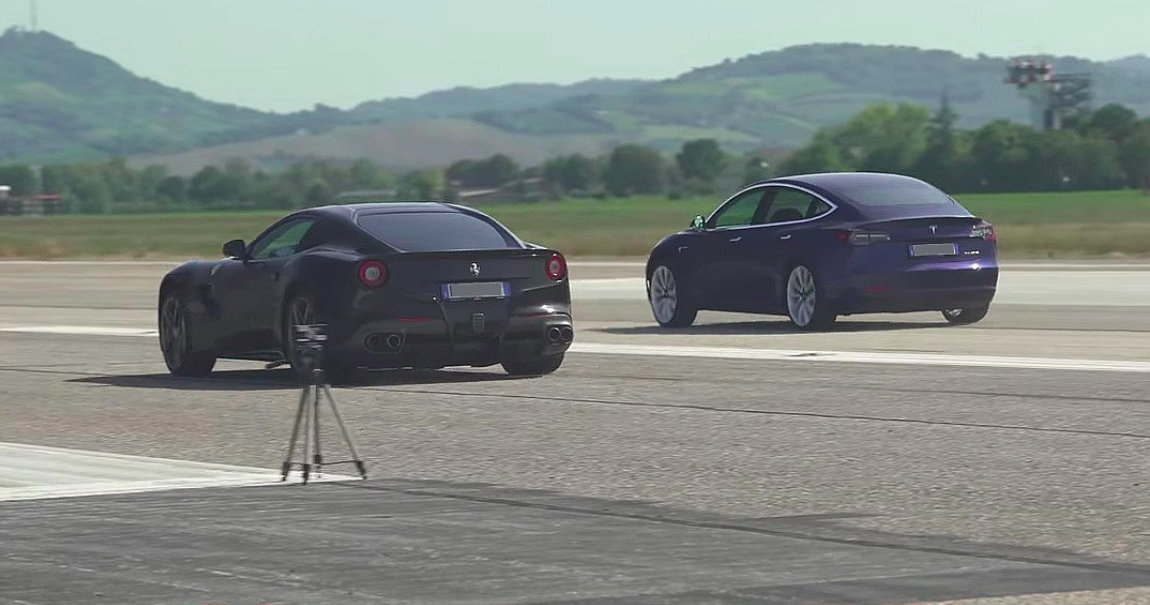 Several Tesla electric cars recently hit an airport landing strip in Italy to compete against a Ferrari F12 Berlinetta, and the results proved that even the Silicon Valley-based automaker’s most conservative Performance-branded vehicle is no joke when it comes to drag races.

A Performance variant of the Tesla Model 3 challenged the Ferrari on both a 200m (1/8 mile) and 400m (1/4 mile) race in a video uploaded to YouTube by auto enthusiast Matteo Valenza. The Ferrari F12berlinetta packs a 731 horsepower 6.3 L V12 engine with rear-wheel-drive that is capable of hitting a top speed of 211 mph. The car features a quick 0-62 MPH time of 3.1 seconds, though it boasts a base price of $400,000, well into the supercar price range.

The advantage of electric vehicles in a drag race comes from the electric motor’s ability to produce instant torque. Electric cars do not have a transmission, so there is no delay in the time that torque takes to travel to the wheels of the vehicle. This concept has been proven many times, and Tesla vehicles, especially when sporting a Performance variant, are heavily favored against any vehicle that uses an internal combustion engine.

But the most impressive statistic about the whole test was the fact that the Ferrari was outperformed by the Model 3 Performance on both tests, even though the vehicle, essentially a very quick family sedan, was able to beat an actual supercar on a drag strip. If someone was looking to have a Tesla that could dominate supercars on the quarter miles, after all, they would more than likely be interested in a Model S Performance instead, which has a 0-60 mph time of less than 2.5 seconds.

Perhaps what is more impressive are the results of the 400m race, where the Model 3 Performance surprised the channel’s host registering a 0:10.58 time. This was .39 seconds quicker than the Ferrari F12 Berlinetta, whose time was 0:10.97.

That being said, the quickest time of the day was recorded during a 200m test by a Tesla Model S P100D. The lightning-quick large sedan crossed the 200m mark with an impressive 0:06.38 seconds, nearly eight-tenths of a second faster than the Ferrari F12.

Watch Matteo Valenza’s day of drag races with the Tesla Model 3 Performance below: