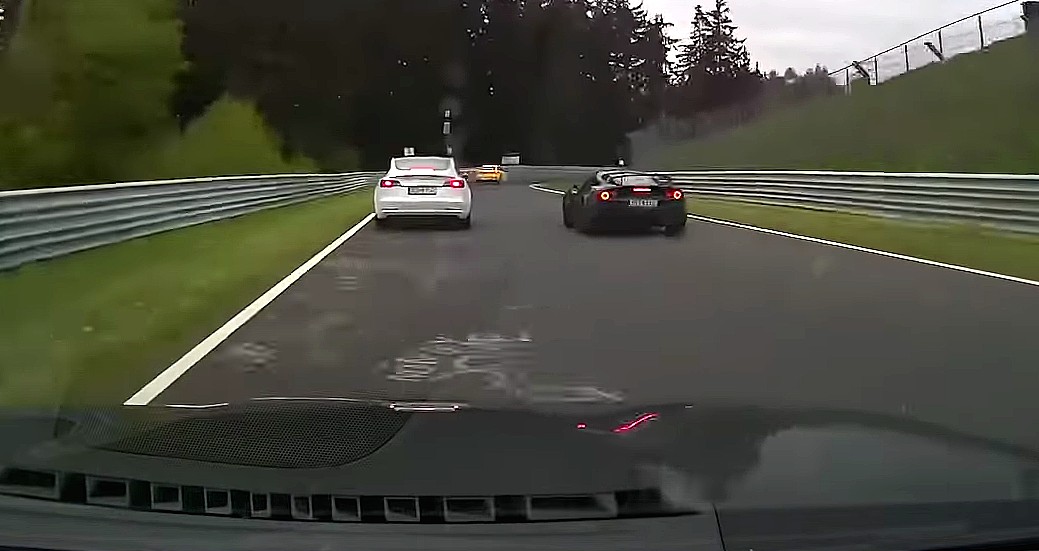 A Tesla Model 3 Performance with Track Mode recently took on what could very well be the world’s most iconic track: the Nurburgring. During the duration of the run, which was filmed from an accompanying BMW M2 Competition, the Model 3 Performance showed off its acceleration chops, overtaking several vehicles as it ripped through the track.

Footage of the Silicon Valley-made electric sedan and the German-made high-performance car was shared on YouTube by Marcel D., who owns the Model 3. The Model 3 was just delivered recently, and it was completely stock when its owner took it to the track. Despite this, the vehicle took on the twists and turns of the Nurburgring fairly well, at times even accelerating away from its M2 companion.

The Model 3 owner noted that his vehicle consumed about 100-120 km (about 60-74 miles) of range per lap. Despite the high power consumption of the vehicle, the Model 3 did not exhibit any performance throttling during its track session. The Model 3 was carrying three passengers during the run too, but it still handled very well, moving like it was on rails when it took on the tricky sections of the track.

The nature of the video, as well as the presence of the BMW M2 behind the Model 3 Performance, has resulted in some misconceptions about the two vehicles’ track session. A look at social media posts about the video shows electric car skeptics criticizing the Model 3 for being unable to shake off the BMW M2. Some internal combustion engine fans also hailed the Bavarian performance car for allegedly toying with the electric sedan. These assumptions are inaccurate.

It should be noted that the two vehicles were in no way competing against each other, considering that the people in the two cars were friends who simply wanted to test out the Model 3’s track capabilities. In this light, the Tesla definitely did not disappoint, and it all but showed that the track times of professional racecar driver Randy Pobst (who tuned Track Mode with Tesla) around the “Streets” of Willow Springs International Raceway in CA were no fluke. Pobst’s track times with the Model 3 Performance made headlines after it beat the Alfa Romeo Giulia Quadrifoglio and the 2011 Ferrari 458 Italia during a closed circuit test late last November.

The Tesla Model 3 is among the vehicles currently breaking the mold and conventional assumptions that people have over the alleged limitations of electric cars. While even the best premium EVs on the market such as the Model S P100D tend to throttle their power when driven around a track, the Model 3 Performance is actually capable of maintaining its optimum performance during extended hard driving sessions. So impressive was the Model 3 that noted auto publication Top Gear recently declared the electric vehicle superior to one of the best high-performance sedans in the industry, the BMW M3.

Watch the Tesla Model 3 take on the Nurburgring in the video below.