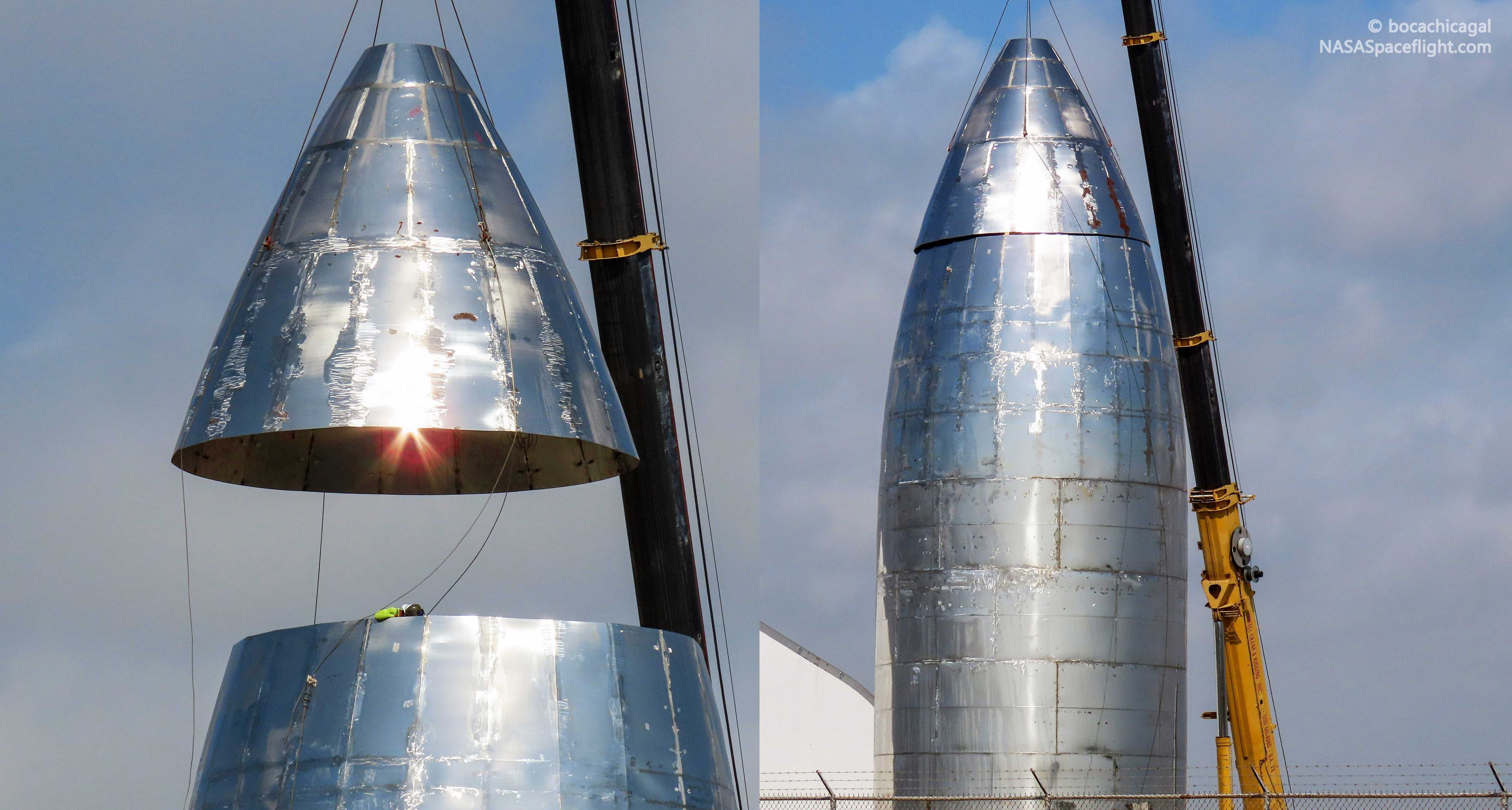 SpaceX's Texas orbital Starship prototype was capped with its nosecone on May 20th. (NASASpaceflight - bocachicagal)

On May 20th, SpaceX technicians successfully stacked a nosecone on top of the company’s Boca Chica orbital Starship prototype. Simultaneously, a separate team of technicians and engineers have been hard at work building a second similar-but-different Starship prototype near Cape Canaveral, Florida.

Officially confirmed last week by Elon Musk, the SpaceX CEO revealed that the company was not only building two orbital Starship prototypes simultaneously – not news in itself – but that those prototypes were being built as a sort of internal competition between different teams and ideas. The competition is not cutthroat – knowledge is shared between Texas and Florida – but the strategy is fairly similar. In lieu of actual commercial competitors, SpaceX is attempting to compete with itself to more rapidly and effectively develop a brand new launch vehicle – the stainless steel Starship/Super Heavy.

A Starship rises in the East

In just the last week, both SpaceX groups have made major progress. On the East Coast, the general public saw the first photo of SpaceX’s Florida Starship build precisely seven days ago. It appears that SpaceX has more or less taken over a Cocoa, Florida facility known to be the prior home of Coastal Steel, a repeat NASA contractor known for steelwork.

It’s unclear if SpaceX has fully acquired Coastal Steel or is simply partnering with the small company in the early stages of its Florida Starship buildup. Regardless, even from perspectives quite a bit more distant than those available in Texas, it’s clear that the metal workmanship is at least on par with Boca Chica, if not giving them a run for their money.

Admittedly, the playing field is not exactly level. SpaceX’s South Texas team has been working just a few thousand feet away from the unobstructed Gulf of Mexico in conditions that would make for an excellent traditional-aerospace horror show. Aside from a lone tent, all welding, assembly, integration, and testing has been done while fully exposed to the elements. SpaceX’s Florida team appears to have the luxury of an established warehouse – previously used for steelwork – to use as a covered and partially insulated work and staging area. The Florida team effectively had everything they needed (give or take) on hand from the moment work began, while Texas had to quite literally build all of its facilities from nothing.

Be it the facility luxuries or Cape Canaveral’s far larger pool of local aerospace talent, it’s clear that SpaceX’s Florida team will be a competitive force to be reckoned with despite Texas’ apparent head start. In the seven days since the first photos of the Florida Starship were published, SpaceX technicians have almost doubled the height of the largest welded section, raising it from ~5.5m to ~9m (18-30 ft).

Meanwhile, those working inside the staging warehouse continue to crank out 2x9m subsections, already making way for what appears to be the first tapered nose section of the Florida Starship. At this rate, Florida could very well catch up to SpaceX’s Texas Starship just a month or two from now. It’s worth noting that the Florida team does not appear to be involved in any Starhopper activities. SpaceX Boca Chica, on the other hand, has spent a major portion of the last several months building out Starhopper and preparing the odd prototype for untethered hop tests.

Despite Starship Florida’s rapid progress, Starship Texas has not exactly been standing around. In the last week or so, SpaceX technicians and engineers have been simultaneously working on major new integration, assembly, and test campaigns with both Starhopper and the first orbital Starship prototype. A dedicated Starhopper article will come later this week as SpaceX’s South Texas team nears Raptor reinstallation and an untethered hop test campaign, scheduled to begin as early as the end of May.

On the orbital Starship side of things, Boca Chica took a major symbolic step towards aeroshell completion by capping off the upper half of the prototype with a stainless steel nose section. Altogether, the Starship assembly now stands about 25m (80 ft) tall from tip to tail, roughly 60% as tall as a Falcon 9 booster (first stage). With the installation of the craft’s nose, SpaceX has also implicitly confirmed that most – if not all – of the Starship prototype’s tankage still needs to be built, unless a great deal of hardware is hiding inside Boca Chica’s on-site tent.

What could either be the orbital Starship’s seven-Raptor engine section or the start of its liquid oxygen or methane tank is also being built a few hundred feet distant. That mystery segment was recently lifted onto a second concrete jig for easier access, while SpaceX has also been hard at work building a dedicated integration facility similar to the warehouse being used in Florida.

Altogether, SpaceX’s South Texas team appears to be 30-40% away from completing a Starship-sized steel aeroshell. A huge amount of work remains to be done on the inside of the theoretically orbit-capable vehicle, including propellant tanks, a thrust structure capable of supporting seven Raptor engines, landing legs/fins, and a jungle of plumbing and avionics installation. Still, the amount of progress already visible is undeniably impressive, made even more intriguing by the existence of a separate Starship build effort to the east.