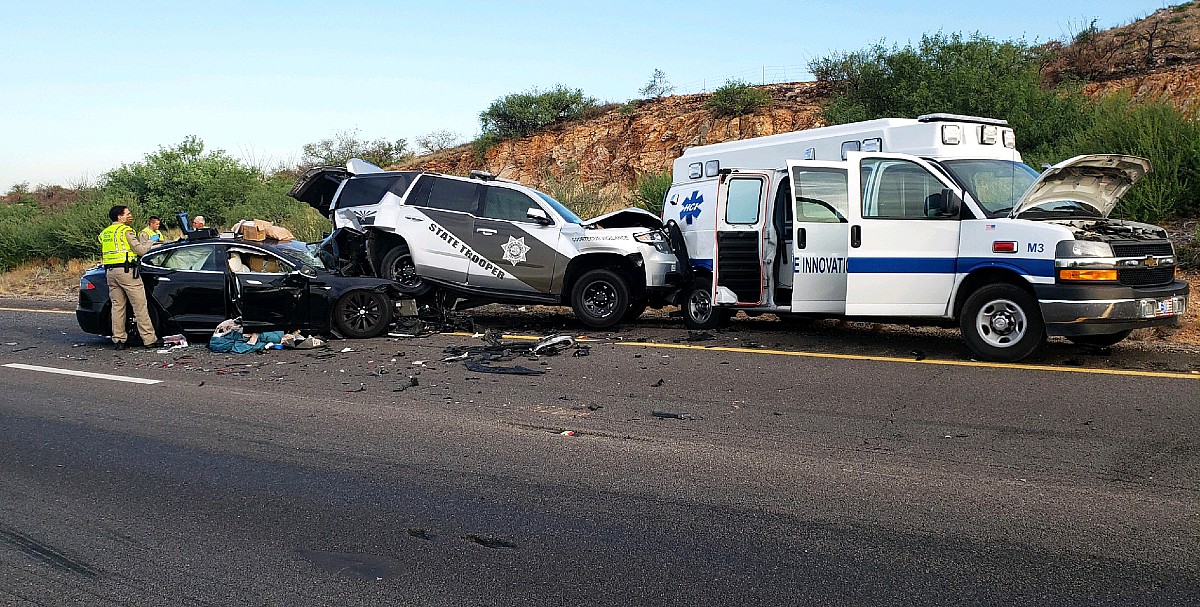 Tesla driver slams into State Police tending to another accident, DUI being investigated

The driver of a Tesla Model S crashed into the back of an Arizona State Trooper’s SUV on Tuesday after reportedly being under the influence. The driver told officers and deputies on the scene that he was using Tesla’s driving-assist Autopilot system.

The Trooper’s SUV then collided with an ambulance that was parked in front of the vehicle. The officer who was using the car was not in the vehicle at the time of the collision and was not injured.

The incident took place on Interstate 10 eastbound near Benson, Arizona, in the Southeastern portion of the state.

🚨 Reminder: Please #SlowDown & #MoveOver when you see flashing lights & vehicles stopped on the side of the road! Today, a Tesla rear-ended a patrol vehicle at the scene of an earlier crash on I-10 EB near Benson. Luckily, our sergeant wasn’t in the vehicle & wasn't hurt. (1/2) pic.twitter.com/WZhUQ10StL

The officer and ambulance involved in the crash were on the scene attending to victims from a previous collision, a member of the Arizona Department of Public Safety told Teslarati.

The driver of the Tesla seemingly did not move over to the right-hand lane when the SUV and Ambulance were parked on the left-hand shoulder.

In 2005, the State of Arizona passed the “Move Over” law, which required all drivers to shift lanes to protect police officers and emergency personnel from being subjected to vehicles passing at dangerous speeds.

At the current time, the driver of the Model S is in a Tucson, Arizona area hospital being treated for serious but non-life-threatening injuries. He has not been charged with anything at the current time, but is being investigated for Driving Under the Influence, an Arizona Department of Public Safety spokesperson said to Teslarati.

This is not the first time Tesla’s Autopilot has been under fire. In 2018, the National Highway Transportation Safety Administration (NHTSA) investigated an accident in Utah, where a driver who was using Autopilot in their Model S crashed into a parked firetruck at 60 MPH.

The driver walked away from the accident with a broken ankle, and NHTSA findings showed that she had not used Autopilot’s features responsibly. The steering wheel was unattended for 80 seconds, and the driver admitted to looking at her cell phone when the incident occurred.

Tesla maintains that using Autopilot still requires the attention of the driver at all times. Drivers are required to keep their hands on the steering wheel while using any of the company’s self-driving capabilities to ensure the safety of everyone on the road.

Autopilot has been blamed for accidents in the past. However, in many incidents, like the one in Utah, the company’s self-driving capability was vindicated based on NHTSA investigation findings. Tesla Autopilot remains one of the safest ways to navigate, as vehicles using the characteristic were involved in an accident once every 4.68 million miles driven, according to the company’s safety report. The national average is 479,000 miles.

Tesla driver slams into State Police tending to another accident, DUI being investigated