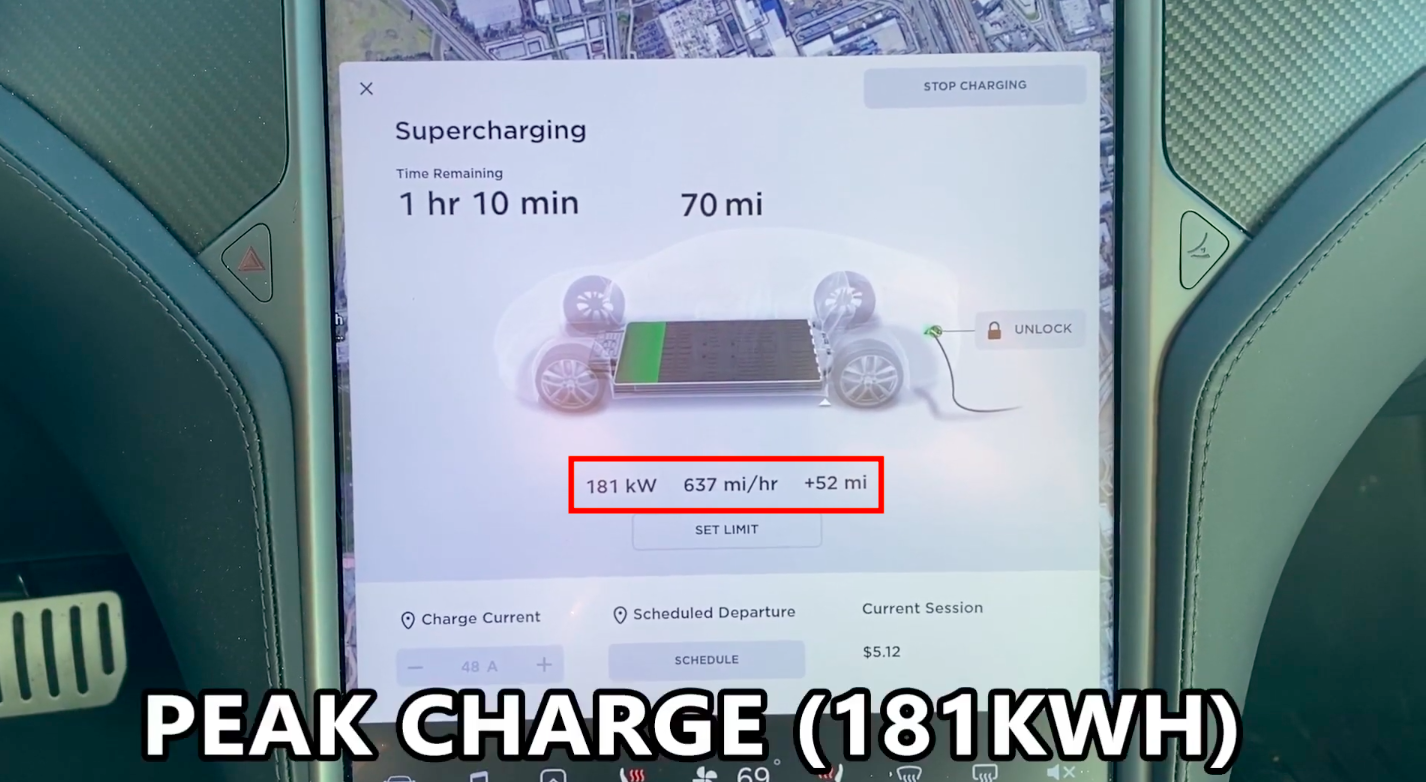 A Tesla Model S was recently able to hit a peak charging rate of 181 kW during a Supercharging session. While the flagship sedan’s peak charge rate is still a bit behind the Model 3’s peak charge rate of 250 kW on a V3 Supercharger, it is nevertheless impressive, highlighting the fact that Tesla’s vehicles are in a constant state of improvement.

Tesla owner-enthusiast Eli Burton of the My Tesla Adventure YouTube channel recently paid a visit to the Fremont factory on his Raven Model S Performance. The vehicle only had 5% of charge left on its 100 kWh battery pack, giving the flagship sedan the opportunity to experience a full charging session on one of the site’s V3 Superchargers.

Based on the Tesla enthusiast’s video, the Raven Model S Performance took some time before its charge rate started picking up. But once it did, it climbed far beyond the 150 kW peak charge rate of Tesla’s V2 Superchargers. The Model S’s charge rate ultimately topped out at 181 kW, a notable improvement over the speed of the company’s previous chargers.

Quite interestingly, this seems to be among the first accounts of a Model S charging close to the 200 kW peak V3 rate that Tesla announced for the vehicle. When the V3 network was launched last year, tests by Tesla owners such as Dan from the What’s Inside? YouTube channel revealed that a car like a Model X would only receive just around 124 kW from a V3 Supercharger.

Tesla has been rolling out improvements and optimizations to its vehicles and charging systems since then, of course, as evidenced by Burton’s recent charging experience. This ultimately bodes well for Tesla and its upcoming cars like the Model S and Model X Plaid, which are expected to be unveiled in the near future. Musk has previously stated that the Plaid Model S should be available later this year, and that vehicle will most definitely be optimized for V3 Supercharging like the Model 3.

Amidst the Model 3 ramp, older flagship vehicles like the Model S and Model X were a bit left out when it comes to their charging speed. Fortunately, Tesla’s constant refinements to its vehicles ensure that its cars actually become better over time. The Model S may not be able to tap into the V3 Superchargers’ peak output yet, but one can be sure that Tesla will do what it can to optimize the vehicle’s charging to such a degree that it can recharge its battery as fast as it can within the limits of its safety.

Watch the Model S Performance’s peak charging rate in the video below.