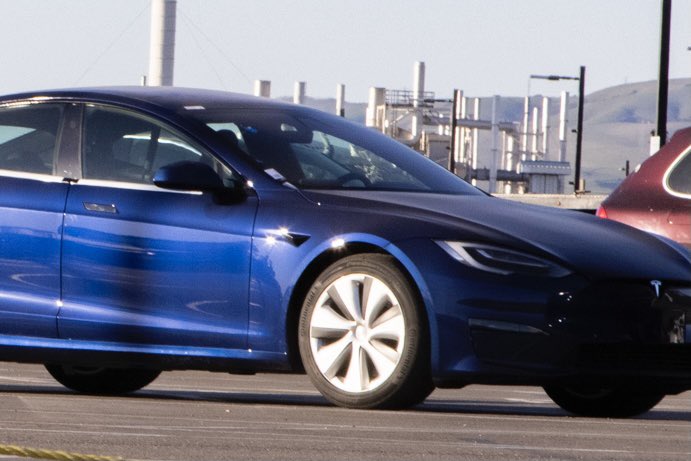 Tesla’s efforts to produce the Model S refresh seem to be making some headway, with recent videos of the Fremont Factory showing what could very well be the first production units of the all-electric flagship sedan. While Tesla’s deliveries for the Model S refresh are looking to be a bit later than Elon Musk’s February estimate, customer deliveries seem to be coming soon.

The new Model S refresh units were spotted during a recent visit to the Fremont Factory by electric vehicle advocates Ryan Levenson of The Kilowatts and Model 3 owner Arash Malek. During their short visit, the EV enthusiasts were able to observe a red Model S refresh being driven around the Fremont Factory area. Unlike the test vehicles that have been spotted in the wild recently, the Model S in question was fitted with some window trim wrap and bar code stickers, hinting that they are not intended for simple road tests.

Another Model S refresh was sighted alongside Tesla’s other vehicles in the Fremont Factory’s holding lots. While the car was a bit difficult to see amidst the sea of Model 3s in the area, several Model S refresh elements were visible in the car, such as its blacked-out trim and updated bumper design. Similar to the red unit spotted driving around the factory, the Model S refresh in the parking lot also had bar code stickers, a potential indicator that the vehicle is intended to be delivered to customers.

What is quite interesting is that so far, the two new Model S refresh sighted in Fremont were equipped with a round steering wheel. This is quite interesting considering that Elon Musk and Tesla have made it a point to emphasize that the Model S refresh would be fitted with a yoke steering system, a rather controversial set of steering controls that have so far been greenlighted in numerous European countries.

The Model S refresh sightings come at a time when rumors have emerged alleging that Tesla is running into some delays at the Fremont Factory due to a shortage of chips from Samsung, which supplies parts for the Full Self-Driving computer. Samsung’s operations in its Austin fabrication facility were disrupted last week due to the state’s widespread power outages. That being said, reports have also mentioned that Model 3 production is still at around 800 units per day, which should help keep the facility productive while it waits for the chip shortages to subside.

Elon Musk has noted that the Model S refresh will start customer deliveries in February. While accomplishing this target may seem unlikely considering that the month is almost at its end, the presence of what appear to be production Model S refresh vehicles in the Fremont Factory means that Tesla is indeed working on getting its revamped flagship sedan to customers as soon as possible.

Watch a video of a production Model S refresh on the road in the video below.