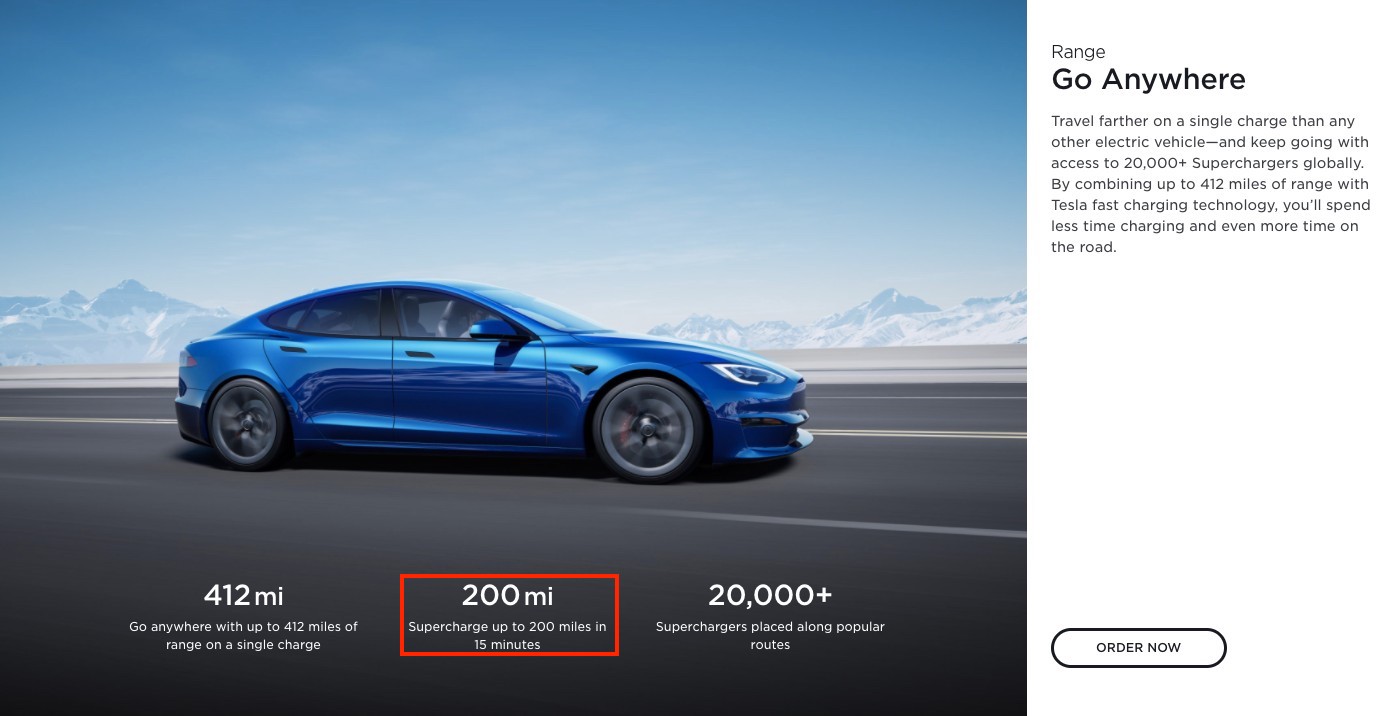 With the rollout of the Model S and Model X refresh, Tesla has brought its two flagship vehicles back into the front of the pack. This was especially true for the Model S, which now features a Plaid powertrain that allows it to achieve a 0-60 mph time of less than 2 seconds and a top speed of 200 mph. But this is not all—a look at the new Model S’ official webpage shows that the flagship sedan is now Tesla’s fastest charging vehicle as well.

Tesla’s page for the Model S notes reveals that the flagship sedan is capable of replenishing 200 miles of its range in 15 minutes. This effectively makes the Model S refresh about 12% faster than the Model 3, the fastest charging Tesla prior to the flagship sedan’s update. The Model X, for its part, now matches the Model 3’s Supercharging speed, with Tesla noting that the SUV could now recharge 175 miles of its range in 15 minutes.

Tesla did not specify the chargers that would enable the Model S and Model X refresh’s updated maximum recharge speed, though their impressive charging rates would likely rely on the electric car maker’s 250 kW Supercharger V3 network, which is currently being ramped. Prior to their refresh, the Model S and Model X were unable to take advantage of the V3 Superchargers’ full 250 kW output. With the refresh, this no longer seems to be the case.

What’s particularly impressive is that Tesla was able to achieve the Model S’ upgraded charging rate despite the vehicle still using the 18650 battery cell form factor, which has been in use since the days of the original Tesla Roadster. Elon Musk explained this during the Q4 FY 2020 earnings call when he explained that Tesla’s newest vehicles do not necessarily require the company’s larger, custom 4680 cells, to achieve optimum performance.

“We are talking with them about making the 4680 form factor, but they — it is not required. For example, the new S currently uses the 18650 form factor. So they’re just a more advanced cell, and we think we’ll continue to use that form factor for at least a few years. But we will, over time, be retiring the form factors and try to move to a consistent form factor.

“But it is not a requirement that we place on our suppliers, because they would — it would just result in fewer cells. So it’s better for us to deal with the complexity of different cell form factors than insist on a single form factor for our suppliers today. Like I said, over time, it will make sense to have a consistent form factor,” Musk noted.