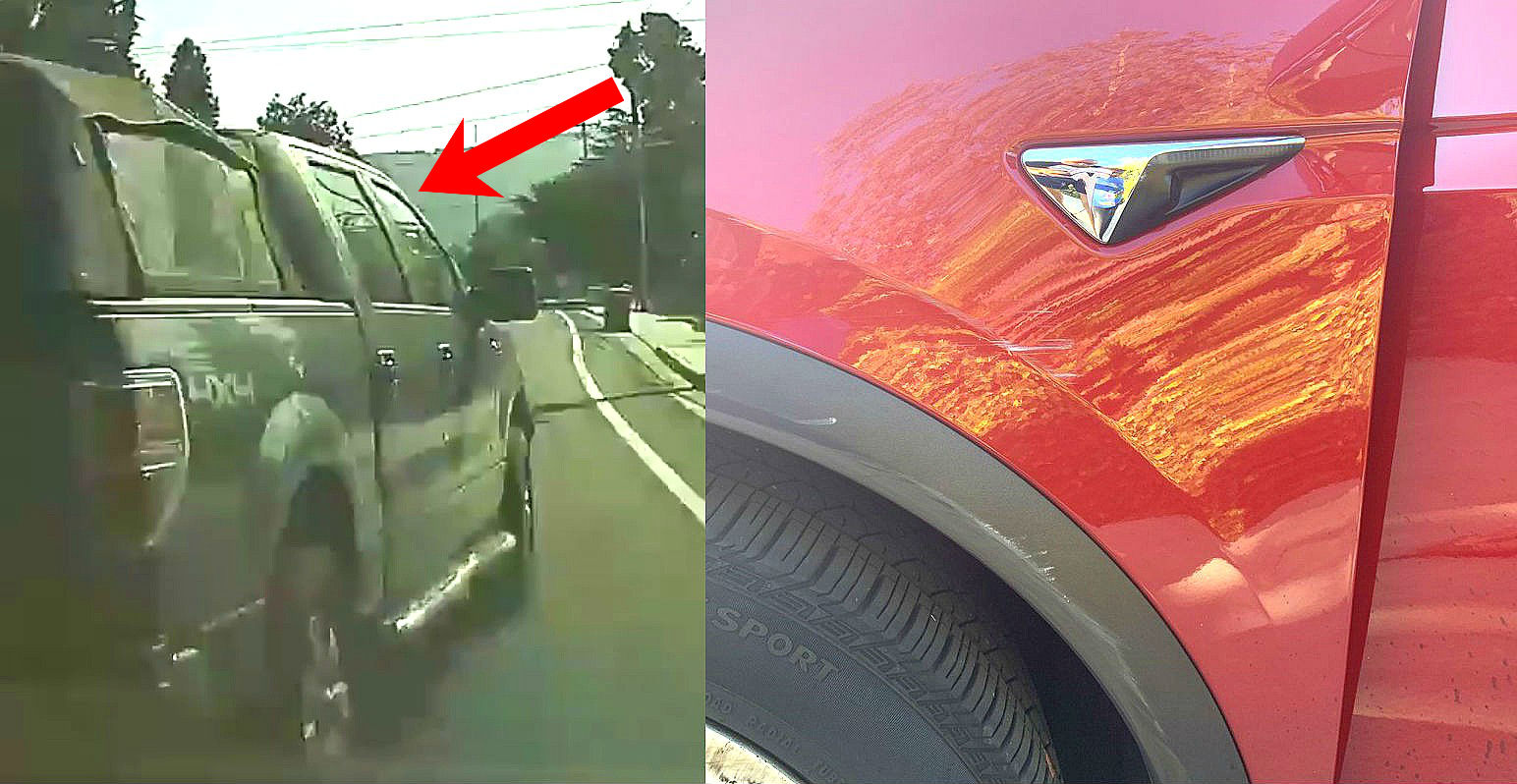 A Tesla owner is thanking his Model X’s incredible durability after his all-electric SUV was involved in a hit and run incident with a particularly aggressive Ford F-150 driver. During the unfortunate encounter, which was captured on the Model X’s built-in dashcam, the F-150 could be seen crossing over a double yellow lane and hitting the Tesla’s side. The Model X, a tank of an electric vehicle that it was, brushed off the massive impact, fully protecting its passengers.

John, president of Tesla Owners Silicon Valley, was on a casual 4th of July fast food run with his son at Los Gatos, CA, when the incident happened. After turning into a double-yellow road, the Tesla owner was shocked to see a Ford F-150 storming down the street. The pickup truck, which had no front license plate and a damaged soft bed cover, crossed into the oncoming lane and attempted to cut in front of the Model X. Unfortunately, the reckless pickup driver grossly miscalculated, sideswiping the Model X in the process.

A look at the dashcam footage captured by the all-electric SUV’s front camera showed that the Ford F-150 felt the full brunt of the impact. Immediately after slamming into the Tesla, the pickup truck skidded as it bounced off the electric SUV, nearly flipping over as it tried to regain control. As soon as the F-150 found its traction, the pickup driver floored the accelerator, speeding away from the scene of the incident. The Model X owner later stated that he was tempted to give chase due to what was obviously a hit-and-run, but with his son in the car, he opted to call the authorities instead.

John promptly headed to the police station immediately after the encounter with the reckless Ford F-150 driver. The police took photos of the damage to the Model X and gave the Tesla owner a card. The video of the crash from the Model X’s built-in dashcam was also sent to the authorities. Some members of the Tesla community have remarked that it might not be too difficult for the police to locate the truck driver, since the suspect’s truck had notable characteristics like a damaged soft bed cover and front passenger tire area, chrome running boards, and no front license plate. The Tesla owner has mentioned to Teslarati that there has been no update from the authorities yet.

Based on the incredibly reckless behavior of the Ford- F-150 driver, it appears like the the man behind the Ford F-150’s wheel might have been intoxicated or incapacitated in some way. Despite the minor damages incurred by the Model X due to the crash, the Tesla owner is nonetheless thankful for his vehicle, which has, in more ways than one, proven itself as a futuristic, comfortable tank of an SUV that can handle a hit and run crash with a Ford F-150 without getting fazed.

Watch a Tesla Model X brush off a reckless Ford F-150 in the videos below.