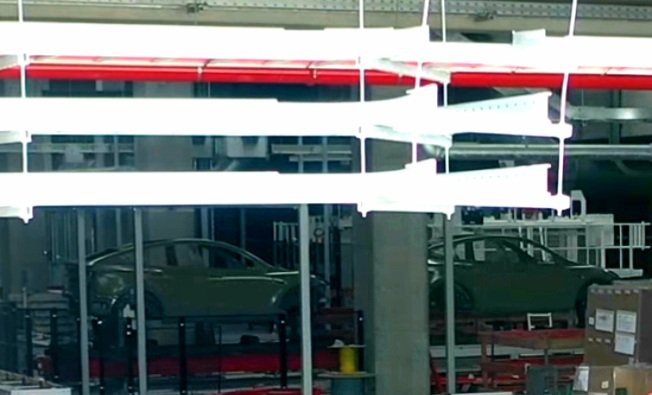 The images of the Model Y bodies were captured by drone operator Daniel, who runs the flybrandenburg YouTube channel. During a flyover this Sunday, the drone operator managed to sneak a look through a small opening of Giga Berlin’s paint shop building. As luck would have it, two primed Model Y bodies happened to be there.

copyright by : @flybrandenburg
( all rights reserved ) .

A lot of excitement has been surrounding Gigafactory Berlin’s paint shop, which is on track to become one of the auto industry’s most advanced paint shops, as per remarks from Tesla CEO Elon Musk. The CEO previously noted that the facility’s new painting innovations should pave the way for colors that change depending on where the onlooker views the vehicle.

This, of course, is only one of the advantages of Gigafactory Berlin’s paint shop. The facility is also poised to allow Tesla to offer more paint options for its customers, which should provide more variety to the vehicles produced in Germany. Tesla’s current paint lineup is very conservative, with the company currently offering just five color options.

Gigafactory Berlin is yet to receive its final approvals, but Tesla is already doing all it can to prepare for the Model Y’s upcoming production. Previous images from the facility showed that the company has been testing its production line equipment. And now, it appears that the paint shop is being fired up as well. Hopefully, such initiatives could allow Tesla to ramp the Made-in-Germany Model Y smoothly.

Watch a recent drone flyover of the Gigafactory Berlin site in the video below.