When Tesla Model 3 owner Jade Insko left his home this past Monday, he thought his drive heading to his workplace would be just like any other. As Insko drove east on Highway 14 near Cape Horn, WA, though, a freak accident happened. Out of the blue, a 37-pound boulder crashed into his electric car. The impact was massive, shattering a large part of the Model 3’s windshield. The rock also bent the steering column, split the dash, and moved the practically immovable 15″ center touchscreen before landing in the passenger seat.

“All of a sudden, my car just seemed to explode as this 37-pound rock flew through the windshield, smashed into the dashboard, and bounced directly into the passenger seat,” the Model 3 owner said.

Relating his story to a local news outlet, the Model 3 owner stated that it took him a second before he could process the freak accident. Fortunately, his Model 3, bent steering column and split dashboard and all, was still able to move. Insko was eventually able to pull over to the side of the road, despite being unable to see due to glass in his eyes and face. 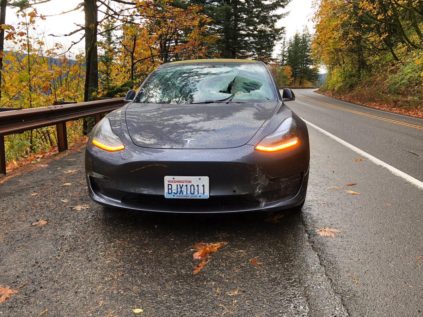 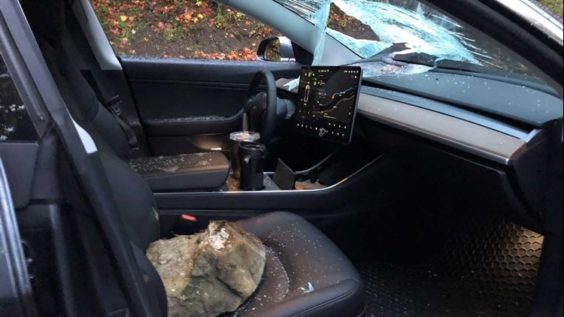 “I just pulled forward slowly with my hazards on. I couldn’t see anything, I had glass in my face and eyes and a giant hole in my windshield,” he said.

Insko was alone in his vehicle, and fortunately enough, he was largely unharmed. He had some minor injuries due to glass from the shattered windshield, but other than that, Insko was fine. His prized Model 3, though, was extensively damaged. Apart from the main impact from the 37-pound boulder, the Model 3’s front end was also damaged due to other rocks on the road, which the car hit while it was pulling over. In a later statement to KGW8 News, Insko noted that he and his family were shaken by the experience.

“I have a wife and two young children, (ages) 7 and 8, and it hit them hard as well. Knowing that could have been, in an instant, the end,” he said. 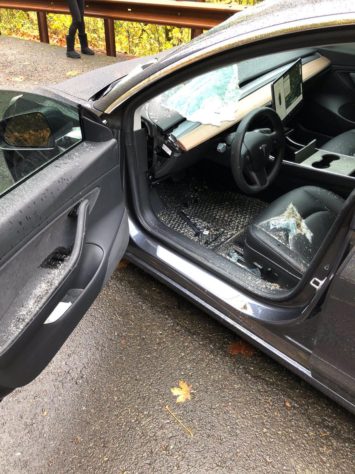 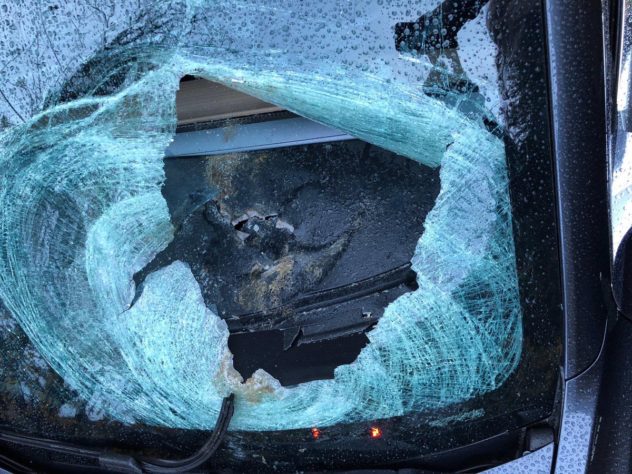 While the freak accident could have ended on a tragic note, Insko has nonetheless adopted a rather positive take on the incident. After the crash, the Model 3 owner decided to keep the boulder that hit his car. He plans to keep it in his yard as a monument and a reminder about how bad things could have been.

Tesla’s electric cars have a reputation for being some of the safest vehicles on the road. Thanks to their all-electric design, Tesla’s vehicles have large crumple zones and a low center of gravity. Just this past September, the Model 3 earned a stellar 5-Star Safety Rating from the National Highway Traffic Safety Administration. In the days that followed the announcement, Tesla released a follow-up blog post stating that among the vehicles tested by the NHTSA, the Model 3 stands as the car that has the lowest probability of injury.

Teslas have been involved in freak accidents in the past. Last September alone, a Model X owner from Texas was driving through Sugar Land when it was hit by an actual crashing airplane. The aircraft in the incident was owned by the DEA, and according to later reports, the crash was caused by a mechanical failure. The pilot was able to conduct an emergency landing on the road, but during the maneuver, the aircraft clipped several power lines and hit some vehicles, including the Model X. Thanks to the electric SUV’s durability, the Model X’s driver and his companion were able to escape from the accident unharmed.