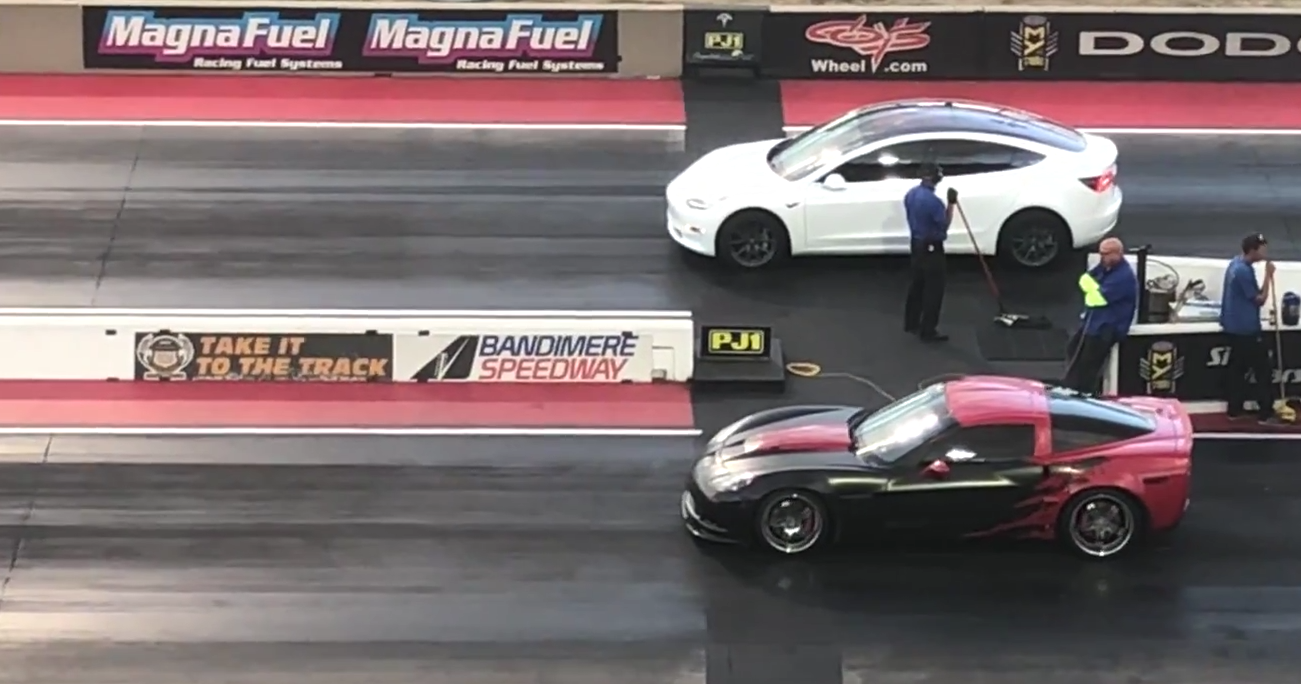 Thanks to the instant torque provided by their electric motors, Teslas are capable of incredibly impressive launches. Even against supercars like the Ferrari Superfast and the McLaren 720S, Tesla’s vehicles usually get the jump on their fossil fuel-powered competitors. What happens, then, if a Tesla is beaten off the line?

As a video of a race between a Model 3 Performance and a Chevrolet Corvette shows, even a Tesla that launches badly is a challenging vehicle to outrun. Tesla owner Travis Fischer took his Model 3 Performance to the Bandimere Speedway in Colorado last October. The car was not fully charged, as there weren’t many places nearby to Supercharge the electric sedan. With 89% of battery left, though, the Model 3 owner opted to race his car anyway.

Specs-wise, the Model 3 Performance is quite impressive. When Tesla initially announced the vehicle, the company listed it with a 0-60 mph time of 3.5 seconds, a top speed of 155 mph, and a combined 450 hp and 471 lb-ft of torque from its two electric motors. Tesla later adjusted the Model 3 Performance’s specs, updating the car’s listed 0-60 mph time to 3.3 seconds.

In one of Fischer’s runs, though, he found himself racing against a Chevrolet Corvette. Fischer did not state exactly which type of Corvette his Model 3 Performance raced against, but based on its seemingly round taillights and bulging hood; it appears to be a sixth-generation vehicle. The Corvette C6 ZR1, the generation’s top-of-the-line variant released in 2009, was hailed as one of the most powerful production cars that GM ever produced, thanks to its 6.2-liter V8 engine that produced 638-hp and 604 lb-ft of torque. The car also had a 0-60 mph time of 3.3 seconds, a quarter-mile time of 11.2 seconds at 130 mph, and a top speed of 200.5 mph, comparable to some of Italy’s predigreed supercars.

Unlike most races involving Teslas, the Model 3 Performance was beaten off the line by the Corvette. As the run continued, though, and as the Corvette shifted gears, the Model 3 actually started gaining on the muscle car. The electric sedan continued pulling until it crossed the quarter-mile mark. The Tesla ultimately completed the race in 11.748 seconds while running at 115.56 mph. The Corvette, on the other hand, crossed the finish line in 11.781 seconds at 122.13 mph.

Watch the Model 3 Performance battle the Chevrolet Corvette in a quarter-mile drag race in the video below.