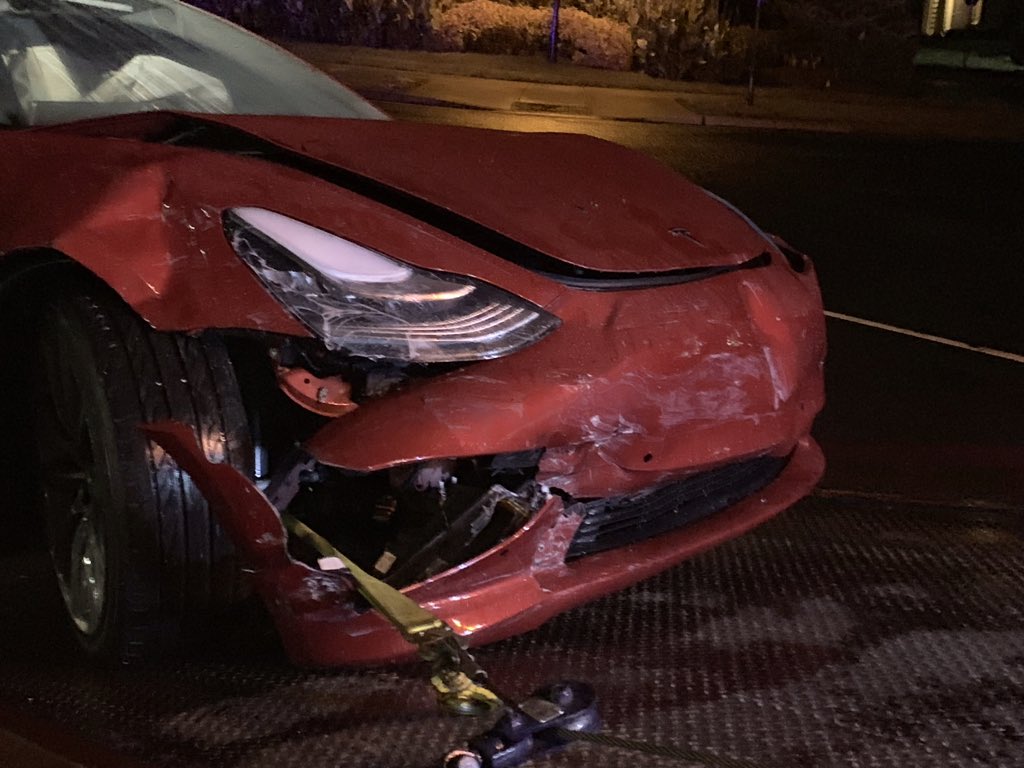 Tesla’s built-in Dashcam feature is currently being rolled out with the wide release of Software Version 9. The feature, which utilizes the video feed from the vehicle’s narrow forward-facing camera, allows owners to save recordings of events on the road into a USB flash drive. Tesla Model 3 owner Brad King recently proved just how useful V9’s built-in Dashcam is, after his electric vehicle was involved in a major accident in Charlotte, NC.

The Model 3 owner waited a long time for his electric car. Being a first-day reservation holder, it took just a little more than two years before King was able to take delivery of his vehicle. Brad drove home his Model 3 on April 28, 2018, parking it inside a garage that was painted and decorated similarly to a Tesla showroom. Since then, the Model 3 has traveled about 7,000 miles, driving a sizable amount of them on Autopilot. After the vehicle received the Software Version 9 update, King’s Model 3 some new features, including the built-in Dashcam.

While driving down Rea Road in Charlotte, NC yesterday, tragedy struck. The roads were wet and slippery due to the rain, and the Model 3 owner was driving around 40 mph. As could be seen in the Dashcam footage captured by the Model 3, a white Honda Accord with no lights and a damaged front fender suddenly pulled in front of the electric car and stopped in the middle of the road. King stepped on the brakes, but the electric car hit the damaged fossil fuel-powered car nonetheless. The front of the Model 3 was totaled as a result of the accident, though King noted that there were no injuries.

As it turned out, the driver of the white Honda Accord did not have insurance at all. Worse, the driver didn’t even have a license due to a suspension. Authorities eventually arrived, but King and the Honda Accord driver’s accounts of the accident were conflicting, complicating the situation. Ultimately, Tesla Version 9’s built-in Dashcam became the determining factor, as the Model 3 owner was able to prove to the authorities that the Honda Accord did stop in the middle of the road prior to the accident.

Sharing some insights on the accident to Teslarati, King noted that it was quite tricky to engage the Model 3’s Tow Mode after the crash happened, seemingly due to the damage incurred by the vehicle. As a result, it took around an hour to get the electric car to a flatbed truck. The driver of the tow truck even suggested that it would be a great idea to place a tow area at the rear of the Model 3, to make towing easier. True to Elon Musk’s statement earlier this year, the Model 3’s glove box automatically opened after the accident.

The unfortunate fate of Brad King’s Model 3 shows just how useful a built-in Dashcam solution is for Tesla’s electric cars. Had the Dashcam function not been active during the accident, it would have been quite difficult to prove the Honda Accord driver’s fault. For now, though, the Model 3 owner is simply hoping that he could get behind the wheel of another Tesla in the near future.

Tesla’s built-in Dashcam solution has long been requested by owners of the company’s electric cars. Prior to the release of Software V9, Elon Musk announced on Twitter that Dashcam features would make it to the initial Version 9 rollout. It did not take long before advanced early access users started sharing footage of their vehicles’ Dashcam, which were surprisingly very clear. For now, the built-in Dashcam relies solely on the vehicles’ narrow forward-facing camera, though there is a pretty good chance that later iterations of the feature would utilize the feed from the other cameras installed on the electric cars.

Watch the footage from Brad King’s Model 3 V9 Dashcam in the video below.