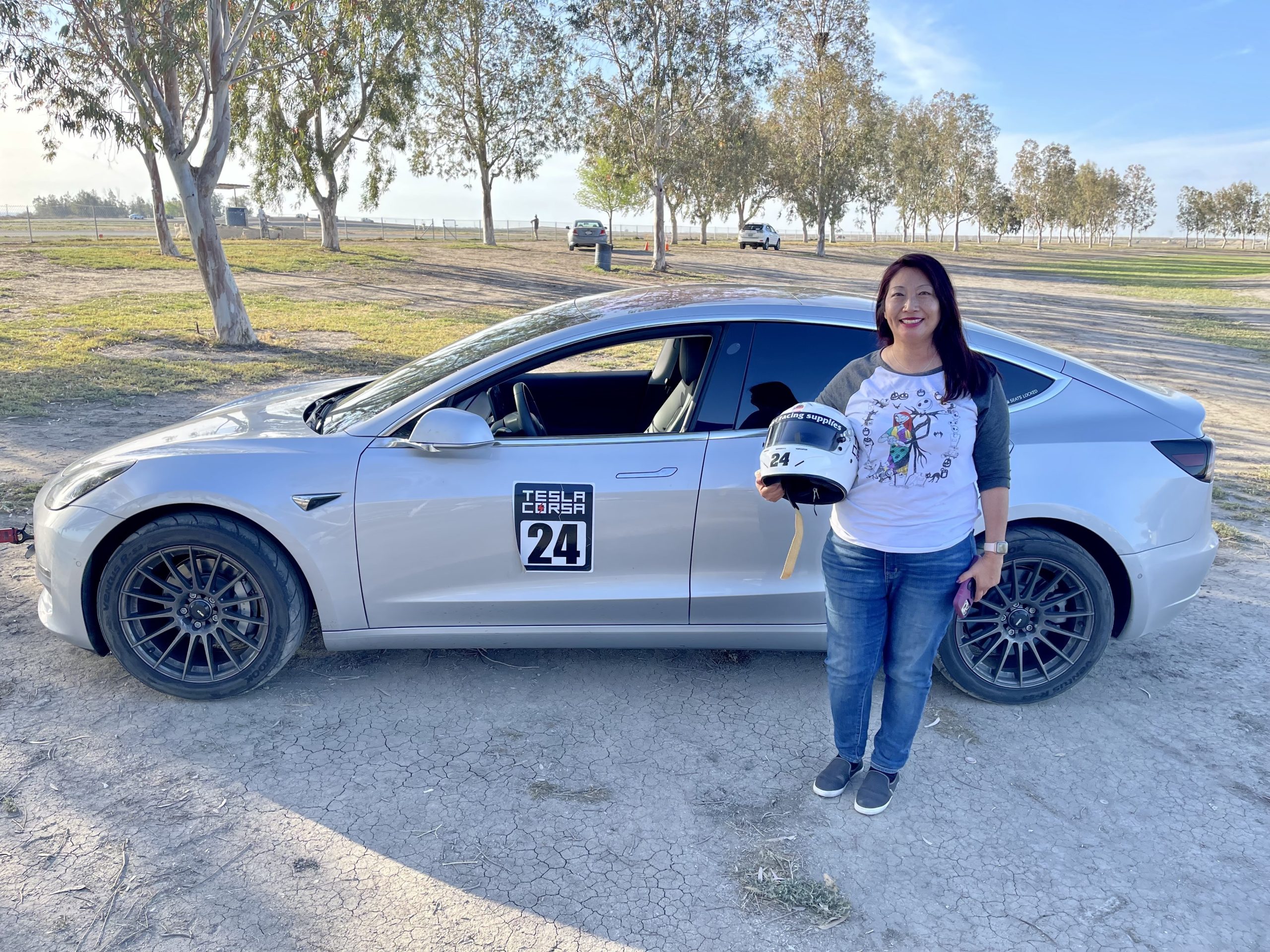 Tesla owner Lily Fetterer shared her story of how she began racing her Model 3. It was a chilly September Sunday morning in San Francisco when I met with Lily to explore the city in her silver Tesla Model 3. Lily, a member of the Tesla Owners Club of East Bay, had kindly offered to give me a tour of the city, including a few places to look out over the bay.

The morning fog showed up to join us for most of the day, and as I climbed hills and mountains, well, they seemed like mountains to me,  I got to know Lily. One of the first things I noticed about her Model 3 was that it had TeslaCorsa 24 emblazoned on both the driver’s and passenger’s side doors.

TeslaCorsa, sponsored by Unplugged Performance, was founded to encourage Tesla owners to experience the limits of their cars in a professionally managed race track environment. Lily is a race car driver who shared her story with me.

I asked her how she got into racing and how long she’d been racing. Lily and her family are fans of Tesla and already owned a Model X.

“I tried to find new hobbies to pursue that would be safe given Covid restrictions. I love driving fast in my Tesla, so I was ecstatic when I found TeslaCorsa while browsing the web.”

“I joined for the 10th TeslaCorsa event at Laguna Seca. They told me that if I could do that course in two minutes, I might have some talent that would be worth pursuing. I got two minutes and four seconds, which was close enough.  I’ve been racing ever since.”

Lily told me it was a bit intimidating as a middle-aged woman who races in an EV.

“I am often the only female racing. At my first Tesla Corsa event, another female was also trying it out for the first time with her boyfriend. At other events, racers have had their parents participate too. I love how it’s an experience that people want to share with others.  Racing is something that many can enjoy, not just hard-core racers.”

Lily pointed out that a big reason for her success is the great support she gets from other racers.

“Tom Mak, one of the best TeslaCorsa racers, has been my mentor throughout the process. He’s always showing me videos, giving me feedback, riding with me, and encouraging me to be better.”  Steven Case has also driven with me and driven my car, so I can understand how to push my car to its limits”

Around the same time Lily began racing, she got involved with the Tesla Owners Club of East Bay.

“I absolutely love the club. I think they do so many wonderful activities,” she told me. Lily noted that there are a lot of great Tesla clubs in the area but what she likes most about the East Bay club is that they have a lot of family-friendly events.

“We did a cruise to the top of Mount Diablo recently. They have a lot of fundraisers as well. I think that’s the thing I love the most. They give back to the community. It’s not just about getting people together and having fun, but it’s about giving back. At almost every event, there’s a donation aspect.”

“The Tesla Owners Club of East Bay frunk or treat event is coming, and I hope to win that competition. Halloween is my favorite holiday, and I love The Nightmare Before Christmas. I’m a huge addict, so my house and my frunk will be decked out with that theme. The frunk or treat will be at Ehrenberg cellars in Livermore so the kids will have candy, and the parents will have wine. “

“There’s also an upcoming TOEB event on November 18th where club members will help us change our cabin air filters, and in exchange for the help, we bring a bag of groceries to donate for less fortunate people. “

I asked Lily to share her advice for any women and girls who may want to get into racing.

“Don’t be afraid to give it a try. It’s different than driving on a freeway because you have tight turns, corners, and walls. Not all tracks are the same, so you can work your way up to trying more difficult tracks later. Racing is exhilarating, and if you like skiing or any speed activity, you’ll probably enjoy it too. I think that when people give it a try, they’ll find themselves hooked.”