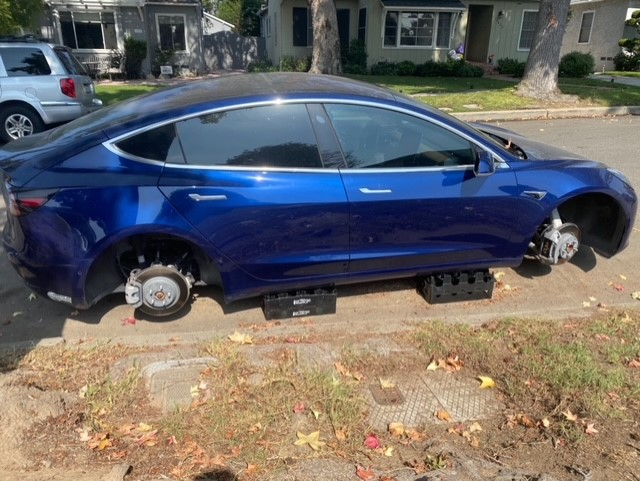 Tesla owners in the Los Angeles area are being warned by local police of an uptick in theft targeting the all-electric vehicles’ tires and rims. The Pacific Division of LAPD recently posted a photo on their official Twitter account displaying a Model 3 on blocks with those specific parts removed. As a precaution, Tesla owners have been advised to activate Sentry Mode, use a flash drive to record the resulting video, and only park in well lit areas.

“Tesla owners in Palms and Mar Vista Area, be aware #Tesla Rims and Tires are a hot commodity in the black market,” the department tweeted. “** DO ** Activate the #sentrymode and plug a flash drive to record events…** Whenever possible, park in well lit public areas.”

Tesla owners in Palms and Mar Vista Area, be aware #Tesla Rims and Tires are a hot commodity in the black market.
** DO ** Activate the #sentrymode and plug a flash drive to record events 🎥🎥🎥 https://t.co/JR7f465BQ2
** Whenever possible, park in well lit public areas. pic.twitter.com/pexeAnMWH0

Tesla owners have had their fair share of concern for their vehicles’ safety over the years as a result of the brand being specifically targeted. In early 2019, the cars were the subjects of dozens of break-ins seemingly concentrated in the San Francisco Bay Area, although similar reports came in from other regions as well. The Model 3, in particular, was vulnerable to attacks in its back quarter window by lacking any sensors, and the placement was also convenient for thieves to pull down the backseat and access any valuables in the trunk. Owners came together over social media to strategize a response themselves, but the events eventually played a significant role in Tesla’s introduction of Sentry Mode a bit later that year.

Aside from break-ins and theft, Tesla owners have also had to contend with targeted vandalism of their vehicles. A number of keying incidents have been captured by Sentry Mode, and tire slashing has even made an appearance on the video footage. The motive behind such events isn’t always clear. In the case of thefts, at least, the higher price of Tesla cars seems to lead thieves to assume high priced items like iPads and similar electronics will be inside.

The success of Sentry Mode is easiest to see by the number of crimes it has managed to capture and solve. A quick search on YouTube or Google will reveal numerous stories ranging from confusing, such as a random grocery cart attack on a Model 3, ridiculous, like the instance a local politician attempting to flee a hit and run in a parking lot, to downright frightening, as in the case of an attempted murder of a mayor in Norway. While Teslas are notoriously hard to steal, perhaps Sentry Mode will help deter thieves from their latest spree reported by LAPD.

A news report on the LAPD warning can be seen below: