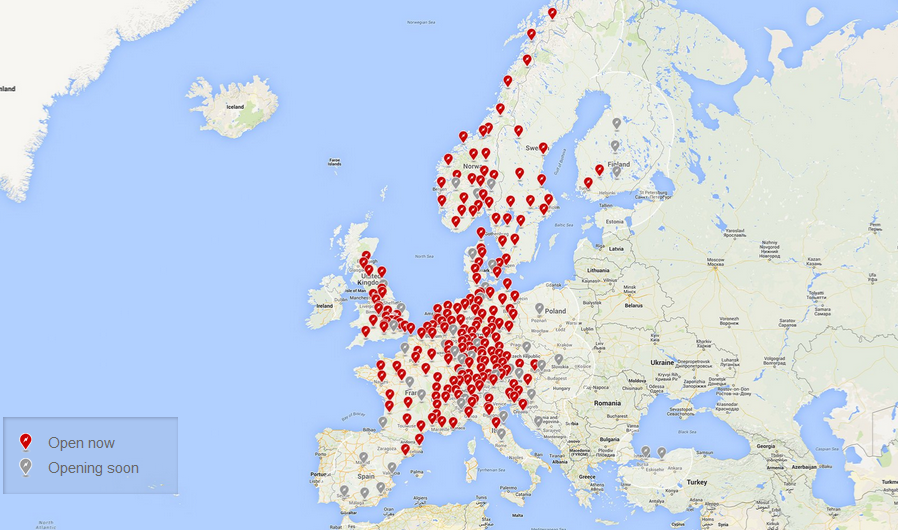 Tesla is planning an aggressive expansion of its SuperChargers into southern, central, and eastern Europe in 2016.

As of January 2016, 590 Tesla Supercharger locations have been installed worldwide with a total of 3,419 physical Superchargers within its network. Much of Italy, Spain, and Portugal remain underserved, along with most of central Europe and Russia, but that will soon change if Tesla is to hold to its 2016 projections.

Tesla plans a major expansion of its Supercharger network into southern and eastern Europe in 2016 according to the latest Supercharger map published on the company’s website. New locations in Poland, the Czech Republic and Slovakia have been recently sighted, and by the time 2016 is done, the company plans to further extend its Superchargers to Spain, Portugal, Italy, Turkey, and Russia. By the end of this year, Tesla owners should be able to travel from Dublin to Moscow and everywhere in between without being out of range of a Tesla Supercharger location. Tesla’s continued focus on serving existing customers and would-be buyers through the expansion of its charging network gives it a significant lead over other manufacturers looking into entering the EV space.

Elon Musk has recently discussed the potential of Teslas being able to perform cross country travel without a human driver on board using its new Summon feature in roughly 2 to 3 years. The vehicles will recharge themselves autonomously along their journeys using a device similar to its automatic charging ‘snake bot’. Earlier in the year, Tesla announced that it was piloting a  liquid cooled Supercharger in Mountain View, CA that’s said to be able to charge at the same, if not higher power levels, while increasing the length of the charging cable without overheating.

Arguably, the expansion of Tesla’s charging infrastructure has given it an insurmountable lead in the race to building a viable mass market electric vehicle.

Be notified when Tesla Superchargers, service centers, stores, and destination chargers come online, all in real-time through the Tesla Lifestyle App.