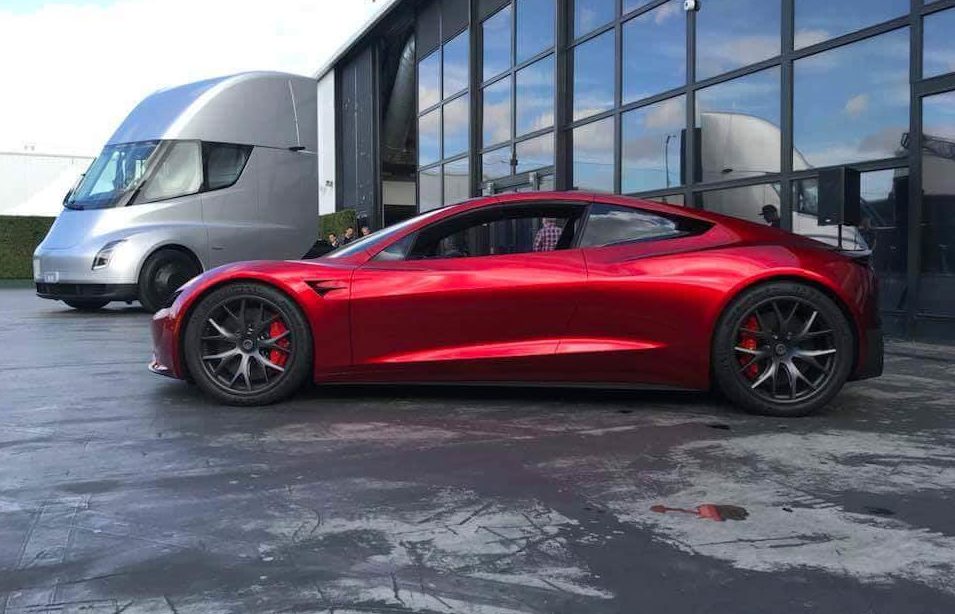 Tesla Semi and Roadster could be relying on a “battery breakthrough”

Elon Musk and Tesla have made some bold claims for the new Tesla Semi and Roadster. Those who understand batteries have been scratching their heads trying to figure out how the company can deliver the specs it’s promising – and concluding that the only possible way is some as-yet-unannounced advancement in battery technology.

Musk says the Tesla Semi will be able to haul 80,000 pounds for 500 miles, and recharge to 400 miles in 30 minutes, which would revolutionize the trucking industry. As for the Roadster, its promised 0-60 acceleration of 1.9 seconds effectively shuts down every one of the world’s baddest supercars, and its touted 620-mile range would be double that of any EV produced to date.

According to Bloomberg, analysts at Bloomberg New Energy Finance point out that Tesla Semi’s announced specs would require a battery capacity of between 600 and 1,000 kilowatt hours (6-10 times the size of the largest Model S battery). Using current technology, an 800 kWh battery pack would weigh over 10,000 pounds and cost more than $100,000. That’s just for the battery – Tesla has said its entire truck will start at $150,000. It seems plain that Tesla is counting on falling battery prices to square the circle. “The first Tesla Semis won’t hit the road until late 2019,” Bloomberg points out. “Even then, production would probably start slowly. Most fleet operators will want to test the trucks before considering going all-in. By the time Tesla gets large orders, batteries should cost considerably less.”

It isn’t just the capacity of the battery that’s causing analysts to wear out their calculators – Musk’s claim that the Tesla Semi will be able to add 400 miles of charge in 30 minutes would require a charging system 10 times more powerful than Tesla’s current Supercharger – which is already by far the most powerful in the industry.

“I don’t understand how that works,” said Bloomberg New Energy Finance EV Analyst Salim Morsy. “I really don’t.” Tesla’s current generation of Superchargers have a power output of 120 kilowatts and can add about 180 miles of range to a Model S battery in 30 minutes. To meet Tesla’s charging claim for the Semi would require the promised Megacharger to deliver an output of at least 1,200 kW.

Perhaps Tesla’s biggest bombshell is the promise that it will guarantee truckers electricity rates of 7 cents per kilowatt hour, which Bloomberg estimates could translate to fuel savings of up to $30,000 a year. Musk says that adding solar panels and battery packs at the charging stations will account for at least part of the cost reduction. However, BNEF’s Salim Morsy insists that Tesla will have to heavily subsidize those electricity rates – he estimates that Tesla will pay a minimum of 40 cents per kWh. “There’s no way you can reconcile 7 cents a kilowatt hour with anything on the grid that puts a megawatt hour of energy into a battery,” Morsy said. “That simply does not exist.”

Of course, that’s no different from what Tesla does for its current Supercharger network, offering free electricity to many customers, while paying almost $1 per kWh to produce it, according to Morsy’s estimate.

And how about that Roadster? To deliver its promised range of 620 miles, it will need a 200 kWh battery pack, twice the size of Tesla’s largest currently available pack. Mr. Morsy predicts that Tesla will stack two battery packs, one on top of the other, beneath the Roadster’s floor.

Even with a double-decker pack however, it’s hard to escape the conclusion that Tesla is counting on improving battery tech to make the Roadster, like the Semi, feasible. Battery density has been improving at a rate of about 7.5 percent a year, and that’s without any major breakthrough in battery chemistry.

“The trend in battery density is, I think, central to any claim Tesla made about both the Roadster and the Semi,” Morsy said. “That’s totally fair. The assumptions on a pack in 2020 shouldn’t be the same ones you use today.”

Viswanathan explains that the power output of a motor is limited by the power draw from each battery cell. Because the Roadster’s pack is double the size, the power draw may not be that much more than that of a Ludicrous Model S.

Viswanathan told Jalopnik that the most modern battery cells offer specific energy of about 240 watt-hours per kilogram. Using that assumption, the Roadster’s 200 kWh battery pack should weigh roughly 1,800 pounds, a huge advance over the previous-generation Roadster. With clever use of lightweight materials, the Roadster could still come out under the nearly two-ton curb weight of the Nissan GT-R, an acceleration benchmark among sports cars.

Viswanathan concludes that a 0-60 time of 1.9 seconds and a range of 620 miles are quite feasible, although there are several other factors that will come into play – much depends on the vehicle’s tires and aerodynamics.

Meanwhile, at least one analyst thinks Tesla’s latest revelations (or claims, or fantasies, depending on your point of view) have implications that go far beyond the Semi and the Roadster. Michael Kramer, a Fund Manager with Mott Capital Management, told Marketwatch that he suspects improved battery capacities and charging times could make their way into all future Tesla vehicles.

“I’d have to imagine that Tesla has figured out how to put this technology on all of their cars, which means every car could get a full charge in under 30 minutes,” Kramer wrote. Once the Model S “is equipped with the 200 kWh battery pack in the new Roadster, which I can’t imagine is too far down the road, the range issue for the Tesla is officially dead.” (Elon Musk has said that Models S and X will not get physically larger packs, but improved energy density could increase capacity while keeping the size of the pack the same.) Someday soon, Kramer says, “The Model S would likely be able to drive further on one charge than a car on a full tank of gasoline.”

Tesla Semi and Roadster could be relying on a “battery breakthrough”