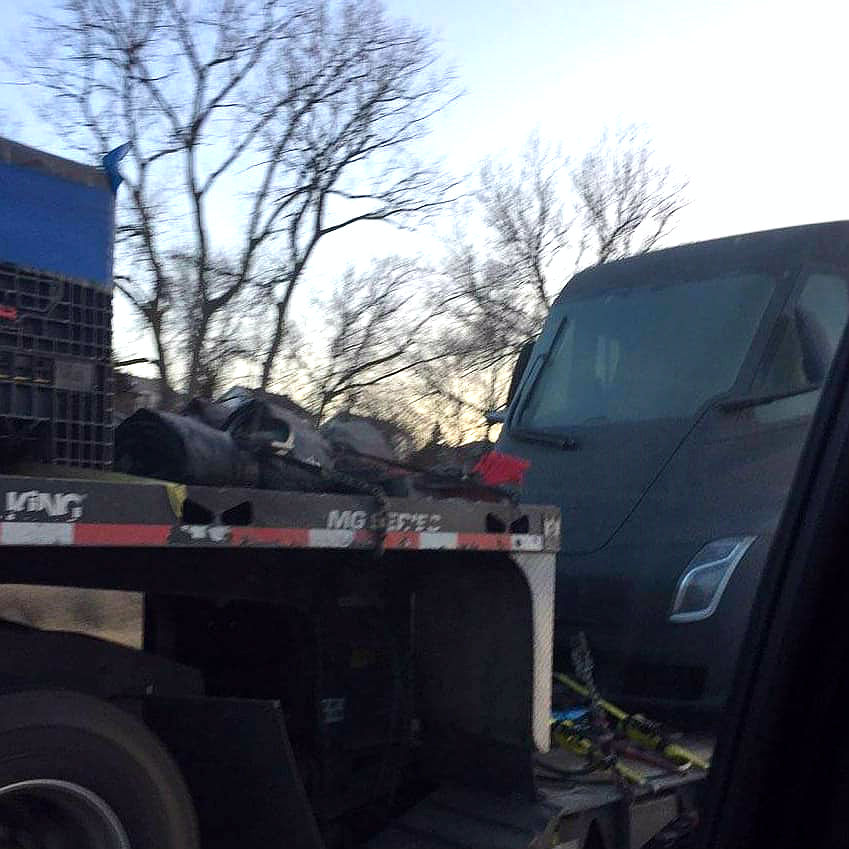 Tesla’s short-range, matte black Semi prototype has been sighted on a highway in Des Moines, IA, as it was being transported on a flatbed truck. The latest Tesla Semi sighting was shared by Instagram user John Gee, who was able to snap two photographs of the vehicle late Sunday.

Conversing with Teslarati on the social media platform, Gee noted that the truck was heading east into I-80 in the Des Moines, IA area. The Tesla enthusiast further stated that he noticed some equipment at the back of the short-range Semi.

“There looked to be a ‘charging terminal’ on the back of the trailer, so I imagine they were taking it somewhere to set up testing,” Gee wrote.

The “charging terminal” equipment that the Tesla enthusiast noticed at the back of the electric truck is noteworthy, especially since the Elon Musk-led company previously revealed that it is developing the Semi’s on-site “Megachargers” in collaboration with its customers. The in-house charging infrastructure will be hosted by the Semi’s buyers, and would be strategically located in key areas that are frequently traveled by fleet operators and spaced close enough to maximize the electric truck’s range. 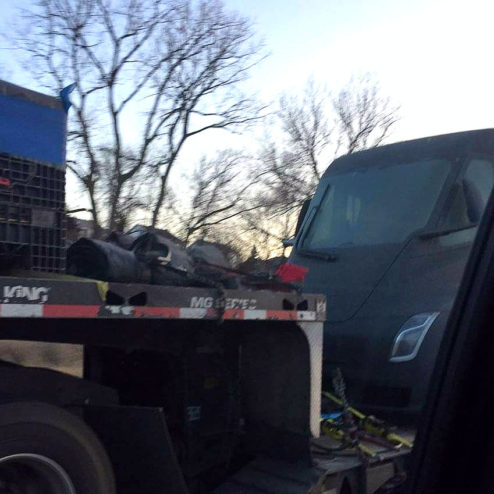 The Tesla Semi being transported on a trailer at Des Moines, IA. [Credit: John Gee/Instagram] 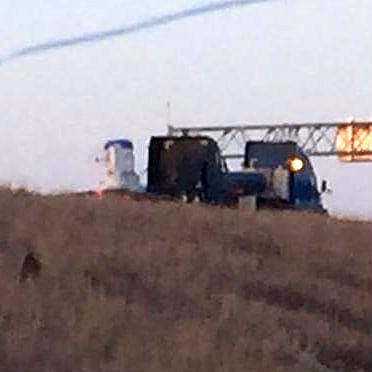 The Tesla Semi being transported on a trailer at Des Moines, IA. [Credit: John Gee/Instagram]

While the reason behind the Tesla Semi’s presence in Des Moines, IA remains unknown, the city does host the headquarters of one of the vehicle’s reservation holders — Ruan Transportation Management Systems — which announced its orders for the Tesla Semi back in January.

According to Ruan, the company has been in touch with Tesla even before the quad-motor all-electric trucks were unveiled last year. Ruan also stated that Tesla had invited representatives from the company to take part in several on-site meetings and discussions six months before the trucks were unveiled to the public. In a press release about its Semi reservations, Ruan Vice President of Fleet Services James Cade stated that the Tesla trucks have the potential to revolutionize the transport industry.

“These new trucks stand to revolutionize interstate transport and change the way we do business. Ruan has always been a leader in efficient transport and logistics, so it makes perfect sense to explore what these trucks could do for us and our customers,” Cade said.

Ruan has been involved in environmentally-friendly initiatives even before it placed orders for the Tesla truck. The company is one of the official partners in the US Environmental Protection Agency’s SmartWay Transport Partnership — a program by the freight industry and the EPA aimed at decreasing greenhouse gases and air pollution. Ruan’s participation in this program has been admirable so far, with the company earning the SmartWay Excellence Award from the EPA for three years.

Sightings of the Tesla Semi prototypes in the wild have increased over the past month. Just a few weeks ago, the silver, long-range Semi was spotted in the Anheuser-Busch brewery in St. Louis, MO. A week after that, the same vehicle was sighted at private demo for PepsiCo employees in Dallas, TX. The two Semi prototypes were also spotted seemingly driving in “Convoy Mode” on a CA highway last week.