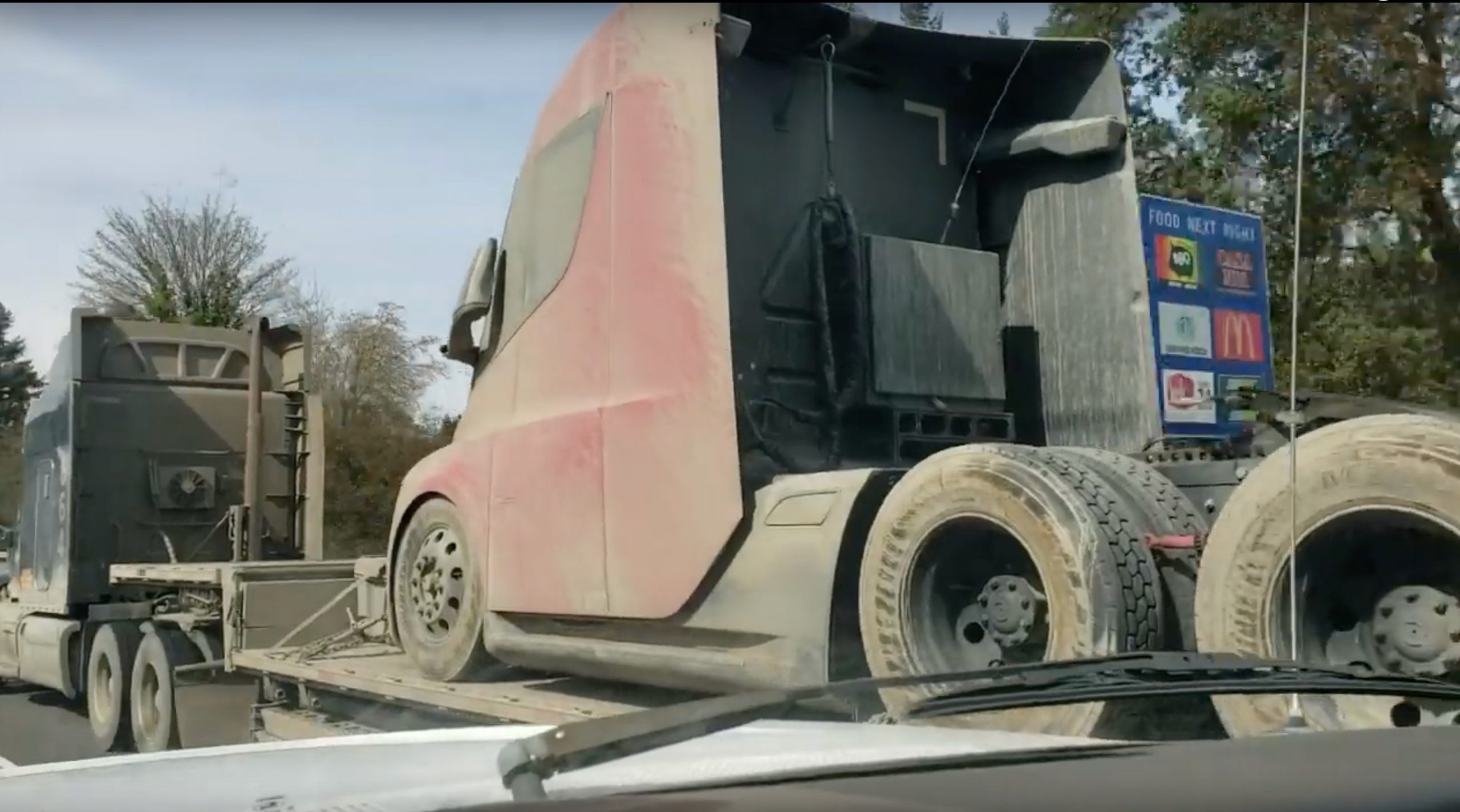 A Tesla Semi prototype was spotted in transport, presumably, after having completed several weeks of winter testing near its cold-weather testing facility outside of Delta Junction, Alaska.

Various sightings of the Tesla Semi from over the weekend suggest that the all-electric semi-truck was making its way down the western seaboard of the United States from Washington, through Oregon, and back to its Fremont, California test facility.

Video captures of a Tesla Semi being transported on the back of a semi-trailer shows the prototype’s salt-covered exterior as it makes its way back from cold-climate performance testing under snowy conditions.

In January, Tesla noted in an email communication to Semi-truck reservation holders that the truck was undergoing hazard testing at its test facility in Fremont, California.

“Over the last few months, we have continued testing the trucks in real world conditions. We also spent time at a proving ground to evaluate the truck’s resilience over rougher road conditions. Using instruments mounted on the vehicle, we collected road input data to ensure the trucks can handle severely degraded roads. At our own Fremont test facility, we subjected the trucks to a number of high energy, discreet events such as curb strikes, pot holes, and other harsh inputs to confirm the truck is capable of handling common hazards.”

In the same communication, the company indicated that Tesla Semi has already completed “important engineering development checkpoints” and would be rolling out more “production-representative vehicles” vehicles in 2021.

Ahead of planned production, Tesla Semi would undergo several weeks of winter testing. The company has an extreme cold testing facility in Alaska where its vehicles, including the Tesla Model S and Model 3, undergo intense winter testing.

“In the short term, the team is gearing up for several weeks of winter testing to validate the truck’s performance in cold weather and low traction conditions. We are excited to share insights from the winter with you, as we will be able to highlight the major advantages of electric traction and motor control, which no diesel powertrain can match,” said the company in an email to a Tesla Semi reservation holder.

Actually I re-read the letter it says they will have limited volume production 2nd qtr of 2020. pic.twitter.com/A2hTYyTVdz

Tesla has not confirmed where Semi-truck production will take place, only noting in its fourth-quarter earnings update letter that the facility would be in North America.

CEO Elon Musk indicated in the Q4 earnings call that Tesla Semi would be initially produced in limited quantity as the company focused efforts on increasing battery production capacity. Given the size of the all-electric truck and its energy needs, having a strong supply of battery cells is crucial to preventing a strain on supply for its consumer vehicles like the Model 3 and Model Y.

“So, the thing we’re going to be really focused on is increasing battery production capacity because that’s very fundamental because if you don’t improve battery production capacity, then you end up just shifting unit volume from one product to another and you haven’t actually produced more electric vehicles,” said Musk when asked about the Tesla Semi. “So, that’s part of the reason why we have not, for example, really accelerated production of the Tesla Semi because it does use a lot of cells and unless we’ve got a lot of battery cells available, then — and say like accelerating production of the Tesla Semi would then necessarily mean making pure Model 3 or Model Y cars. And so, we’ve got a really — make sure we get a very steep ramp in battery production and continue to improve the cost per kilowatt-hour of the batteries.”

A Tesla Semi was captured on Sunday, making its way down Interstate 5 in Olympia Washington, roughly 60 miles south of Seattle. Credit: Tvlog.