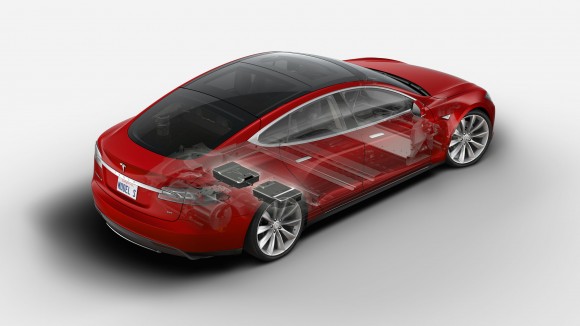 Tesla’s destination charging initiative is moving fast in 2015, with expansion in North America, China and Hong Kong, along with expansion efforts in Europe coming in the 2nd quarter according to a Tesla shareholder letter. With many developments happening Tesla service centers will now install dual-chargers to Model S cars—needed for optimum destination charging—and remove this installation overhead from the Fremont plant.

Tesla Motors Club commenters noticed this change in early March when Tesla removed the twin charger option ($1,500) from the online Design Studio build out process that enables purchasing of the vehicle directly though the company’s web site. Tesla service centers will now retrofit Model S’ with the onboard twin-charger for a total cost of $2,000, a decrease from the previous $3,500 charge prior to March of this year.

The move screams factory efficiency and larger production volume needed for the Fremont plant as the company attempts to deliver 50,000 Model S vehicles in 2015—this does bolster Elon’s supply constrained argument.

This is classic Musk finding revenue in the short- and long-term (think Model 3), as more Model S owners may move towards a dual-charging retrofit. It’s a very attractive option for owners that look to plan an all electric road trip. With Tesla HPWC chargers available (capable of charging at 80 amps and 59 miles/hr.,) at your hotel or accommodation, an owner has much greater flexibility in “hitting the town” without having to worry about an over night charge. For example, drive around Boston for the day and come back to the hotel before dinner. A quick rest at the hotel, with the Model S plugged into the destination charger, could potentially yield over 100 miles of range before one heads back out for dinner.

It really affirms Musk’s goal of creating the total car, first and foremost, that does everything a regular gas car can do. No limits.

As a recent road trip planner, the ability to charge quickly is a prerequisite for a family vacation. Tesla will have more “competition” with the expansion of the CHAdeMO DC-fast charging infrastructure on the east and west coast. Maryland and Pennsylvania are adding DC charging stations at turnpike stations in the keystone state and the surrounding Baltimore and Washington D.C. area.

Tesla has started to deliver Tesla’s CHAdeMO adapter to customers which costs $450 on top of the $2,000 twin-charging option. The cost alone may provide some deliberation for owners. Keep in mind that one should expect to pay for fast-charging access once outside of Tesla’s Supercharger and destination charging network.

We’ve heard of some buyer’s remorse from Tesla owners who plunked down the $2,000+ for the additional options only to realize that they don’t use the twin-chargers much. They may change their tune if they happened to be charging cost free at a fine resort in the Sierras

So what are owners thinking when it comes to the retrofit cost? Leave your comments below or engage with us @Teslarati!