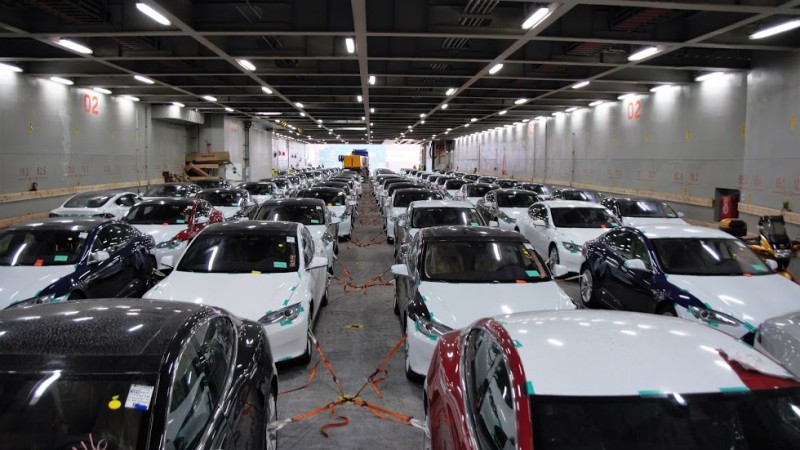 Norwegian shipping company Nor Lines has struck a deal to deliver Teslas from Bremerhaven, Germany direct to the west coast of Norway using LNG powered ferries to reduce carbon emissions from diesel transporters. Norwegian shipping company Nor Lines has made an agreement with Tesla Motors to ship its cars using a natural gas powered ferry. Shipping the cars by sea will significantly reduce carbon dioxide emissions compared to using traditional diesel powered transporters. The first cargo of 79 Tesla Model S sedans arrived on the west coast of Norway on March 29.

Nor Lines has been negotiating with Tesla for some time. The fact that its ships use liquid natural gas instead of heavy bunker oil seems to have been the factor that won Tesla over.  “I don’t think we would have crossed the finish line as easily if the ships were run on heavy oil,” Nor Lines representative Anders Sandvik told Norway’s PursuitGreen.

This is a first for Nor Lines because the voyage will be followed up with a full complement of cargo headed south on the return voyage. “There was one time when the ship sailed home empty,” Sandvik says. “But we now have a delivery of 79 cars combined with regular line traffic. With all the other goods we have on board, that results in good utilization of vessels and line structure.” Tesla Model S being unloaded from a shipping ferry in Norway [Source: Nor Lines]

The arrangement with Tesla happened almost by accident. When Sandvik bought a Tesla Model S last fall, it made him aware of how much unused capacity there was at the port of Drammen. “I didn’t think it made any sense for cars going to western and northern Norway through a port in the east of the country,” Sandvik says.

He got in touch with Tesla and negotiations began. “In January we took up the thread again and now we are ready for the first pilot project.” he says. Tesla was very interested in making sure its cars would arrive in a timely fashion, but once Sandvik assured them they would, the company accepted Nor Lines’ proposal and pricing structure.

The shipping company is hoping Tesla will ship 40 to 50 cars a week from Bremerhaven, Germany directly to Norway. That would eliminate hundreds of truck shipments every year. Sandvik praises Tesla for being willing to consider using Nor Lines to ship its cars. “I think it is wonderful that Tesla dares to be a little different than the traditional commodity owner. They really take the environment seriously and actively seek to minimize their carbon footprint. I miss such vigor in other industries today,” Sandvik says.

Special thanks to Leif Hansen of Norway for bringing this story to our attention, and to Anders Sandvik for the collaboration.