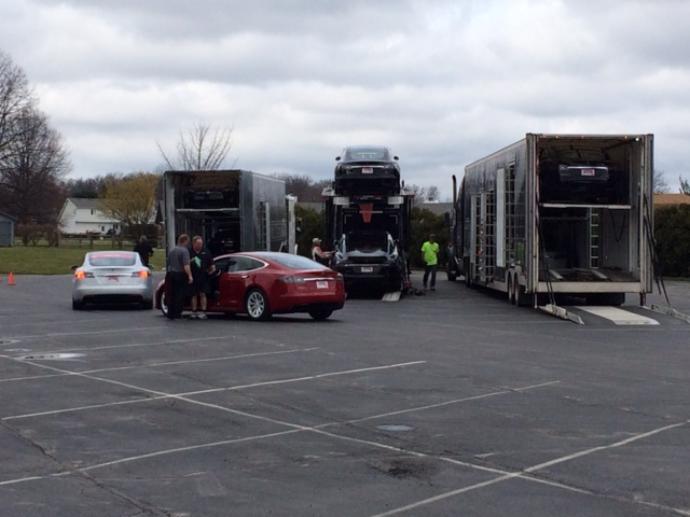 Ohio entrepreneur Stanley Chlebowski and owner of  Tesla supply company Maumee Assembly & Stamping has purchased a fleet of 21 Tesla Model S sedans to be used as corporate cars across three companies that he runs.

Maumee Assembly & Stamping, U.S. Utility Contractor Co., and Reliance Rental & Leasing Co. will have 15 Model S to be used as company cars for executives of the three companies. The others will be made available on a lease-to-own basis from Reliable Rental.

Maumee Assembly & Stamping manufacturers body parts for the Tesla Model X, but is also negotiating with Tesla to provide parts for the Model 3, according to The Blade. Chlebowski also wants to become involved in installing Tesla Superchargers through his U.S. Utility company. “I’ve gotta support them,” he said. “I think they’re excited about this. I know my employees that are going to be driving these cars are excited about this.”

“We’re not a dealer — Tesla doesn’t have dealers — but we enjoy working with them,“ Mr. Chlebowski says. ”They are very good to work with, and it’s the jet age. This is the future. The more we dug into these Teslas, the more I liked them. Yes, they’re expensive. You might as well figure the range of $85,000 to $135,000, maybe even a little more, but I wanted to get their attention.”

The fleet of 21 Tesla Model S were delivered to nearby Brandywine Country Club where several of Chlebowski’s employees were on hand to learn more about the cars from the Tesla representatives. “It’s definitely exciting,” said Travis Barta, Vice President of operations at Maumee Assembly and Stamping. “As you can see, there’s some buzz about it. It’s something we’re passionate about.”

Mr. Chlebowski purchased Muamee Assembly & Stamping in 2010. At that time, the company had 12 employees and was making catalytic converters. Today it has 210 employees and manufactures a variety of parts for several customers, including Tesla and truck maker Navistar.

Maumee is a small city located southwest of Toledo, Ohio. “When you get into manufacturing, especially tool-and-die and industrial electricians, they ain’t out west. They’re not there. The auto industry is here,” Mr. Chlebowski says.

Tesla is anxious to expand its fleet sales program. Chlebowski and his three companies are a prime example of why Teslas make good company cars. He has two Model X SUVs on order that are expected to be delivered in June, bringing the total number of executive-use cars in his fleet to 17.  For Chlebowski, doing business with Tesla is just good business for his own companies.