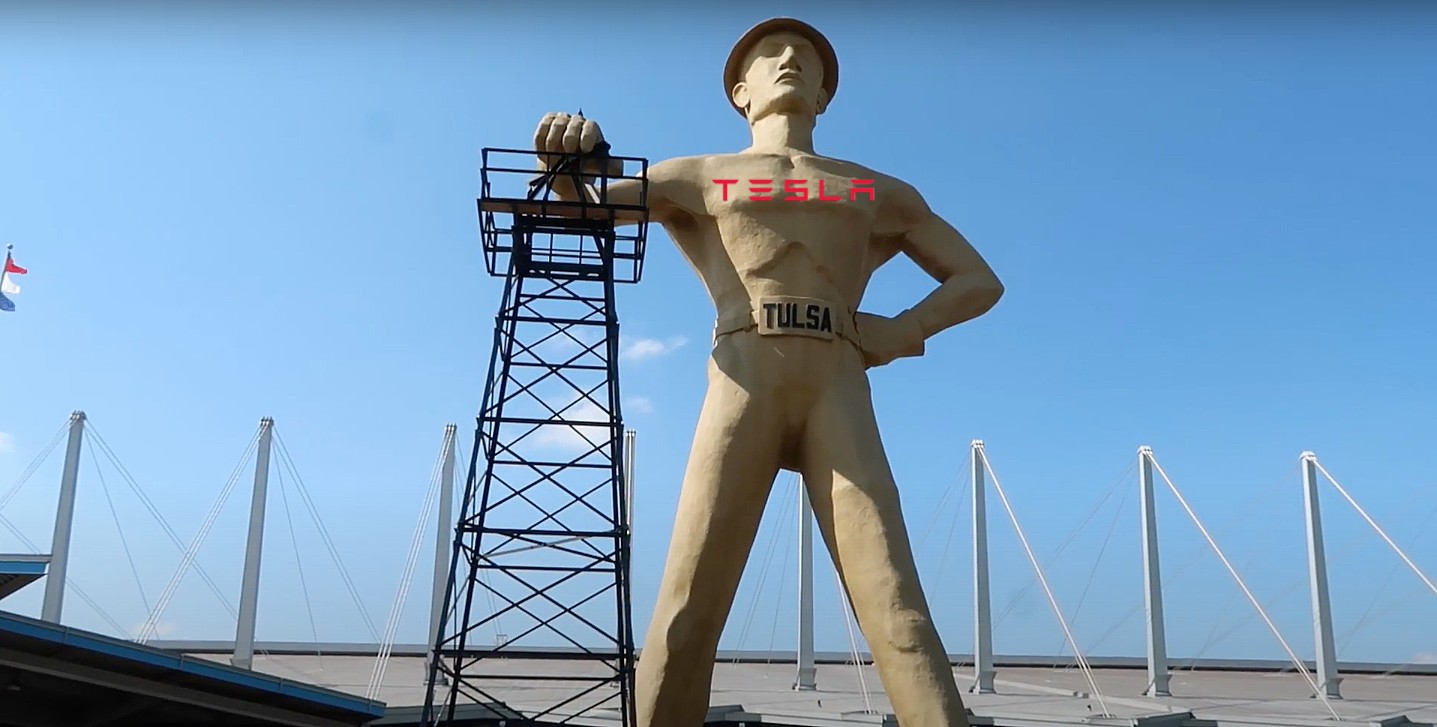 Tesla is welcome in Tulsa, Oklahoma, and the city’s leading authorities are revising an oil statue in Expo Square by adding the signature “T” logo that is infamously associated with the California-based electric car maker. The Oklahoman city with a rich history in oil drilling is turning tides, looking to initiate a future of clean-sustainable energy, catalyzed by the company leading the electric vehicle industry.

The push for the electric automaker to come to the City located in Northwest Oklahoma continues as the infamous Golden Driller has had the Tesla “T” painted across his chest. The statue, notable for its significance as a symbol of the city’s rich history in oil drilling, also is having Tesla CEO Elon Musk’s face painted on it.

It is unclear what entity is behind the painting, according to Mark Andrus, who is the president and CEO of Expo Square, after he told Tusla World that he declined to comment who painted the Driller’s updated look.

However, Andrus says that Expo Square is happy to play a part in the attempt to woo Tesla to bring its largest Gigafactory to date to Tulsa.

A town rich in oil culture with plenty of drilling companies still in existence, Tulsa appears to be ready to embrace the electric transportation revolution fully. The Driller’s new-found inspiration meets the indication of this as the statue shows all signs of moving from an oil driller to a Tesla-supporting driver.

The case for electric transportation infiltrating a prevalent location for oil drilling seems to hint toward a transition in the favorable source of energy for vehicles. Just eight years ago, in 2012, Tusla was listed as a potential candidate to be named “Oil Capital of the World” by the American Oil and Gas History Society.

Now, the same town continues to petition for attention from the world’s largest and most successful electric automaker, as battery-electric vehicles become more popular across the globe.

The new factory could provide a substantial positive economic impact in Tulsa, providing perhaps over 10,000 jobs. Tesla’s upcoming Giga Berlin plant in Germany is expected to employ 12,000 people, but the company has stated that its newest facility will be the biggest yet.

This means at least 12,000 people are going to be used in Austin or Tulsa, providing plenty of people with manufacturing jobs in the state.

After Elon Musk announced that his company would be building a new production facility in the central United States, Texas emerged as the favorite due to Musk’s consistent mentioning of the Lone Star State.

Despite Texas’ appeal to the Tesla CEO, Tulsa was named as another potential location. While many U.S. states petition for the right of housing, the automaker’s newest factory, Tulsa and Austin, Texas, have emerged as the two favorites, according to sources who discovered Tesla’s preferences late last week.