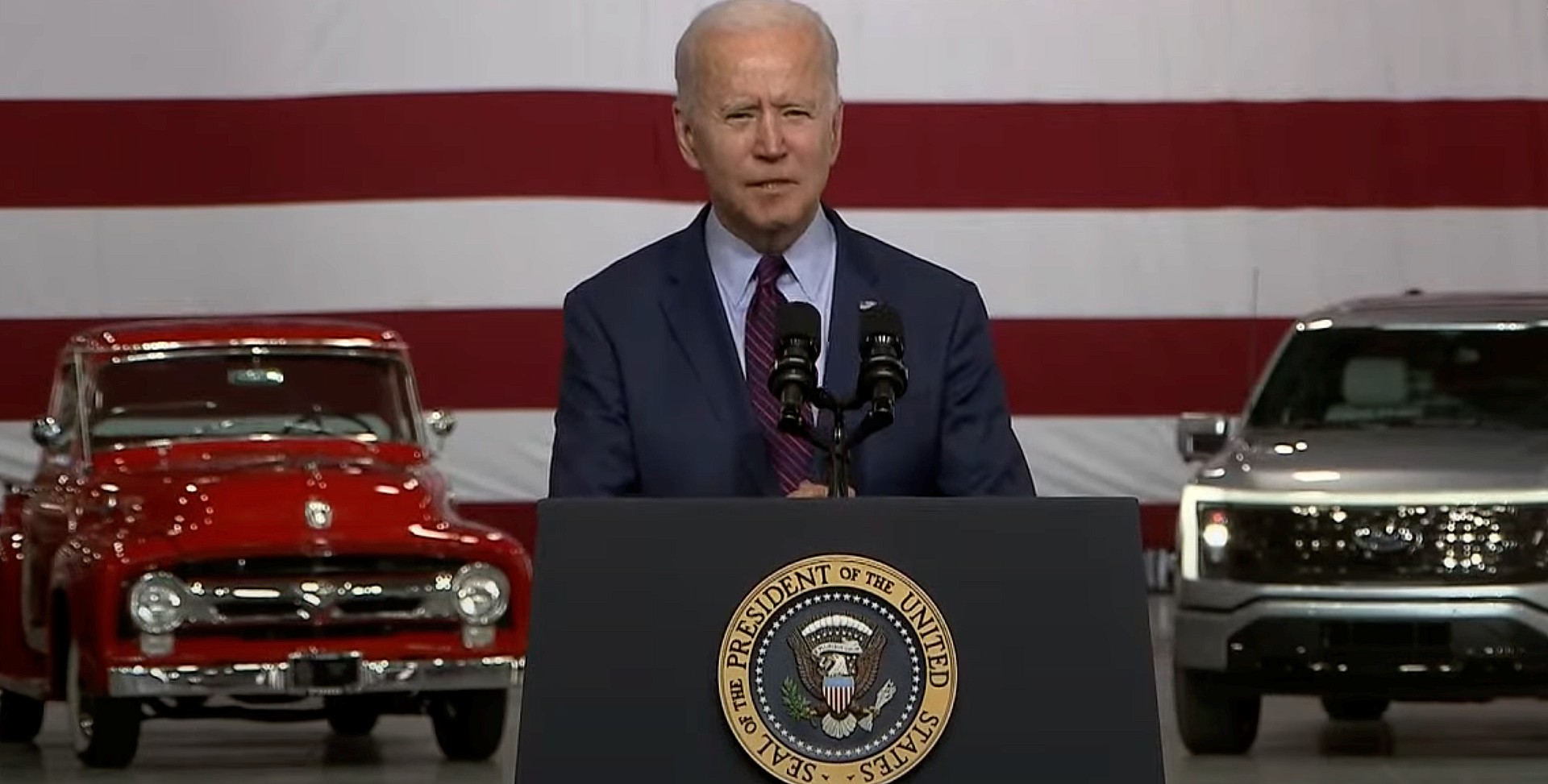 Earlier today, President Joe Biden spoke at Ford Motor Company’s Dearborn plant in Dearborn, Michigan, with intentions of delivering more details regarding his plans to expand the EV sector in the United States through a more broad charging infrastructure, freely unionized manufacturing jobs, and a heavily supportive dialogue that failed to include any details on companies that are pushing electrification forward, like Tesla. In my opinion, it showed that the President doesn’t have a broad understanding of electrification. While that’s okay, his position as President of the United States requires more comprehension on subjects that involve reducing emissions and increasing the number of EVs on the road, a direct factor in the reduction of greenhouse gases entering the atmosphere.

His speech gave Ford entirely too much credit, especially as the main essence was combining EV production with unionized jobs for U.S. workers.

In the speech, President Biden commended Ford for its extensive history of automotive legacy, something that nobody can deny. Ford has a rich history when it comes to cars, and some of its vehicles are still the best and most popular on the market. Two of the four vehicles I have owned have been Fords, the most recent being a 2008 Ford Escape Hybrid. It was the best car I’ve ever had. My Dad has owned nothing but Fords for as long as I can remember.

President Biden was increasingly concerned about the number of jobs that could be offered to U.S. workers or whether American companies would have to depend on foreign countries to build and produce EVs. It simply wasn’t an option for the American economy, the President hinted. Ironically, his speech took place at a facility owned by a company that outsourced its first mass-market electric vehicle production to Mexico.

With Ford entering the EV sector with the Mustang Mach-E, it opened up a favorable introduction into the industry for the company that Henry Ford started in 1903. The vehicle is safe and was awarded an IIHS Top Safety Pick award, and has received favorable reviews from owners thus far. Despite minor issues early on related to software, the Mustang Mach-E undoubtedly has a bright future in the sector and will likely be one of the company’s most popular vehicles for the coming years. But it’s not going to throw Ford into EV superstardom, especially not with the U.S.-produced tune that Biden spoke highly of during his speech. The vehicle is actually built at the Cuautitlán Assembly Plant in Cuautitlán Izcalli, Mexico.

That’s not going to help the American economy, nor will it supply U.S. workers with union jobs that Biden talked so much about during his speech.

The issue is, Biden seemed to give Ford credit for things that they’re just not very well-versed with quite yet. President Biden mentioned during the speech that the United States was falling behind China in terms of EV tech and battery cell efficiency. “Right now, China is leading in this race. Make no bones about it. It’s a fact.” The problem is this just simply is not true.

Tesla’s electric vehicles are the leader of the industry. With performance and range ratings that sit well above any other vehicle on the market, there is no secret why the company continues to be held to such a high standard. Recent data compiled by the EV Sales Blog shows that Tesla was the most popular EV OEM through Q1 2021, leading the partnership between SAIC, GM, and Wuling by nearly 82,000 units. Tesla sold roughly 184,500 cars through Q1. SAIC-GM-Wuling sold 102,574.

In batteries, Tesla’s 2170 cells come from Panasonic in Nevada at Tesla’s Gigafactory in Sparks. It is currently developing the 4680 cell, which will provide more power, range and decrease production costs by a significant margin. Tesla is effectively on the verge of decreasing electric vehicle costs by a significant margin, and in a few years, it expects to build a $25,000 car that will reach price parity with gas-powered rivals. While Biden spoke highly of Ford’s Georgia-based battery production plans for the electric F-150, he didn’t mention Tesla’s production of the 2170 cells in Nevada, nor did he mention the massive project at Kato Road in Northern California, just a stone’s throw away from Tesla’s Fremont Factory. This building is where Tesla is developing the 4680 cells, and it is rumoredly a Top 10 capacity cell manufacturing facility in the world.

Tesla’s 4680 Kato Rd. facility has a top 10 capacity, and it’s not even close to finished

While Biden’s enthusiasm for electric vehicles seems to be evident, it appears that the President needs a crash course in the world of EVs. It is rather bothersome to hear our President give zero credit to the American EV powerhouse Tesla, and while I can understand that Tesla may be on the list of banned words during a speech at Ford factories, it is a scare tactic to state that it’s an absolute fact that China is kicking our butts in EV development.

Make no bones about it, President Biden. It’s a fact that Tesla is leading this race. It’s not a close one at the current time, either.

I would love to see Biden make his way to Northern California for a tour of the Fremont Factory, or even a talk with Elon Musk regarding what Tesla is doing for the planet in terms of EV production. As Tesla has taken a commanding lead in the sector, legacy automakers have been forced to oblige and adapt to the changing industry. It is no coincidence that when these companies talk about who they are gunning for, Tesla is atop the list.