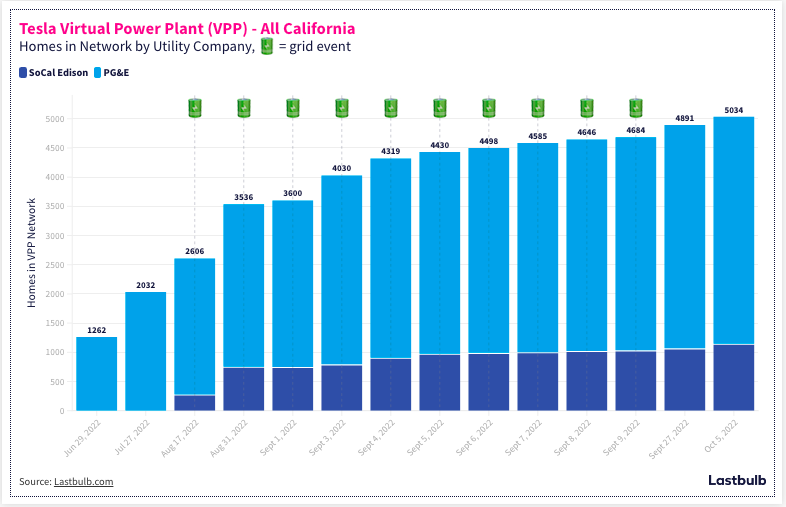 Tesla VPP pilot program in CA now has over 5,000 homes

Tesla’s virtual power plant (VPP) beta program in California now has over 5,000 homes participating. Tesla’s program, which expanded to include Southern California Edison (SCE) homeowners, initially started with Pacific Gas and Electric (PG&E). It offered a $2 per kWh compensation for those participating in the VPP.

In the graph below, you can see that on October 5, 2022, there were a total of 5,034 homeowners participating in the Tesla VPP beta program. When the program began in June 2022, there were only 1,262 participants.

Rick Davis, the founder of Lastbulb which provided the data in the above graph, is a participant in the program. He told Teslarati,

“Participating in Tesla’s virtual power plant gives a glimpse of an energy-independent future where people work WITH utilities to provide energy abundance while sharing in the profits. Now all I want is the ability to auction clean energy to the grid year round.”

Rick initially created the Tesla VPP tracker to help educate consumers about the drastically changing world. He pointed out that although some may follow the Elon Musk headlines a little too closely, they underestimate the power of the people, mindset, and imaginative products around the Tesla CEO. He previously told Teslarati that the Tesla VPP beta tracker will show an impressive growth story in a couple of years from ground zero.

During the intense August heatwave, the beta testing program supported the grid with over 20 MW of energy. Several grid events were recorded by beta testers who noted that the grid was being stabilized by the Tesla VPP program.

Tesla VPP pilot program in CA now has over 5,000 homes