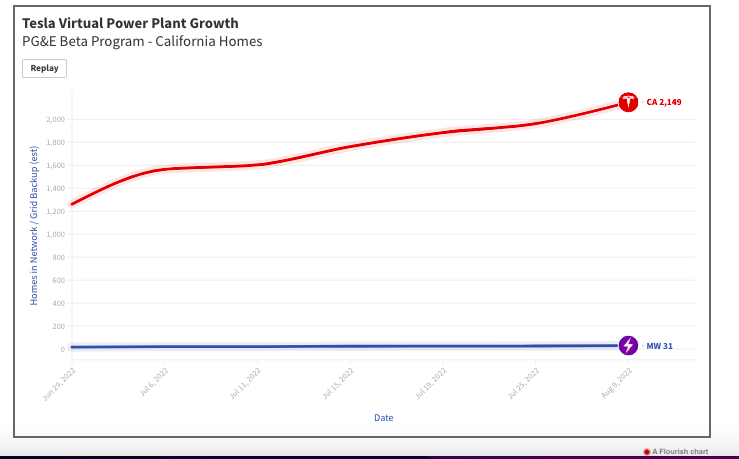 Tesla and Pacific Gas and Electric’s (PG&E) virtual power plant (VPP) beta now have over 2,000 homes participating in the program. The VPP beta program has a total of 2,149 homes in the program today which is up 12.3% in 20 days.

In July, the two companies announced that 25,000 customers were invited to participate in the program which allows homeowners with a Tesla Powerwall to send electricity to the grid when it’s needed.

To put into perspective how much energy these homes are contributing, @TeslaTydirium compared the energy being contributed to the grid by the participating households with that of a Tesla Megapack.

“2149 homes contributing 18 kWh each is functionally equivalent to a 39 MWh Megapack. Such a system is worth at least $16 million. And growing fast.”

Rick Davis, the creator of the Tesla VPP tracker which tracks the program in real-time said that he’d been estimating 7.2 kWh per Powerwall with an average of 2 per home. This reflects the on-demand discharge rate to which the network has access.

I spoke with Rick who is one of the beta testers in the VPP program. He told me that he’d designed his home around the solar shingles which he thinks are being underreported as the future of solar. He has a 24 kWh system which enables him to contribute energy to the grid.

I asked Rick what inspired him to create the Tesla VPP tracker and he told me that he wanted to help people understand this drastically changing world.

“Like with my Tesla / SpaceX alumni tracker, I saw people really didn’t understand how drastically the world is going to change for the better.

“People hang on to every ‘Elon said,’ headline, but vastly underestimate the power of the people, mindset, and imaginative products around him.  My trackers aim to shed light on what at this point feels like a first principles movement.”

“The Tesla VPP beta tracker will show an impressive growth story in a couple of years from ground zero.”