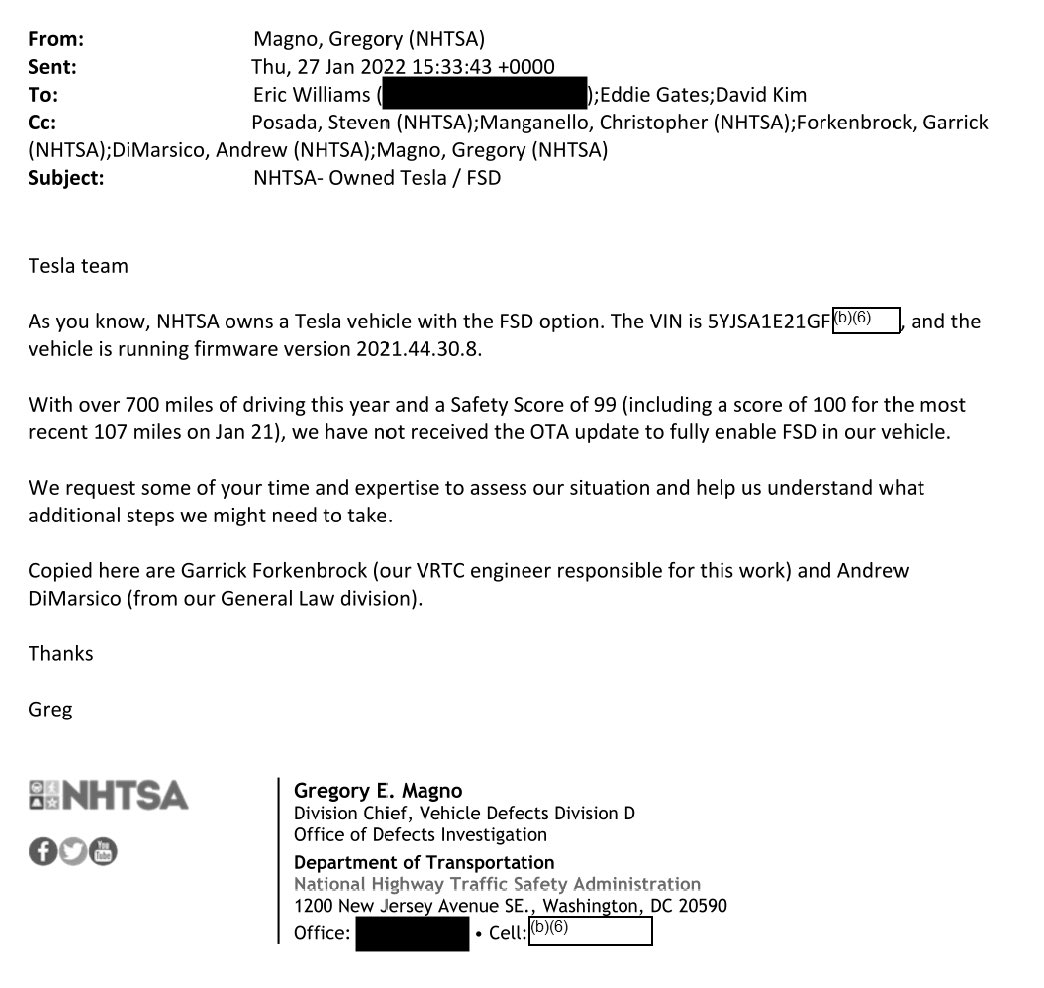 Tesla will give the NHTSA access to FSD Beta

Tesla will give the National Highway Transportation Safety Administration (NHTSA) access to FSD Beta, according to a recent tweet from Elon Musk. Elon responded to a tweet from @WholeMarsBlog who pointed out that even the NHTSA was complaining about having to participate in the safety score process that all of Tesla’s FSD Beta testers have to do.

In the tweet, @WholeMarsBlog shared a screenshot of a letter from the agency to Tesla that read:

“As you know, NHTSA owns a Tesla vehicle with the FSD option.”

“With over 700 miles of driving this year and a Safety Score of 99 (including a score of 100 for the most recent 107 miles on January 21), we have not received the OTA update to fully enable FSD in our vehicle.”

“We request some of your time and expertise to asses our situation and help us understand what additional steps we might need to take.”

The letter was dated in January 2022 but is now being brought into the public spotlight on Twitter. This comes after some drama over the weekend. The CEO of Green Hills Software and founder of the Dawn Project, Dan O’Dowd, has been relentlessly campaigning against Tesla’s FSD Beta. The billionaire has recently published television ads claiming that Tesla’s FSD Beta is not stopping for children.

These claims have been debunked several times over the weekend and I wrote about two instances. In the first one, I interviewed @TeslaDriver2022 who performed a test with child-sized Amazon boxes.

“The FSD Beta has just been getting better exponentially even since I’ve been using it. Just some of the predictions it’s got and the capabilities to understand when things are getting in their path. Not even that. Some of the most impressive stuff is just when I’m driving down the road at 45 miles an hour and there’s a car that will turn in front of me to get into a parking lot.

In the second article, @WholeMarsBlog tested FSD Beta on a child-sized mannequin and allowed Tad Park to test it on his son. In each test, FSD Beta recognized and stopped for pedestrians. He told me that the test showed that FSD Beta has no problem detecting pedestrians of all ages.

However, critics claim that the Tesla owners are vile for testing it on their children, yet are refusing to acknowledge that O’Dowd’s claims were disproven. The idea of testing such software on a child may seem horrifying to those who don’t understand the software or know how to drive.

A father who loves his child would quickly take over and brake if the software were to refuse to stop. And in the video, you can see clearly see the screen recognizing the child and stopping at a very safe distance.

In O’Dowd’s videos, the screen is hard to see and you can see some type of error message as the driver refuses to disengage. Many in the Tesla community have pointed out that the driver was accelerating. If this is the case, then FSD Beta would have to allow the driver to take over. This includes acceleration.

Aka, something like "Accelerator pedal is pressed – car will not brake" or "Front camera blocked or blinded".

People have been asking you this from Day 1, Dan.

With Tesla granting the NHTSA access to FSD Beta, the agency will most likely do testing of its own. This, I think would be a very good thing considering that the agency and its employees aren’t running for political office for the sole reason of taking down Elon Musk.

The agency and Tesla may have gone head to head a few times, however, safety is important for both Tesla and the NHTSA so it makes sense to grant the agency FSD Beta for its vehicle.

Tesla will give the NHTSA access to FSD Beta