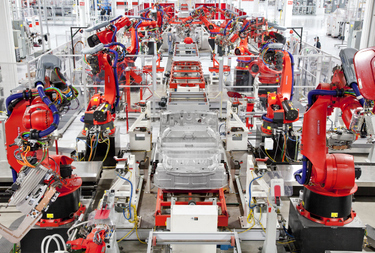 Musk detailed in a tweet early Monday morning that, in addition to the Model 3 passing inspection protocol, the production rate of the vehicle per month will be exponential until factories reach maximum production capacity.

One fan predicted that 3,000 Model 3s would be produced in October and 8,000 in November. That would add up to a cumulative total of 32,630 by the end of the year, according to the fan’s model.

Teslanomics estimated on Twitter that there will be 54,000 total Model 3 deliveries for 2017.

Based on @elonmusk tweets last night about #Model3, I estimate 54K total deliveries in 2017. Will update delivery estimator soon.. pic.twitter.com/8cL7QziVXy

All of these projections seem to line up with Tesla’s goal to produce 500,000 vehicles by the end of 2018, as initially predicted by Musk last year. Currently, Model S and X production is slightly over 100,000 vehicles per year, and 400,000 Model 3s have been reserved so far.

If Tesla can pull off these numbers as predicted, it would sky rocket the auto-giant to match the production of other major companies like Ford and Chevy.

As production increases, Musk will have to jump a major hurdle that he’s been working on to make the Model 3’s volume possible: providing batteries for each vehicle.

Teslarati has already reported that the Model 3 could use the entire world’s lithium battery supply. To answer that massive production threshold, Musk has designed and built Gigafactories in Nevada, and began battery production nearly six months ago to meet demand.

The massive factories should meet the increased production needs of the Model 3, especially as production increases into the new year.

Musk’s announcement, while significant, has largely played second fiddle to the news that the Model 3 passed initial protocols and is two weeks ahead of production schedule. Regardless, Tesla owners everywhere are feeling the buzz over the company’s step toward an affordable Tesla model.