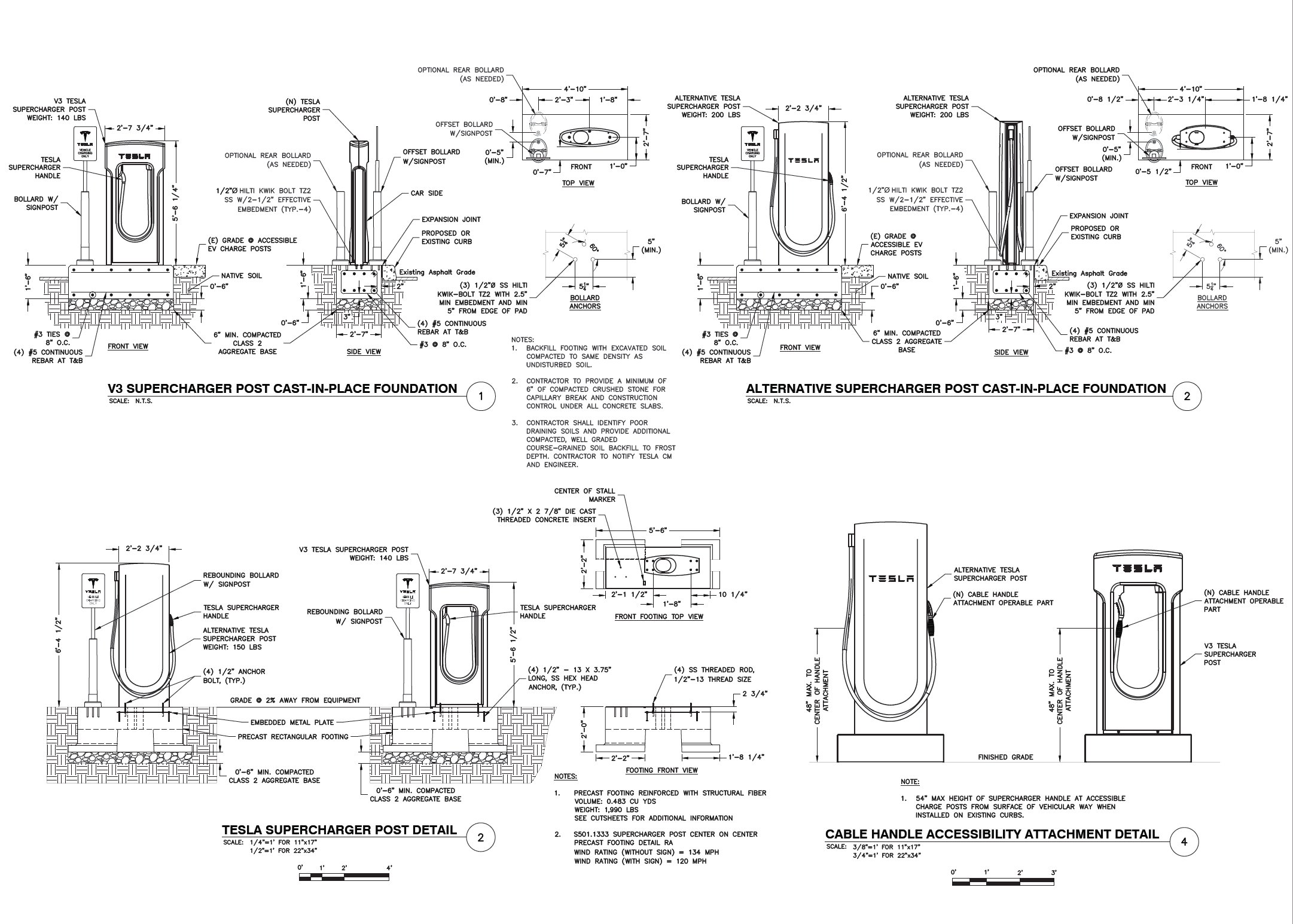 Tesla’s V4 Supercharger appeared in new project plans for a site in Danvers, Massachusetts, with a design that is strikingly similar to the company’s 72 kW Urban Supercharger. However, project details outlined in blueprints for the Danvers Supercharger seem to indicate this is Tesla’s next big development in its next-gen charging posts, but some questions still remain.

Tesla’s V4 Supercharger will, of course, succeed the 250 kW-capable V3 Superchargers that were released in 2019. The V3 Supercharger was an outrageous update and a huge development to the expedited process of charging Tesla’s EVs. Rates of up to 1,000 miles of range added per hour are capable with the V3 Superchargers, but they are also only available to Tesla vehicles, which is where the V4 may be coming into play.

Initially, the Alternative design in the blueprints is massive: 6′ 4.5″, weighing 200 pounds. That’s significantly larger than the Urban Supercharger, which is compact and perhaps only four feet or less in height. It towers over the V3 Supercharger design, which is also present in the blueprints and seems to be the project’s more-likely outfitting when it is complete (courtesy of @JH_Beford on Twitter).

The project design lacks any mention of potential CCS Support on the V4 Supercharger, which is what most people would expect moving forward from Tesla. The automaker has been utilizing a Pilot Program in Europe that allows other EV brands to utilize Supercharger stalls. This project is available in sixteen countries in Europe, and Tesla has made it clear that, eventually, the capability will be available in the United States. For now, it is too much of an advantage as Tesla continues to grow, and the company keeps it exclusive to Tesla vehicles in the U.S.

However, as we are already a month into the second half of 2022, it gives Tesla less time to roll out the “new Supercharger equipment that will enable non-Tesla EV drivers in North America to use Tesla Superchargers.” These quoted words come courtesy of the White House.

CCS Support may not be on these designs for several reasons, and it could be that Tesla simply hasn’t finalized a design for that Supercharger. Additionally, this could be an entirely different design altogether, and while it could be the V4 Supercharger, Tesla may not have plans to put CCS Support on the V4. That could perhaps be saved for another design.

Tesla is also likely to head toward a 350 kW charging rate, which is present in Electrify America chargers. These chargers are perfect for high-voltage vehicles as they can charge vehicles faster, and most importantly, the vehicles can support them. Their higher voltage architecture can stabilize the charging process for these higher-powered chargers. The Porsche Taycan has an 800v architecture, which enables faster charging, less weight, and high performance, all at lower temperatures.