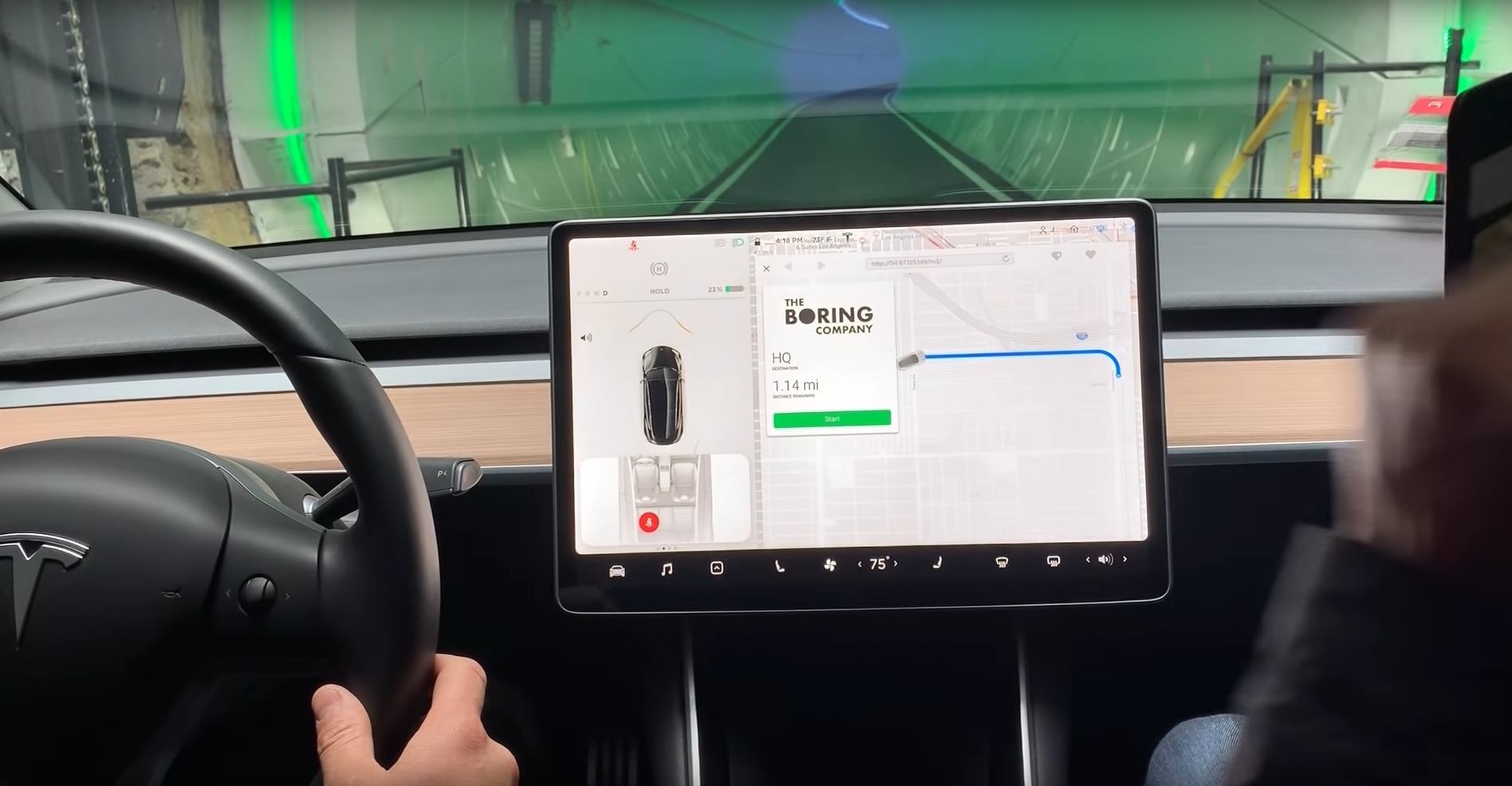 The Boring Company has been busy refining its tunnel technology since unveiling it last December, and a new video shared by venture capitalist and Tesla board member Steve Jurvetson has provided the best encapsulation of the experience yet.

In the video, a Boring Company team member is first seen transporting Jurvetson and another passenger in a Tesla Model 3 onto the system’s elevator entrance while discussing driver options during the journey. “We usually offer a slower ride on Autopilot or a fast ride [with] manual driving,” the driver explained. The group then sped through the tunnel, reaching a maximum 116 mph while crossing the underground distance from the corner of Prairie & 120th Street to the corner of Crenshaw & Rocket Rd in Hawthorne, CA. Total travel time between each of the the tunnel ends was about one minute.

The Model 3 driver also revealed upcoming self-driving options for future Boring tunnel transits. “Right now Autopilot goes up to 90 [mph], and we’re increasing it to 125,” he detailed. The group traveled using the manual driving option in the video, however. Alongside updates to driving options available, a button labeled “Request Departure” was added to initiate the tunnel journey via the all-electric midsize sedan’s touchscreen, and route information was displayed while underground.

Note: The original video referenced was removed from YouTube shortly after this article was published. Another version was uploaded to Twitter and is posted below.

Support for Boring tunnels will come in a future Tesla software update.

hurry up @elonmusk I want this pic.twitter.com/ZAoD7dcU0e

As seen in the last Boring update posted in May, the Model 3 in the travel demo was not using the vehicle skates present during the company’s opening party. The traffic-busting tunnel now appears to have a much smoother ride thanks to this change, something Boring Company founder Elon Musk previously explained as, “simple and just works.” This change and other subtle additions and modifications demonstrate both Musk’s and the company’s desire to continuously innovate their technology.

The Boring Company was created as a two-fold answer to frustrating traffic situations. First, it’s an alternative travel route that avoids above-ground congestion; and second, it lowers the cost of tunnel boring technology overall by using new design and engineering approaches to old digging machines. The venture’s one-mile demo tunnel was built for about $10 million dollars as compared to the $500-$1 billion dollars it traditionally costs to dig a tunnel of the same length. Notably, Jurvetson simultaneously shared a few photos of the tunnel boring machine being used for the company’s current projects with his video.

The latest iteration on the @BoringCompany masterplan to resolve soul deadening traffic. Did you know that a tunnel is just about the best terrestrial place to be in an earthquake? pic.twitter.com/foNznpdCG9

The short Hawthorne-based test tunnel isn’t the only transit project Musk’s underground venture has on its manifest. Last month, board members of the Las Vegas Convention and Visitors Authority approved a Boring Company contract to build two tunnels to transport passengers between locations under their convention center. Additionally, an environmental assessment was recently completed for a Boring-built tunnel between Washington DC and Baltimore, Maryland that will enable 15-minute trips between the two destinations. If approved, Hyperloop technology may also be compatible with the system, introducing travel speeds of over 600 mph.

Overall, The Boring Company continues its growth into yet another industry disruption that challenges the status quo. Smoother rides are definitely a step in the right direction, and Autopilot integration seems like a natural fit considering Tesla’s push towards autonomy and long-term vision.