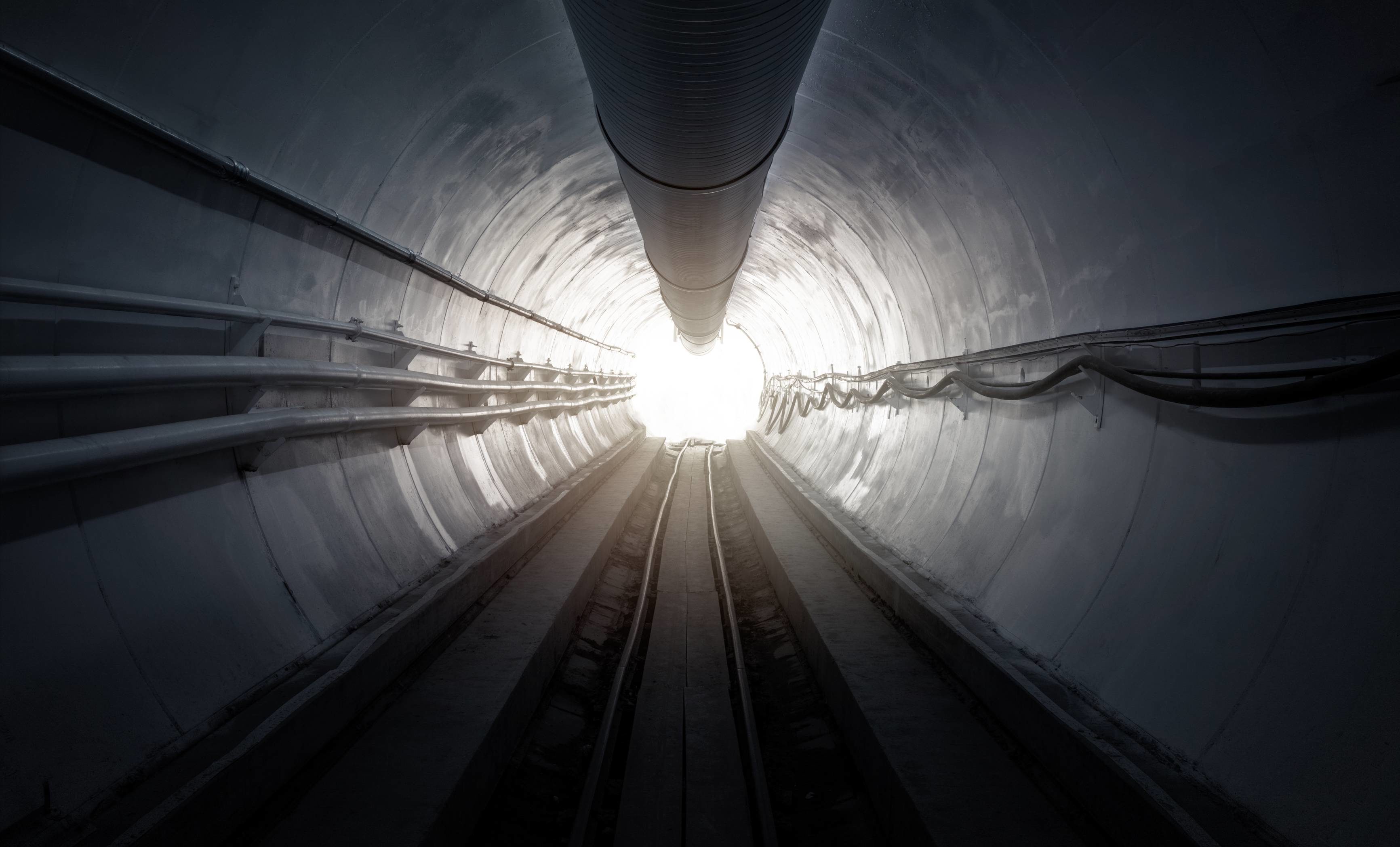 With The Boring Company, Elon Musk hopes to overcome the pitfalls that drive up the costs of underground rail transport construction using good old-fashioned innovation with a dash of Silicon Valley startup dust (dirt?). Currently, most U.S. local and state governments (i.e., tax payers) hand over an average of $200-$500 million dollars per mile to construct a subway system, with hundreds of millions more per mile a common occurrence and even a $1 billion dollars per mile price tag having happened a few times already. The reasons for such expense seems to be multi-faceted and stubborn: regulations, unions, and project management. So, when the Tesla CEO and Boring Company founder cited $10 million dollars as the final price of their mile-long demonstration tunnel, including internal infrastructure, lighting, comms/video, safety systems, ventilation, and tracks, he seemed to be threatening to completely upend yet another industry, this one having been at the core of transportation for nearly 200 years.

“I like trains, by the way. I really like trains a lot,” Musk assured his press audience at the company’s recent demonstration tunnel opening event. The Boring Company (TBC) began as a Twitter discussion wherein the tech mogul was venting about “soul-destroying” traffic in Los Angeles. A concept animation followed soon after (as well as hats and not-a-flamethrowers), imagining a transportation system where cars would be shuttled around at high speeds underground on electric skates. Ideas flowed, tunneling began, and the result of all those efforts went on display December 18, 2018, demo rides included. A rideable 1.14 mile tunnel had been constructed from Crenshaw Boulevard across from the Hawthorne, California headquarters of SpaceX, Musk’s private rocket company, to the 120th Street/Prairie Avenue crossroad of Hawthorne.

Around this time last year, Brian Rosenthal of the New York Times exposed several astonishing factors that added up to a $3.5 billion dollars per mile cost to construct a 3.5 mile tunnel to connect Grand Central Terminal to the Long Island Rail Road in New York City, aka the “East Side Access”. An infamous “first”, this price tag is 7 times more than the average of anywhere else in the world. A combination of trade union, construction company, and consulting firm practices, including significant staff redundancy, bred an environment ripe for cost pile-ups, and both incompetence and the lack of oversight within New York’s Metropolitan Transportation Authority (MTA) added significantly to the issue. While the specific amount of money spent made the system’s cost unique in the world, the general underlying issues were not uncommon.

New York may be an exception to the already high-cost of rail construction rule, but there’s the rub: It’s already incredibly expensive. As documented in numerous articles by Alon Levy, an independent journalist whose 2011 blog post on the topic inspired the research that eventually led to the Times piece, $100-$500 million dollars per mile is a typical cost for building railed transporation worldwide. “These are crazy numbers,” Musk exclaimed at the tunnel opening event after summarizing the multiple billions of dollars short tunneling projects cost to complete in L.A. and New York. If the building cost wasn’t enough sticker shock, it gets worse: The daily operating costs of rail systems in the U.S. exceed the amount earned.

Another metric that is used to estimate the true cost of rail construction is cost per rider. After the time and money is spent building a public rail system, it needs to be staffed and repaired, expenses which are difficult to match with revenue without a large number of riders. As cited by Alon Levy in an article Elon Musk tweeted recently, New York’s Second Avenue Subway will cost $25,000 per rider to complete 200,000 trips per day. In Los Angeles, the Purple Line will cost $45,000 per rider for 150,000 trips per day as will Boston’s Green Line Extension for 52,000 trips. Looking at rider fares, New York loses a bit less than $1 per ride taken and L.A. loses over $2 per ride.

So, how will The Boring Company “do” underground transportation system building better than the traditional, money-heavy methods? To put it simply: Be efficient.

They’ve designed their tunneling machines to bore faster and more efficiently. While the first generation machine is conventional and named Godot after the Samuel Backett play, Waiting for Godot due to the length of time it took to understand the machine’s functionality and assemble it, two other improved generations will be part of the Boring family.

The second generation machine, named “Line-Storm” after a Robert Frost love poem with the same phrase in its title that’s about overcoming hardships, is a conventional boring machine that has been highly modified. It uses a redesigned cutting head that takes in significantly more dirt and is 2 times faster than Godot.

During construction, TBC reinforced tunnel segments as they were dug, those reinforcements being created on-site out of materials comprising 70% of the dirt dug and the remaining 30% primarily cement. This recycled material, as-you-go system enabled quick construction with cost efficiency, the demo tunnel taking 2 years almost to the day from Musk’s initial Tweet that inspired the undertaking.

TBC’s tunnels are smaller than the typical underground rail system because they’re designed for specific types of vehicles that are smaller than traditional transports (autonomous electrics) and don’t require extra space for maintenance. This in itself reduces costs by 3-4 times.

Although The Boring Company has the advantage of being the new kid on the block whose founder has a unique background in shaking up traditional systems, there may still be a few hangups that will never quite go away. Anything involving the general public, especially public transit, will have serious bureaucracy involved. To achieve the company’s mile-long demo track feat, it had to face the extreme regulatory environment of Los Angeles. California overall has earthquakes, is a methane zone, and has oil and gas fields, all which add to a long list of rules to be followed for any construction projects to commence. “The amount of paperwork we had to go through to do this was enormous,” Musk said at TBC’s recent event.

Additionally, a lawsuit filed last year by the Brentwood Residents Coalition and the Sunset Coalition objecting to the company’s Sepulveda tunnel eventually led to their abandonment of that leg of the demonstration project. The coalitions primarily alleged that TBC was skirting environmental review requirements by “chopping large projects into smaller pieces that taken individually appear to have no significant environmental impacts”, citing a conceptual map the company released showing its planned Los Angeles tunnel system. Musk hasn’t let these hurdles damage his confidence, however. While speaking with press at TBC’s opening event, he added his own spin to the Broadway mantra (and Frank Sinatra hit, “New York, New York”) about “making it” there : “If you can build a tunnel in L.A., you can build it anywhere.”

As CEO of an innovative electric car company and a commercial rocket company set on sending humans to Mars, Musk is known as an industry disruptor. Even if the cost of boring tunnels for public transportation projects rises somewhat above the $10 million per mile price demonstrated with the LA/Hawthorne tunnel, it will be still be well under the typical costs in the boring industry. It’s obvious already that a potential disruption is underway. “We have people hounding us to invest nonstop…it’s kinda ridiculous how much interest we’ve had in investing in Boring Company,” Musk stated at the tunnel unveiling. Steve Davis, president of the company, added that they receive “greater than 5 and less than 20 requests per week from different municipalities and stakeholders.”

Also in the works for the tunneling newcomers: A transport line connecting downtown Chicago to Chicago O’Hare International Airport. The company won a contract to build a transport system for the city’s fliers in June 2017, and ground breaking is planned for sometime in the next few months. The Boring Company’s calendar still includes plans for an “urban loop system” as well, an underground network of pod-type buses for pedestrians and cyclists connecting numerous points throughout city centers.