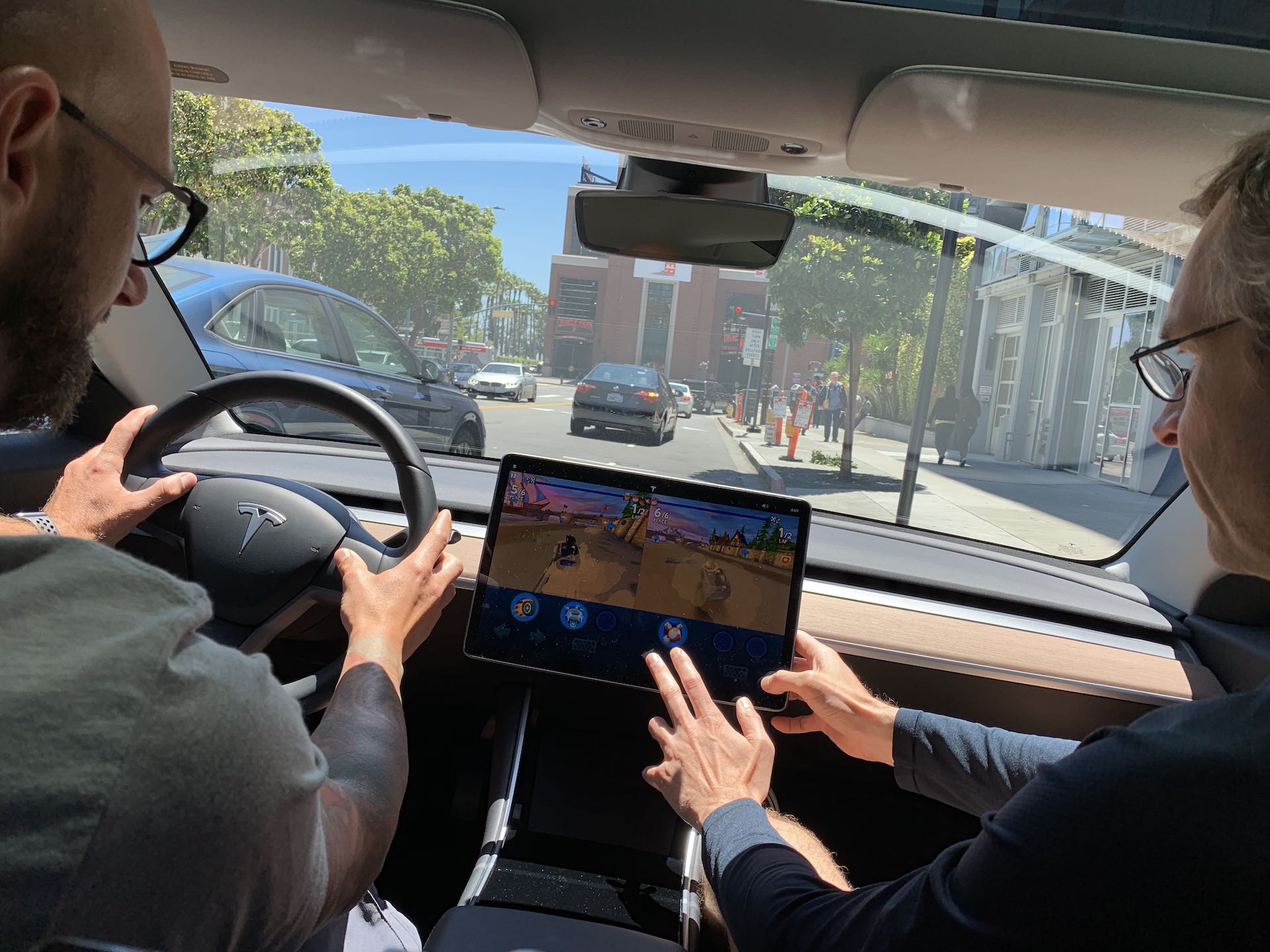 Tesla Arcade is priming us for the self-driving future, we just don’t know it yetS

This is a free excerpt of our weekly members-only newsletter. Each week, we give you our take on the biggest stories of the week, behind-the-scenes coverage, our favorite photos & videos, and much more. Join the family and become a member today!

A stone’s throw away from Giants stadium in downtown San Francisco parked an unassuming Midnight Silver Metallic Tesla Model 3, only this one was loaded with a real game-changer. Literally.

“Thanks for coming out to check out the latest Beach Buggy Racing 2,” said game developer and co-founder of Vector Unit, Ralf Knoesel, to Tom Cross and I who had just arrived to witness Tesla’s first foray into the billion-dollar global gaming industry.

“We’re really excited to show you guys what we’ve been working on,” a Tesla representative tells us, further explaining that the electric carmaker had been working with game studios like Vector Unit on developing fun and unique experiences for Tesla drivers and passengers alike. Experiences that would keep them entertained while they’re Supercharging or waiting in a car.

Sure, one can argue that there’s no replacement for the entertainment value that comes by way of Tesla’s in-car fart-on-demand app and its Classic Atari games, but they would be sorely mistaken.

Stay ahead of the curve and be the first to learn industry trends. Every week!

Follow along as our team gives you their take on the biggest stories of the week.

Tesla Arcade has taken the richness and interactive gameplay of traditional mobile apps and gaming consoles and made them available directly inside the vehicle.

Lightning bolt powerups? Check. Ability to unlock secret boss levels? Absolutely. And do this while challenging a passenger (or perhaps, one day, other outside players) in multi-player mode? F-yeah! It’s all there. And this can all be experienced in full surround sound with active feedback from the vehicle’s steering wheel which doubles as a gaming controller. Playing Tesla Arcade is akin to gaming in the world’s most realistic simulator. Well. Because it is.

This is going to be a game-changer. We went up against @vectorunit in a multi-player bout of Beach Buggy Racing 2 and got schooled – @_TomCross_ pic.twitter.com/6Qgt7QLkNi

40 minutes of gameplay whizzed by before we knew it. And that, my friend, is precisely what Tesla wants. You see, by zapping away time, the feeling of having to wait while charging your car becomes non-existent. More importantly, by creating an SDK that allows app developers to interface with the vehicle’s hardware, Tesla is planting the first seeds that will sprout an iTunes-like ecosystem to support our autonomous future. We just don’t know it yet.

If you think about it, it makes complete sense to have a rich library of apps and games inside a vehicle. This will especially be the case when self-driving cars become prevalent.

In a culture where human-to-human connections have given way to our digital overlords, having an extension of your life that includes your favorite video streaming platforms; your favorite business apps; and all of your favorite on-demand services (hi DoorDash, I’m looking at you) with you, while passing time during a commute inside a Tesla, feels like a no-brainer.

By the end of 2020, Elon Musk says Tesla owners will be able to add their vehicles to the company’s self-driving, ride-hailing “Robotaxi” network, which will enable Tesla and its vehicle owners to run a similar business model to Uber or Airbnb. Having entertainment will be paramount, filling the void of awkward conversations with strangers and enhancing the overall ride-sharing experience.

We’re at the cusp of a massive behavioral shift toward enhanced in-car lifestyles. Tesla’s opening of a gaming SDK that allows 3rd party developers to interface with the vehicle’s hardware is a pioneering moment for an entirely new industry that is about to awaken.

“Tesla, order a deep dish pizza from Zachary’s for home delivery at 7 pm.”

What do you think? Let’s chat in the comments below.

Tesla Arcade is priming us for the self-driving future, we just don’t know it yetS