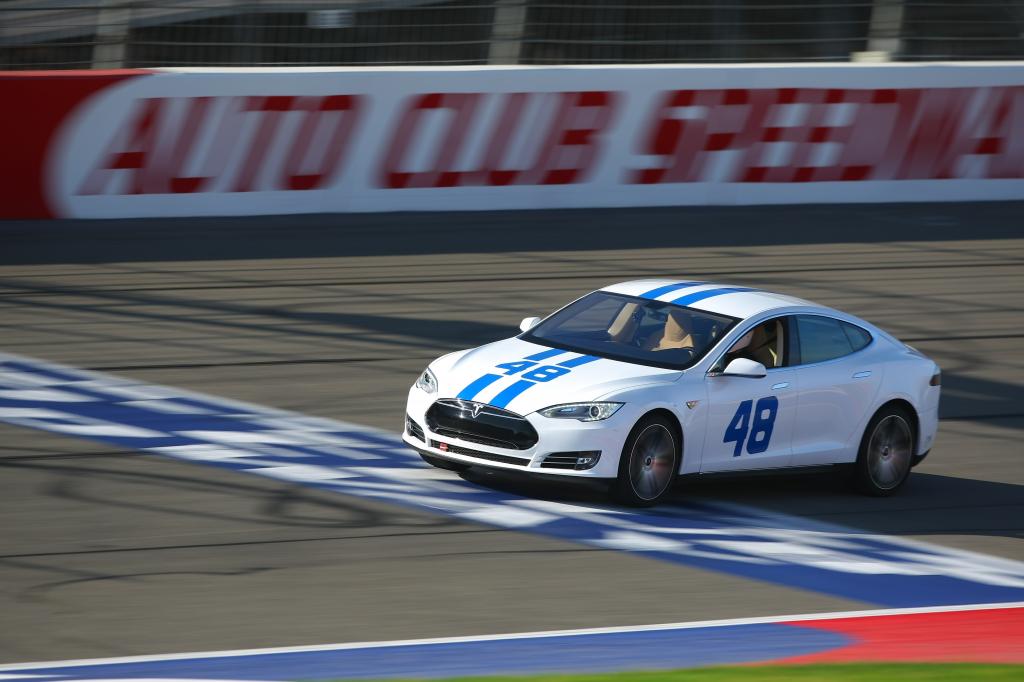 Fontana Auto Club Speedway, also known as the California Speedway, is a 2.8 mile D-shaped oval track, with infield, that’s hosted some of the most epic NASCAR and IndyCar battles.

This is a fast track that really tests the limits of the Tesla’s internal cooling system.  The Model S keeps pace with the best of them within the curvy infield portion of the track when speeds are below 100 mph. Once the Model S reaches the outer portion of the track and able to reach speeds up to 125 mph, the vehicle will begin to cut power presumably as a precautionary measure. The combination of high level acceleration and high speed would trigger the power limiting function right before the 1 minute mark.

As a result, we began to lose track position and lap time, and experienced lap time differences by as much as 10 seconds.

Despite the power limiting, the Model S is nothing short of being the ultimate sports car, but in a 4,600 lb, 4-door kind of way. It garnered the respect of nearly every class participant there, including a modified 600+ hp Nissan GTR R35 (a beast) that you can see us chasing through the infield, and a handful of track-ready Ferrari Scuderias.

This was a breathtaking experience for us to be able to drive on the same stadium track where the NASCAR series is held. The 14 degree banks were a thrill to drive and enabled us to pull 1 full lateral G at 105 mph into a turn. The sensation is exhilarating, but all the while a little voice in your head is constantly telling you that you must be crazy doing this. We can only begin to imagine what professional racers must experience as they whip through the track at near 200 mph speeds.

This track has walls which was a big concern to us. We began to experience a bit of tunnel vision as the serenity from the silent Model S left us in state of Zen. It was peaceful, it was tranquil, and it was dangerous. Any mistake here could result in a catastrophic date with a large retaining wall, a far departure from the dangers with spinning off track in a traditional road course.

A 10 lap session, equivalent to 28 miles of actual distance, consumed 130 miles of range. Not surprisingly this track consumed the largest amount of energy over all other road courses that we’ve tested on before, due to the sustained high speeds.

The track has 240V 50amp NEMA 14-50 outlets at nearly every parking space; all free to use. Charging in between sessions, we were able to complete 2 full sessions of racing with each full session being 10 laps.

The Hawthorne Supercharger is 60 miles away. One of the most fun tracks to race on because of the high speeds and banked turns, but a little too fast for the Model S. The rumored Autobahn upgrade of the Model S or any future performance enhancements, also rumored to be in testing by renown tuner, Saleen, would allow the Model S to be more competitive on a track of this caliber.