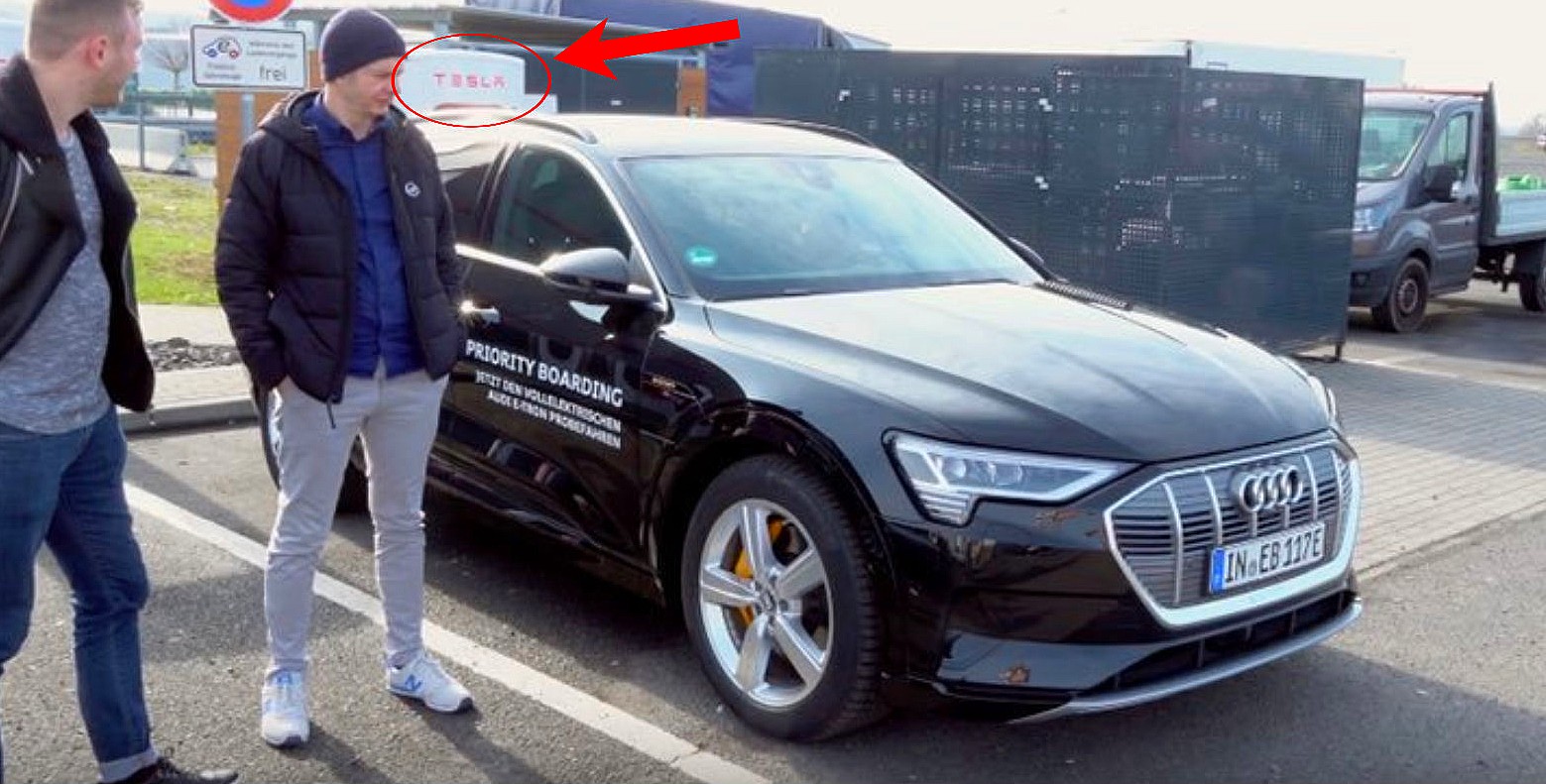 It appears that Audi is putting the pedal to the metal with its efforts at promoting its first all-electric SUV, the e-tron. One of these initiatives, which has been shared online, is notably bold, with the German carmaker bringing the e-tron over to Supercharger stations in what appears to be an attempt at persuading Tesla owners to shift to the 204-mile, five-seater SUV.

Reports from the electric car community in Germany have noted that Audi has been placing promotional merchandise at Tesla Club tables during exhibitions. Demo units of the e-tron are also being parked at select Supercharger stations. One promotional Audi e-tron unit was even photographed blocking a Supercharger stall, similar to how anti-EV drivers “ICE” an electric car charging station.

While forms of guerilla marketing are common, Audi’s strategy this time around is questionable at best. EV charging ethics aside, it would be unwise for Audi to promote the e-tron at Superchargers because the vehicle has subpar range compared to any of Tesla’s current offerings. With a 204-mile EPA rating, the e-tron has less range than a Model 3 Standard Plus, or even a 2012 Model S. Thus, by placing the e-tron at Superchargers, Audi could risk highlighting the e-tron’s range disadvantage to potential customers.

Apart from this, Audi does not have its own charging infrastructure. The e-tron is capable of rapid charging, but the vehicle relies on third-party solutions for long-distance travel. Tesla’s Supercharger Network, on the other hand, has expanded to such a degree that long trips are practically effortless. Audi’s marketing team then has a very challenging task: persuading Tesla owners to abandon the Supercharger Network for something inferior.

Apart from occupying Tesla Superchargers, reports from the electric car community in Germany have also noted that Audi has been calling Tesla owners and former Audi drivers to offer them an extended test drive with the e-tron for two days including 1,000 km (620 miles). What is rather interesting is that customers who accept Audi’s offer are reportedly asked if they would be willing to give comments about their experience in the all-electric vehicle. Audi is reportedly also asking if they could send over a photographer to document the test drive as well.

In a way, it is unfortunate to see Audi adopt such tactics to promote the e-tron to potential customers. Being an all-electric car, after all, Audi’s goal with the SUV must be to reduce the number of gas and diesel-powered vehicles on the road. The company would not be able to do this if it just focuses its efforts at Tesla drivers, who are already driving all-electric cars. That simply misses the whole point of the EV transition.

And that’s a shame. Apart from its subpar range and unexciting acceleration (or as Consumer Reports calls it, a “more elegant pull-away”), the e-tron is not a bad electric vehicle by any means. It’s vault-like quiet inside, and it has a luxurious interior that would likely be enough to encourage die-hard traditional car fans to consider shifting to electric. There’s a portion of the car buying public that will never consider Tesla due to a myriad of reasons, and that’s exactly the demographic where the e-tron could dominate. Unfortunately, Audi doesn’t seem to have its sights set on the right target just yet.