German electric vehicle rental company nextmove recently conducted what could only be described as the ultimate Autobahn efficiency and range test, pitting the Tesla Model S, 3, and X against the upstart Audi e-tron and the bang-for-your-buck Hyundai Kona Electric. Following the EV rental firm’s test, it was evident that veteran automakers such as Audi still have a long way to go before they catch up to Tesla’s experience in electric cars.

Several rules were observed to keep the Autobahn test as controlled as possible. Cruise control was only utilized once the target cruising speed of 130 kph (81 mph) and 150 kph (93 mph) was reached. Features such as Regenerative Braking were also avoided, and heating was largely disabled. Thet route was 85 km (52.8 miles) long, with the vehicles traveling 130 kph one way and 150 kph in the other. 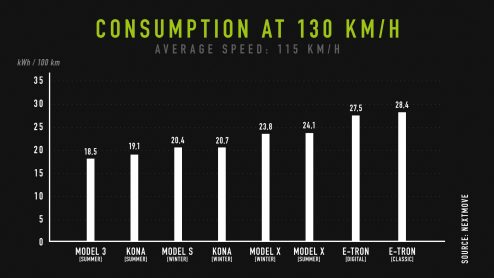 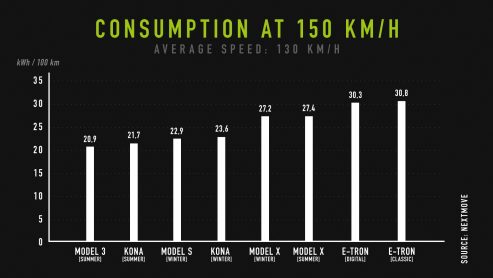 The Audi e-tron and the Tesla Model X had already gone head-to-head in a nextmove test in the past. During the previous test, the EV rental company utilized a pre-production version of the Audi e-tron, and it proved to be the electric equivalent of a gas-guzzler, being 23% less efficient than the larger, heavier Tesla Model X.

While the Audi e-tron performed much better against the Tesla Model X than its pre-production counterpart in the recent test, the all-electric SUV still proved less efficient than the Silicon Valley-made crossover. Quite interestingly, the difference in energy consumption between the Tesla Model X and Audi e-tron was more prominent at lower speeds than at higher speeds.

The results of the 150 kph test were quite similar. The Model S, X and 3 proved superior once more with a range of 428 km (265 miles), 359 km (223 miles), and 358 km (222 miles). The Hyundai Kona Electric managed 283 km (176 miles), while the Audi e-tron achieved a range of 275 km (171 miles). With these results in mind, it appears that veteran automakers such as Audi still have their work cut out for them in terms of designing electric vehicles that offer a balance of power, efficiency, and range. 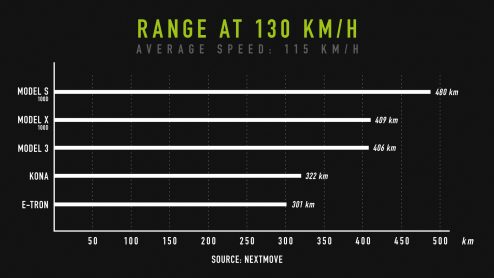 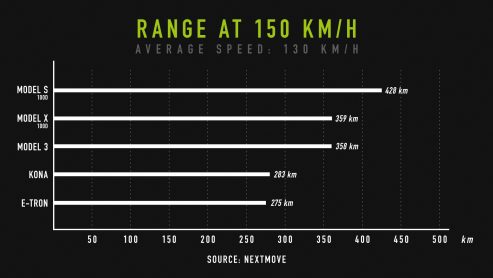 It should be noted that the Tesla Model X utilized by nextmove in its Autobahn efficiency test was a 100D unit, and thus, the vehicle was not yet equipped with the company’s updated high-efficiency drive units. With a “Raven” Model S and Model X in the equation, the German EV rental company’s test could very well have ended in a far more lopsided manner.

The full results of nextmove‘s eight-way comparative test could be accessed here.

Watch nextmove’s Autobahn efficiency test in the video below. English subtitles are available.