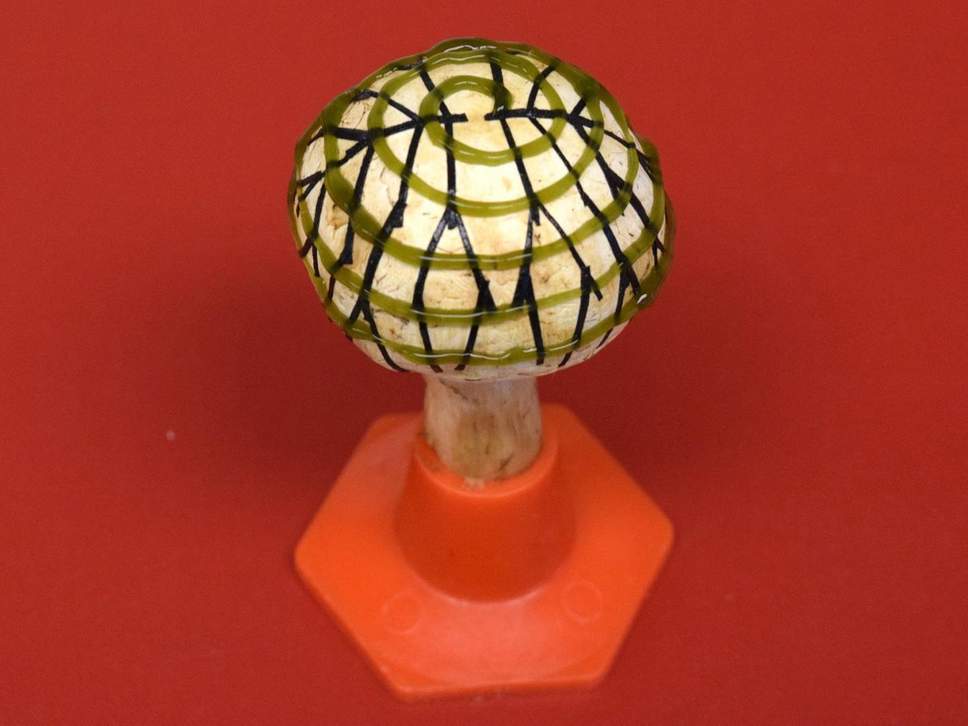 A mushroom has been turned into a renewable energy generator using 3D printed materials and bacteria. In a paper published by the journal Nano Letters, scientists from the Stevens Institute of Technology in Hoboken, New Jersey detailed their experiment wherein strands of graphene were intertwined with cyanobacterial cells on a mushroom cap to capture 65 nanoamps of power. While this amount of power is a fraction of what would be needed to power even an LED, the initial results are promising for further development as a source of renewable energy.

Cyanobacteria, more commonly known as “blue-green algae”, are aquatic, photosynthetic bacteria that have been around for about 3.5 billion years. In addition to the energy produced by photosynthesis, cyanobacteria also produce oxygen, and their ancient ancestors are credited with producing the original oxygen in our atmosphere. These bacteria are further responsible for the origin of plants – the chloroplasts that enable photosynthesis are actually cyanobacterium living in plant cells.

When these bacteria photosynthesize, a fraction of the electrons resulting from the process are released into the surrounding environment. This process of light-induced electric current, termed “photocurrent”, is not very efficient in nature. However, the scientists in this experiment designed a 3D-printable mixture with the bacteria which made the distribution of cells more efficient for photocurrent generation and collection. After being printed onto a mushroom cap, the photocurrent produced was eight times greater than what is produced naturally.

Graphene is a semimetal form of carbon with electrical conductivity and a very thin size. In fact, it’s one of the thinnest materials ever produced. Due to these properties, it was chosen as the base of the 3D printed ink to collect the electricity from the cyanobacteria placed on the mushroom cap. Mushrooms were chosen first to provide a surface and nutrients for the cyanobacteria to grow, and second, they enabled the bacteria to last several days longer compared to other bases and materials.

By accessing and augmenting the unique properties of both the bacteria and nanomaterials (graphene), the scientists in this study have created a new functional bio-hybrid system. With their proof-of-concept “bionic” mushroom, they are hopeful their research can be used to expand to include more bio-hybrid applications. The bacteria themselves have several other properties which can be integrated for purposes such as glowing identification tags for medical use, toxin sensing, and fuel production.

The Future is Now

Cyanobacteria are already being used for other “green” projects besides energy generation, namely in removing CO2 from the air as a result of manufacturing. In one prominent example, Lennaeus University in Sweden has created a system of pushing gases produced in cement production through water bags full of cyanobacteria called the Algoland project. Through this process, nearly all of the CO2 is scrubbed from the emissions using the bacteria’s natural photosynthesis. Other natural limitations of the bacteria are being addressed by projects using techniques such as gene editing for more efficient CO2 conversion and rate of growth.