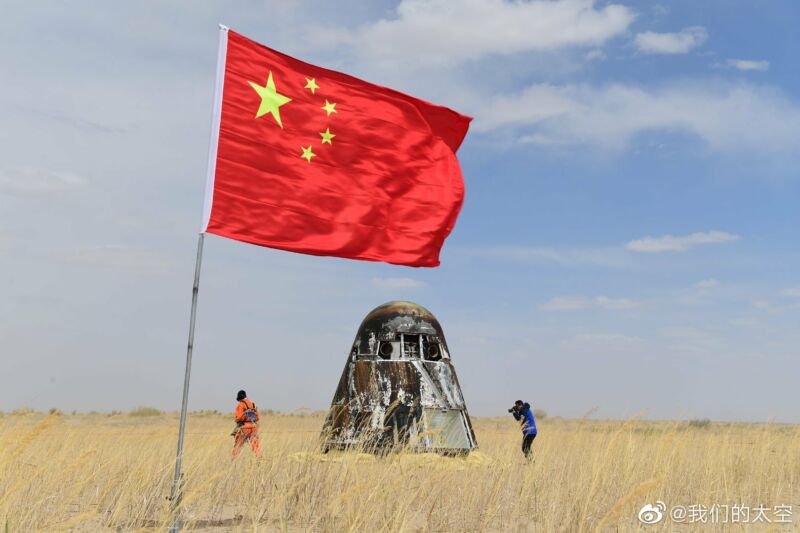 China’s new uncrewed spacecraft successfully landed back on Earth on Friday, May 8, following a three-day mission. It touched down intact with the help of a trio of parachutes, making landfall in the Chinese desert at 1:49 a.m. ET (0549 UTC). The Chinese space agency released photos soon after that showed a spacecraft resembling a toasty marshmallow.

If you think have you deja vu while looking at this image, you’re not wrong. The new Chinese spacecraft resembles another spacecraft that is soon to carry its first crew of astronauts into space. That’s right; it looks similar to SpaceX’s Dragon capsule.

The mission is one of the first steps the Chinese are taking to prepare for future lunar missions. The spacecraft launched atop a Long March 5B — China’s most powerful rocket. During the test, the spacecraft soared to an altitude of nearly 5,000 miles above the Earth. The trial, which was similar to the initial flight test of Orion that NASA completed in late 2014, was heralded as a success.

China has not revealed any detailed plans for its deep space ambitions, but we do have a rough idea of what the country and its space program hope to achieve. With the help of the Long March 5B, China aims to build its space station in low-Earth orbit sometime in the new few years.

It’s been rumored that this new spacecraft will probably play some sort of role in the development and maintenance of this future space station.

China also has big plans for the moon and even Mars. The China Aerospace and Technology Corp is building an even larger Dragon-like spacecraft that could one day transport taikonauts (Chinese astronauts) to the moon. Chinese officials have expressed their desires to build a lunar outpost in the future as well as eventually send humans on to Mars.

The country made history in 2019 when it became the first to land a rover on the far side of the moon. Ever since the Chang’e 4 lander along with its Yutu 2 rover have been beaming back incredible photos of the lunar surface as well as taking scientific measurements.

But China’s lunar plans do not stop there. Although specific details and dates are scarce, the country has mentioned the notion of  lunar landing sometime in the 2030s.

If all goes as planned, this summer, NASA will not be the only space agency sending a rover to Mars. The UAE also has plans to send a spacecraft to the red planet. The Hope spacecraft will launch from Japan this summer and spend two years studying the Martian atmosphere.

NASA’s Perseverance Mars rover will also launch in July and is expected to touch down on the red planet’s surface in Feb. 2021,it a region is known as Jezero Crater. Once it arrives, it will search for signs of past life, while collecting samples of Martian rock and soil to send back to Earth at a later time.

China is also expected to launch a spacecraft to Mars this summer. The Chinese space agency recently revealed that this mission would be called “Tianwen 1,”  which means the quest for heavenly truth. To date, only the U.S. and the former Soviet Union have landed spacecraft on Mars. However, both the European Space Agency and the Indian Space Research Organization (ISRO) have operational spacecraft orbiting the red planet.

The Chinese spacecraft will consist of three parts: an orbiter, a stationary lander, and a six-wheeled rover. Together the trio will study the Martian atmosphere, analyze the regolith and rocks, as well as try to better understand the Martian environment as a whole.