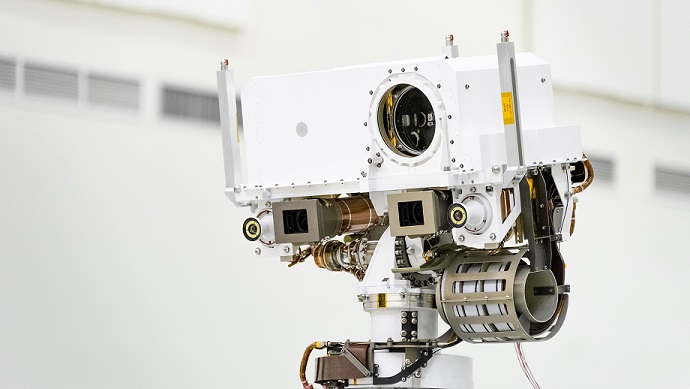 The Mars Perseverance rover is almost ready for its July launch. Credit: NASA

NASA engineers are busy preparing the agency’s next Mars rover for its upcoming journey to the red planet. The six-wheeled robot will scour the Martian surface to look for signs of life. Deemed essential by NASA’s administrator, the mission is progressing as planned in order to meet a July launch.

The Perseverance Mars rover will land on Mars in February 2021, touching down in an ancient river bed called Jezero Crater. The 28-mile-wide crater is the site of an ancient river delta, and as such, scientists believe it could harbor fossilized life. That’s because the region is home to mineral deposits like hydrated silica, which is a preservative material here on Earth.

To help it search out key mineral deposits, the rover is packing a suite of scientific instruments, including some specialized cameras. The rover was built at NASA’s Jet Propulsion Laboratory in California but was shipped to its Florida launch site earlier this year.

Since its arrival, engineers have begun reassembling the rover and preparing it for flight. It will not be flying solo to the red planet, but instead, will be accompanied by the first interplanetary helicopter. Approximately the size of a softball, the Mars helicopter has passed pre-launch testing and was recently installed on the belly of the rover.

The rover, however, still has a few more milestones to complete before its ready to be tucked into its aeroshell and loaded into the launch vehicle. To that end, the rover recently had its vision tested.

Perseverance is packing multiple cameras that have a range of imaging capabilities from wide-angle cameras capable of capturing sweeping vistas to a narrow-angle, high-resolution camera capable of zooming in on details on the Martian surface.

The rover will use the SuperCam (along with its laser and spectrometers) to examine Martian rocks and soil, looking for organic compounds that could indicate past life on Mars.

So how does one test a rover’s vision? With a giant grid of dots.

The rover’s vision was first tested back in July 2019 at the Jet Propulsion Lab and then rechecked once the cameras were installed at NASA’s Kennedy Space Center in Florida. The rover’s main camera, called the SuperCam, is installed on the rover’s head. It appears as a large circular opening, and this is the lens. Underneath it are two grey boxes that are two Mastcam-Z-imagers, and on the outside of those boxes are two more cameras used for navigation.

“We completed the machine-vision calibration of the forward-facing cameras on the rover,” Justin Maki, chief engineer for imaging and the imaging scientist for Mars 2020 at JPL, said during the test. “This measurement is critical for accurate stereo vision, which is an important capability of the vehicle.”

To calibrate the imagers, target boards that feature grids of dots were imaged and placed at distances ranging from 1 to 44 yards (1 to 40 meters) away. Those boards were used to confirm that the cameras meet the project’s requirements for resolution and geometric accuracy.

“We tested every camera on the front of the rover chassis and also those mounted on the mast,” Maki said. “Characterizing the geometric alignment of all these images is important for driving the vehicle on Mars, operating the robotic arm, and accurately targeting the rover’s laser.”

But the work isn’t done yet, the imagers on Perseverance’s body and arm will happen in the coming weeks.