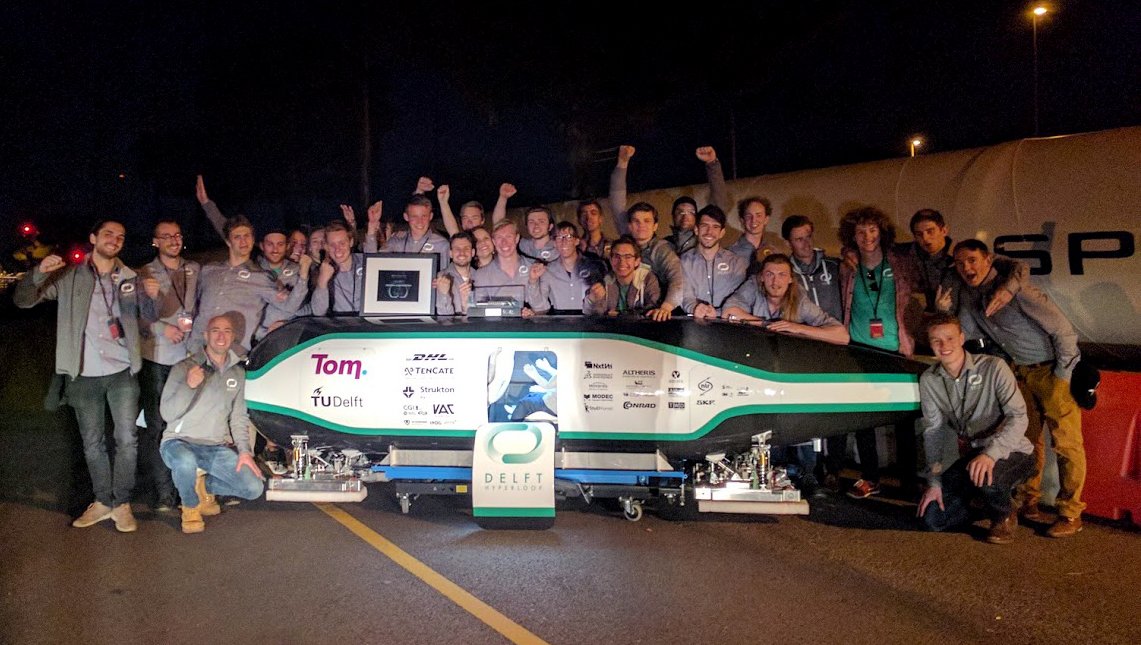 The Hyperloop competition at SpaceX headquarters is complete and the winners have been announced. First place went to the Delft Hyperloop team from  Delft University in the Netherlands. That should come as no surprise, as Delft University has a history of excellence when it comes to international transportation competition. Its entries in the European Formula Student competition for electric race cars have consistently taken top honors. Its Hyperloop prototype garnered the most total points as awarded by SpaceX engineers.

Second place went to the team from the Technical University of Munich (TUM), another top European engineering school. Its entry proved to be the fastest of all in the competition. A team from MIT placed third. All awards were 3D printed, using the same printer SpaceX uses for printing rocket components, and signed personally by Elon Musk.

Here’s a list of all the award winners among all thirty teams that participated in this weekend’s events:

According to SpaceX, “The purpose of the competition is to help accelerate the development of a functional Hyperloop prototype and encourage student innovation by challenging university students to design and build the best Hyperloop pod.” SpaceX Hyperloop competitions began in 2015. In 2016, SpaceX selected 30 teams to participate this weekend after they passed the design phase of the competition.

This past weekend marked the first time the contestants were permitted access to SpaceX’s mile long test track. In the end, only three teams passed all preliminary rounds of judging, during which the entries were subject to a  battery of tests, including a structural analysis and a vacuum chamber test.

Musk told participants that the Hyperloop competition was intended to spur innovation in the field of transportation and to “explore the boundaries of physics”. Musk would go on to reveal his plans to embark on a tunnel digging project meant to serve as an experiment that could lead to vast improvements in digging speed and future infrastructure for the Hyperloop transportation system.

The final phase of the Hyperloop competition will take place this summer though an exact date has yet to be specified. Teams that brought entries to this weekend’s competition but were not allowed to test their designs in the SpaceX test track will be allowed into the final round if they make appropriate modifications based on the test results from this weekend.