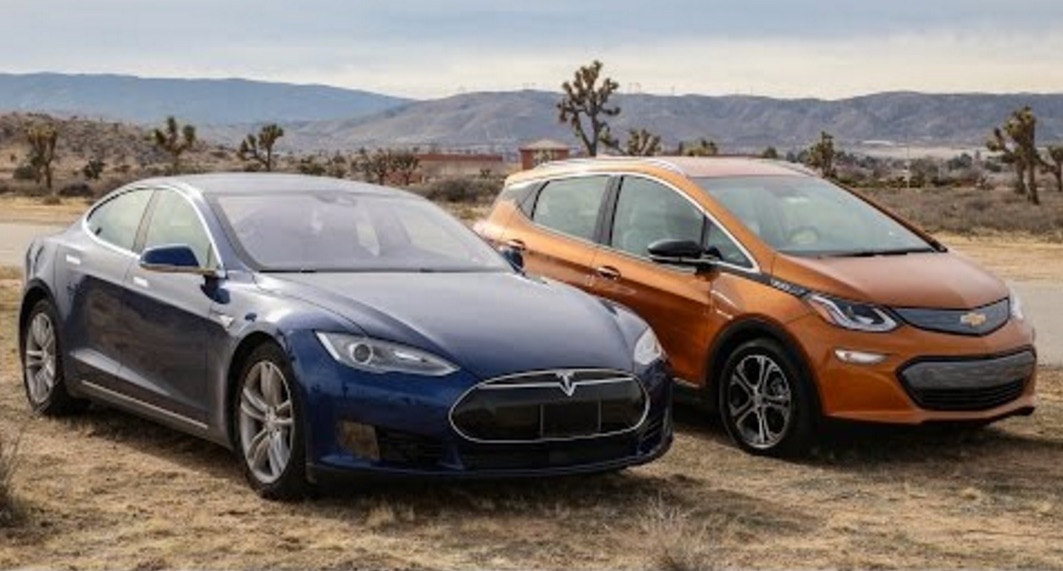 Southern California Tesla Model S owner Alex Venz was recently given 24-hour access to a Chevy Bolt with the stipulation that he not drive it more than 100 miles. After his time with the car was up, Alex put together a lengthy video that explores the Bolt and highlights some of its pluses and minuses.

For starters, Alex found the Bolt was somewhat smaller than the Nissan LEAF he used to own. He calls it larger than a Ford Fiesta but smaller than a Ford Focus. His first impression is that the seats are somewhat narrow. In fact, they measure about 17 inches wide. A quick check on his Model S finds those seats are about 20 inches wide, as are the seats in a Honda Accord he had access to. So the Bolt is a little tight when it comes to hip room.

Head room is another story. The Bolt has more front and rear head room than the Model S. Venz, who says he is 5′ 9″ finds he has almost no headroom in the back seat of his Model S but about 3 inches of clearance in the Bolt. Front headroom in the Bolt is about double what he has in his Model S.

Luggage capacity is also significantly greater in the Tesla. The Bolt can handle three moderate size carry on bags, but with little to no room left over. The rear seats of the Bolt do fold flat, however. Lenz says there’s not enough room to actually lie down in back with the seats folded, but there is enough room for lots of cargo if the rear seats aren’t needed for passengers.

The Bolt takes about 2 seconds more to get to 60 mph than Lenz’s Model S 70 but the time required is still around 7 seconds, which is fairly quick in comparison to most in-category cars with internal combustion engines. The quality of interior materials is adequate, Lenz finds, and he notes that the Bolt has fewer squeaks and rattles than his Model S.

Checking out the car’s controls, Venz found the Bolt comes up short when it comes to ease of operation. The touchscreen is customizable, but requires far more effort to drill down through the available menus than the Tesla does. The Bolt also has no built in navigation function for route planning or finding charging locations. Instead, Bolt drivers will have to rely on apps or the mapping functions provided by Apple Car Play or Android Auto. Neither map program is as fully featured as what Tesla offers.

Venz notes that CCS quick charging is a $750 option. Without it, the Bolt can only be charged at either 8 or 12 amps from a household outlet, or roughly 3 miles of range per hour of charge. Just as with the Chevy Volt, 8 amps is the default setting. The driver must manually select the 12 amp setting every time, which is tedious. The car also is programmed to do a 100% charge every time. There is no way to select a lesser charging level.

Update: In the comments to this post, several people took issue with Venz’s information on charging. This comes from GreenMonkeyPants: “Untrue. without the CSS option, there’s a standard J1772 that will charge at 32A @240V.” Further information may be obtained from the website Chevy EV Life.

The ride and handling of the Bolt are described as good. The car is responsive and nimble in a way the Model S, being considerably larger, is not. Venz does praise the regenerative braking feature built into the Bolt, which he says permits one pedal driving. The regen is available even with a full battery and can be boosted with a paddle mounted low and on the left side of the steering wheel.

Venz’s conclusion is that the Bolt is an excellent car for someone who will use it primarily for commuting. It has more than adequate range for most people, it is comfortable, and fun to drive. The seating position is higher than in the Model S and is more like what a driver would expect in a crossover SUV than a sedan. That’s a big plus for a lot of drivers.

On balance, Venz feels the Bolt is one of the best products to come from Chevrolet in quite some time. Comparing prices and functions with the Model S, the Bolt is a good car for the money and may actually be better suited to the way ordinary people drive on a daily basis than the Model S.

That’s not the whole story, of course. The real test will be how the Chevy Bolt stacks up against the Model 3. Most people expect the Tesla midsize car to be more refined and offer a higher level of technology than the Bolt. The Chevrolet product has lane keeping assist, blind spot warnings, and automatic emergency braking available but nothing similar to the Autosteer or TACC features available in the Tesla. The Model 3 will be capable of full autonomous driving; the Bolt is not. It will be interesting to see how the two cars compare when both are available to consumers.