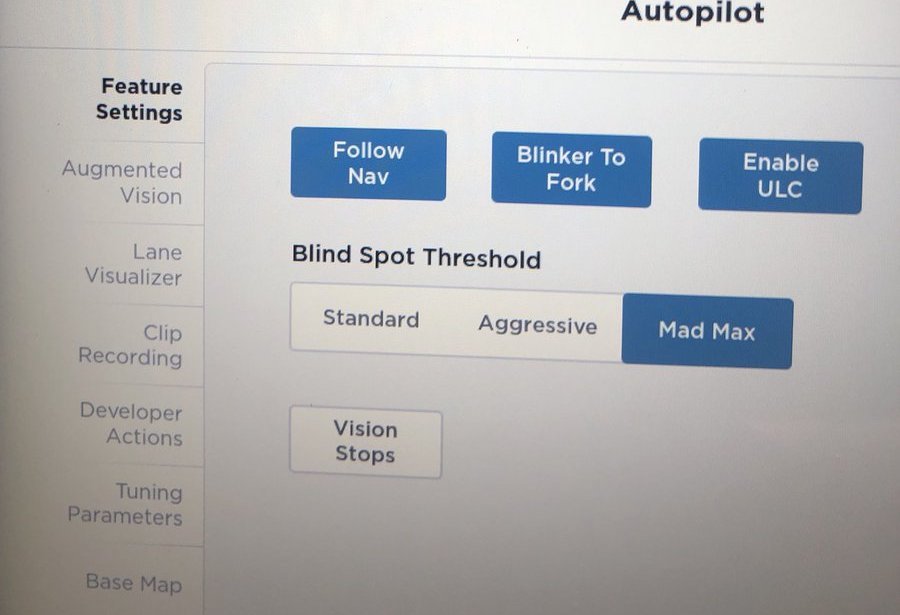 Elon Musk recently provided a rare glimpse of what appears to be some Full Self-Driving features being tested in Autopilot’s developer version, including a lane change aggressiveness setting that goes all the way up to “Mad Max” mode.

Musk’s shared image came as a response to a photo that jokingly placed the Tesla Semi in the world of Mad Max, a movie franchise set in a dystopian future. Responding to the image, the billionaire entrepreneur stated that a “Mad Max” option literally exists on Autopilot’s developer build. As could be seen in the recently uploaded picture, the Mad Max mode is a setting that determines how aggressive the vehicle would be when it changes lanes. In a follow-up tweet, Musk joked that Tesla was thinking of adding an “LA Freeway” mode, but such an option would have been “too loco.”

Musk did state, however, that it’s a “tough call” to decide which of the features in the developer build would ultimately make it to customers’ vehicles, considering that self-driving cars always yield to other vehicles, making them prone to bullying on the road. Musk noted, however, that Tesla would probably feature a manual override for instances when a “continuous press for hardcore lane changes” is required.

Apart from the Mad Max mode, Autopilot’s developer build also includes new features, including “Follow Nav,” “Blinker to Fork,” “Enable ULC,” and “Vision Stops.” Musk didn’t discuss these features in his tweets yet, but Follow Nav appears to suggest that the vehicle would automatically follow the routes outlined in Tesla’s navigation system. Blinker to Fork, on the other hand, could pertain to a feature that would allow drivers to select which exit to take by engaging the vehicle’s turn signals, similar to how the current iteration of Autopilot uses the blinkers to initiate a lane change. Enable ULC could refer to Unassisted Lane Change, which would allow vehicles to change lanes without engaging the turn signal. Lastly, Vision Stops could be related to Autopilot’s ability to read road signs and traffic lights, allowing the electric car to follow stop signs as necessary when driving on city roads.

Other options in Autopilot’s developer build that stood out are Clip Recording and Augmented Vision, both of which could refer to features specifically teased by Musk in the past. Clip recording, for one, could be related to the Dashcam feature that the Tesla CEO teased on Twitter before. Augmented Vision, on the other hand, used to feature views from the vehicle’s cameras overlaid with what the car’s software sees. With Tesla set to roll out an Augmented Mode for the next-generation Roadster, however, it is quite encouraging to see that Tesla is already starting to touch on the development of Augmented Reality technology.

Tesla is set to debut the first features of its Full Self Driving suite on August, around the same time as the release of Software Version 9. Looking at the options teased in Musk’s recent tweet, Tesla could release some of the features in the developer build as the first capabilities of its Full Self-Driving suite. Unassisted Lane Changes (assuming that this is what ULC means, of course), for one, would only require a refinement of the current iteration of Autopilot. Vision Stops, provided that it does refer to the vehicles’ capability to read road signs, could also make it as one of Tesla’s first Full Self Driving abilities, since the feature relies on Tesla’s continuously-learning neural network.