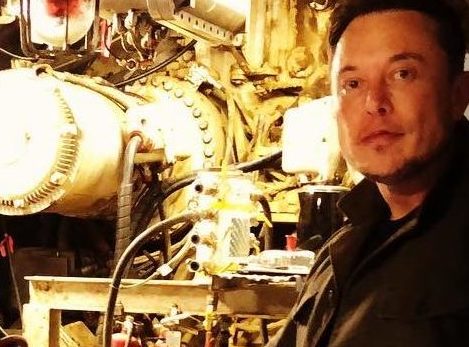 Elon Musk recently expressed his affection towards The Boring Co.’s TBM on social media, posing beside his tunnel-making machine and captioning his post with a line from musician Dan Hill’s 1970’s classic soft rock song, “Sometimes When We Touch.”

The SpaceX and Tesla CEO posted the lighthearted image early Saturday on his Instagram page. According to Musk, the photograph was taken inside a hole that The Boring Co. was currently digging. Using some classic Elon Musk humor, the serial tech entrepreneur used the lyrics of Dan Hill’s smash hit to describe his feelings towards the tunnel boring machine.

“Deep in the hole with my boring machine. Sometimes when we touch, the honesty’s too much…”

Based on the image that Musk shared, it seems like the billionaire visionary was standing at the rear of one of The Boring Co.’s TBMs. The components of the machine at the left side of the photo, for one, look very similar to screw conveyors commonly found in tunnel boring machines. Screw conveyors are the component of industrial-grade diggers that transport extracted rocks and dirt from the machine’s cutter head to its rear, as noted in a RailSystem.net report.

Deep in the hole with my boring machine. Sometimes when we touch, the honesty’s too much …

Cheesy 1970’s soft rock songs aside, Elon Musk’s latest social media post about The Boring Company all but shows that the SpaceX and Tesla CEO is actively pursuing his vision of alleviating traffic on America’s roads through the use of underground tunnel systems. According to Musk, these tunnels could carry vehicles and Hyperloop pods from one designated point to another at speeds of up to 124 mph through the use of electric skates.

The Boring Company’s tunnels are quite unique in the way that they are designed to be smaller and more efficient than the usual tunnels dug by traditional tunnel boring machines. According to the tunneling startup’s official website, the tunnels it would dig will measure roughly 14 feet in diameter, vastly smaller than the usual 28 feet that conventional industrial-grade diggers create.

Due to the smaller tunnel size, the Boring Company would also be able to complete its operations at a more affordable price. Currently, the average price of tunnels dug by TBMs is roughly $1 billion per mile. Considering that its tunnels are up to 50% smaller, The Boring Co. expects to cut the costs of tunneling by a factor of four.

Apart from making tunneling cheaper, the Boring Company also aims to make the creation of tunnels more efficient. As we noted in a previous report, The Boring Co. is aiming to increase its tunneling machine’s power by upgrading the diggers’ cooling systems and changing their diesel motors to electric. Upgrades for the TBMs are also planned, which would enable the digger to erect tunnel support structures as the machine continues to dig.

As we noted in a previous report, the Boring Company recently received an early excavation permit from the local D.C. government to start digging at Lot 53 New York Avenue in Washington, D.C., a location that could become the first station in Elon Musk’s proposed NY-Phil-Balt-D.C. Hyperloop system.