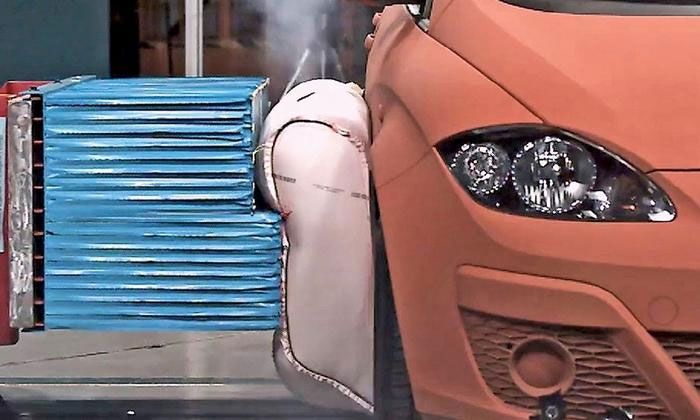 Internal airbags are a standard safety feature in today’s cars, but a German auto supplier is hoping to export their benefits to the exterior of vehicles as well. ZF Friedrichshafen AG’s external vehicle airbags look and function exactly as you’d expect them to – after sensing the approach of a collision event, the bags deploy in milliseconds to cushion the blow. They boast a 40% reduction in injury levels, but after ten years in development, ZF’s system still faces significant hurdles before ever being brought to the consumer market. Convincing auto manufacturers to incorporate their product into newly-built vehicles and overcoming regulatory issues are the primary obstacles to overcome, but ZF is confident that the advantages external airbags would provide to consumers will win the day for their product.

The primary advantage of external vehicle airbags is the disbursement of impact forces. Rather than concentrating the energy of a crash in the area that’s hit, the force would be sent along the full length of the airbag, specifically along the side of the vehicle, per ZF Friedrichshafen AG’s design. The company’s airbags are installed into the outside bodywork of a vehicle under the doors and run the full length of all doors. Additionally, thanks to the electronics and software safety suites already installed in most new vehicles today, the triggering mechanisms needed for external airbags are already incorporated into vehicles that ZF hopes to include its product in. LIDAR, laser-light radar, is the preferred sensor system for the airbag deployment as the quickest way to detect and respond to incoming threats.

Unfortunately, due to the space required in key areas of a vehicle and the integration into existing onboard sensor systems, installation of ZF’s external airbags would need to happen at the time of manufacture. This engineering demand is a significant commitment from car makers to utilize the technology. However, ZF claims its airbag product would reduce intrusions into the car cabin up to 30% as well as nearly halving the significance of injury levels. As stated in a press release on the product, “Tests have shown it can help reduce the occupant injury severity up to 40 percent.” Those stats alone might make the product worth the effort. The company also has an existing line of airbag products further making a case for its newest airbag product’s safety claims.

ZF Friedrichshafen AG was founded in 1915 and is a company dedicated to overall vehicle safety, not just to improvements made in their one external airbag product. As an international company with an American headquarters in Michigan, ZF has its products incorporated into numerous vehicle makes and models, including transmissions, control units, and sensor systems. As an interesting note, ZF’s products also include gearboxes for wind power generators, and the company was originally founded to produce gears for Zeppelins and other airships. ZF is also quite dedicated to electrification of vehicles and autonomous driving overall, altogether demonstrating the company’s history and commitment with/to future-focused transportation products.

First introduced at the 2016 Consumer Electronics Show, ZF’s external airbag system can be integrated into vehicles and on the market within two years, according to Uwe Class, director of safe mobility systems at ZF, in comments published in an article in Popular Mechanics. Also mentioned was the fact that while several car makers have shown interest in the system, no contracts have been secured at this time. Given ZF’s long history in the automotive market, though, especially as a solutions-oriented company constantly researching and designing systems that improve driver experience and security, external airbags could likely end up becoming a “when” rather than an “if” as a vehicle feature.