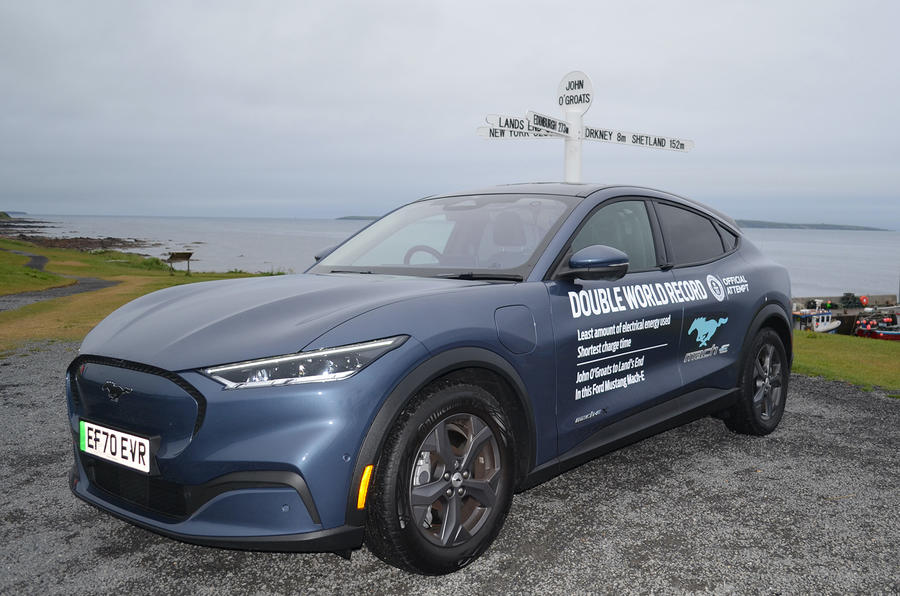 The Ford Mustang Mach-E recently achieved a noteworthy milestone. Following an 840-mile trip in Great Britain that required only two short charging stops, the all-electric performance crossover was able to set the Guinness World Record for EV efficiency with an impressive average of 6.54 miles per kWh.

The Mustang Mach-E was driven by BBC transport correspondent Clifton, Fergal McGrath, and Kevin Brooker, all of whom are well-versed in efficiency-focused driving. The team started their trip on July 3, and they completed the 840-mile journey after 27 hours on the road. Two short charging sessions totaling just 45 minutes were done over the trip: one in BP Pulse station in Wigan, Lancashire, and another in Cullompton, Devon.

It should be noted that the team averaged a speed of only 31 mph during their journey, making the trip very similar to a hypermiling attempt. The team also utilized one of the Mustang Mach-E’s Extended Range variants, which features a single motor powering the rear wheels and an 88 kWh battery. The vehicle in question has a WLTP rating of 379 miles.

Following the journey, the team stated that the EV efficiency record was all about demonstrating that electric vehicles are now viable for everyone, and not just for short trips around the city either.

“This record is about demonstrating that electric cars are now viable for everyone. Not just for short urban trips to work or the shops or as a second car, but for real-world use on long cross-country journeys. We’ve proved that, with this car, the tipping point has been reached. The Ford Mustang Mach-E’s range and efficiency make it an everyday car for tackling unpredictable journey patterns. We did a full day’s testing totaling 250 miles and still had 45% battery charge on our return,” the team noted.

Tim Nicklin, Ford’s UK electrification manager, was proud of the Mach-E’s achievement, stating that the vehicle’s feat has proven that the all-electric performance crossover was a game-changer. “The Mustang Mach-E’s efficiency minimized charging along Britain’s longest route and proved itself as a game-changer,” Nicklin said.

“Ford’s own Go Electric report on consumer perceptions reveals that the average range which the public thinks a fully charged electric car can travel is under 150 miles. If the Mach-E can achieve well over three times that distance in the hands of professionals, it can easily deliver its official’ miles per tank’ to owners – and dispense with any previous range anxiety,” he added.

Considering that the Mach-E’s EV efficiency record was achieved in a hypermile-style trip, it would not be surprising if other EV groups end up challenging this record soon. Back in 2018, for example, Tesla owners Sean Mitchell and Erik Strait set a Tesla hypermiling record by driving a Tesla Model 3 for 606.2 miles on a single charge. The trip lasted 32 hours, with the duo averaging a speed of 20-35 mph. German car rental company nextmove also set a hypermile record in a Tesla Model S the same year, traveling a total of 701 miles on a single charge for over 30 straight hours at a speed of 23.6 mph.