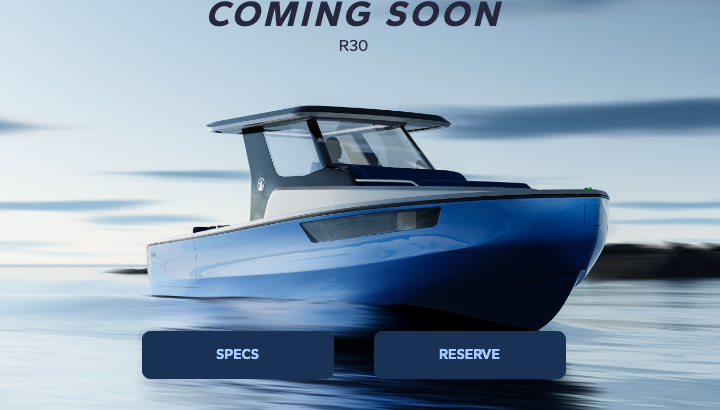 Former Tesla Head of Global Manufacturing, Jonathan Vo, is launching the R30, a 30-foot all-electric power boat with 800 horsepower, dual motors, and solar charging. In 2022, he founded Blue Innovations Group (BIG), which focuses on the manufacturing of all-electric boats and sustainable marine technologies.

BIG plans to manufacture its products at its facility in Pinellas Park, Florida, and will demonstrate its technology at the upcoming Consumer Electronics Show (CES) in Las Vegas, Nevada, which will take place from January 5th through the 8th of next year.

Teslarati spoke with Vo, who said his mission was an extension of Tesla’s mission. He said that the R30 was designed to be versatile and comfortable for the whole family. He explained that based on the frequency of how boats are used, it is designed to be “a truly sustainable energy power boat.”

“The R30 is a fully electric sustainable boat with a large solar system on it with up to 2.7-kilowatt–you’re probably going to have a pretty decent amount of charge if not full,” Vo said.

He added it was designed for the work-life balance for the entire family. “You can have privacy, office capabilities, and activities on and off the boat, such as fishing and diving.”

“We designed the boat to encompass the entire family dynamic.”

Teslarati asked Vo what inspired him to go into electric boats. He noted that while at Tesla, he didn’t know much about cars and that it was a learning experience and a success for his career.

Vo’s background before joining Tesla was in semiconductor, solar, and aerospace. A friend working at Tesla invited him to work.

“It was out of curiosity and helping a friend that I came to Tesla. I didn’t know anything about cars. I actually came to Tesla to work on batteries. I ended up moving to cars.”

“It turned out pretty good. To me, in my career, I have two choices. Either a success experience or a learning experience, and Tesla was one of those special ones that were both successful and learning”

Vo noted that when he began working at Tesla, some of his peers kind of joked since electric cars weren’t too familiar during that time. He added that Tesla’s impact on EVs was huge on the industry and changed how people think about the automotive industry.

“Not just automotive but the new level of expectations of what the car should do. Before Tesla, we didn’t talk about autonomous driving or about over-the-air connecting or software. Tesla raised the expectation.”

It was his work at Tesla that inspired him to take that same outlook on electric boats.

“Electric cars make a lot of sense, and electric boats are a no-brainer. Boats are ten times less efficient than cars.”

He added that boats have a higher maintenance cost than cars and his background at Tesla inspired him to eliminate this problem from the boating industry.

“If we can make the boat reliable and eliminate the cost of repairs and fuel consumption, it’s a no-brainer.”

He added that, eventually, more humans would turn to boats as the population grows. The earth is 70% water, so it makes sense to solve this problem.

“I think it’s just a matter of time before we will have to move to water, and we need to make sure if we move to that, that the solution is sustainable and ready for it. I think that is what makes our mission critical. It’s important to do that. And we have the skill set and experience to enable that.”